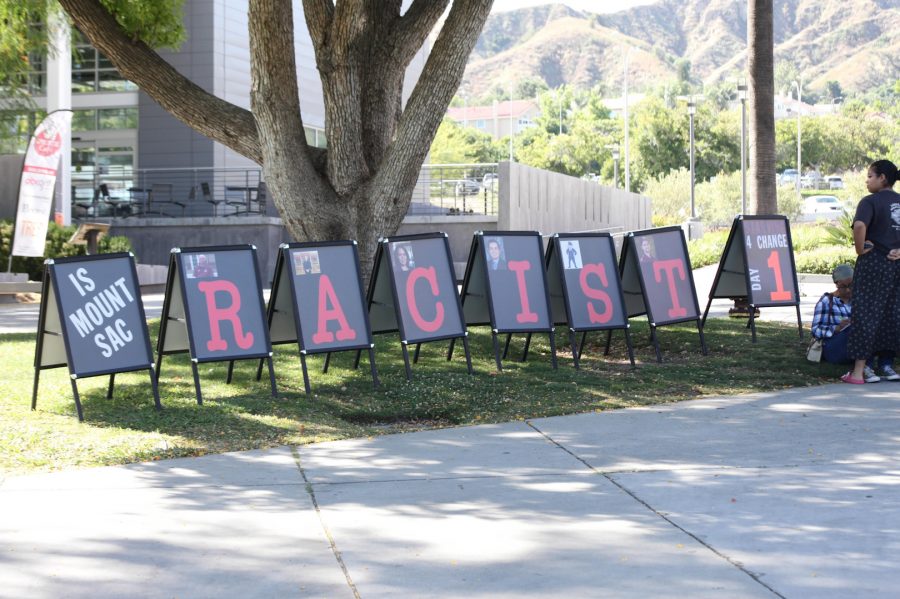 Eight a-frame signs were up on Kerr's Corner on June 2 spelling out, "Is Mt. SAC racist." Photo credit: Abraham Navarro/SAC.Media.

On June 2, three Mt. SAC students launched a protest in response to what they believe was biased treatment in the handling of a parking dispute.

Two years ago, Amani Mubarak and a student athlete were involved in an altercation over a parking space. As a result of the incident, Mubarak was suspended for the rest of the year. The student athlete was not.

“They gave me very aggressive punishment, while the other person did not receive that punishment,” Mubarak said.

Mubarak’s 18-year-old daughter, Mafaz Cossio, said that her mother was told she’d be arrested if she set foot on campus. Mubarak’s suspension was effective from May 2017 to Jan. 2018.

“She was seen as a threat to campus,” Cossio added.

To protest the outcome of the situation, which they believe may be a result of racial bias, the students set up eight display frames on Kerr’s Corner. Seven of the frames spelled out “Is Mt. SAC racist” and the eighth frame was titled “starving 4 change day 1.”

The last frame referred to the third student, who wished to remain anonymous. This individual was there to fast in protest of Mubarak’s treatment.

For the six signs that spelled out “racist,” each letter was accompanied by a picture of a Mt. SAC administrator. Mt. SAC President William Scroggins was among the administrators included on the signs.

Cossio said that they are hoping to get justice for her mother and for other people of color who might come on campus and face a similar situation.