Looking into the crossover sensation now overshadowed by his imitators 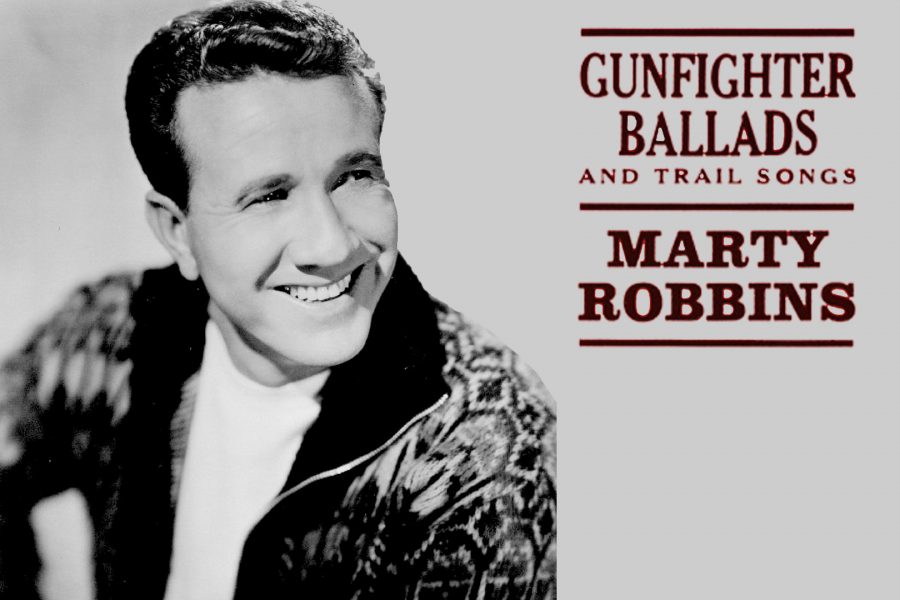 When some people think of country, they think of garbage. Music from rich metrosexuals out of touch with the working man.

That is not Marty Robbins.

Robbins was the last of an era. The era of western cowboys who never walked the plains, but sung as if they were down range. Where Johnny Cash is a household name for his crossover hits, Robbins remained in the shadows. His work is only found through pop culture asides.

In film, “Breaking Bad” named its 2013 finale “Felina” after the eponymous woman “Feleena (from El Paso).” It served as an homage to Robbins, an anagram for finale and a symbolic piece highlighting the tone of the series. That episode also includes Feleena’s origin story because it played “El Paso” in the opening act.

In video games, “Fallout: New Vegas” broadcasts “Big Iron” on all of its three major radio stations: Radio New Vegas, Mojave Music Radio and Black Mountain Radio. Only three others songs are played on the main three radio stations (“Heartaches by the Number,” “It’s a Sin to Tell a Lie” and “Johnny Guitar”).

“I was a lonely teenage broncin’ buck

With a pink carnation and a pickup truck

But I knew I was out of luck

The day the music died”

McLean also covered the song himself in his 1989 album “For the Memories Vols I & II.”

“El Paso” made Robbins the first crossover country artist in US music history and was the first country music song to be awarded a Grammy. He would later release 31 country hits in the 1960s with 13 crossovers into the pop charts.

If you ever wanted to know why artists like Taylor Swift exist and thrive as country crossovers, it’s because Robbins had laid down the Grammy path in 1961 with his 1959 hit.

Yet he was not a pop culture sensation. He was a country western ballad singer. The type that specialized in the Tex-Mex and Tejano genre.

With a pure yet hearty voice, Robbins will remind you of a youthful grandfather.

While any song on Gunfighter Ballads and Trail Songs (1959) is an exemplary testament to his vocal range, “El Paso” and its relative popularity does not do him justice.

Each of his musical numbers tell a story. While El Paso is probably the most fleshed-out story, it is not his most passionate or effective piece, and it is a national treasure with musical merits of its own.

The emotion that pours out of “They’re Hanging Me Tonight” will outplay “Folsom Prison Blues” in any decade, and even gives “Hurt” a run for its money.

When I hear that whistle blowing, I hang my head and cry”

“But those people keep a movin’

And that’s what tortures me…”

Cash sounds like a tired old man who got caught instead of a repenting criminal. And this lazy uninspired piece is ranked 51 on Rolling Stone’s 100 greatest country songs of all time.

Compare that trash to an actual heartfelt piece by Robbins.

“When I hear the rain a comin’ down

It makes me sad and blue

That Flo said we were through”

Robbins says “rain a-comin’ down” in such a way that it sounds like he is saying a mix of “Lorena” and “Laredo.” He then he accentuates “blue” adding to the melancholy.

He takes a breath after a shorter “through” but the story is coming together:

“I told her how I loved her and

I begged her not to go

But another man had changed her mind

So I said goodbye to Flo”

He takes a soft draw out for “and” but adds vocal harmony to accentuate “go” after his voice rose and fell ever so slightly on “begged.”

When he sings “another man,” he draws out almost anger in his quicker read of the lines, a contrast to the trail in “mind.” He concludes with a softer and slower read of his parting with Flo.

“Alone within my cell tonight

My heart is filled with fear

The only sound within the room

Is the falling of each tear”

Now we get into the meat of the song. You’ve already been captivated by the active voice and explanation of the breakup, so the tears hurt to hear. Unlike the insensitive killer in Cash’s piece, this man is broken down and is actually crying, not talking about crying.

His voice gets shrill when uttering “tonight” and his extension of “fear” haunts the listener. These vocal quirks are amplified by other subtleties like the break between “sound within the room” and “the falling of each tear,” which makes your heart break.

Though one quick pause, the total impact is noticeable and poignant – heavy emphasis is put on the tears and the narrator’s heart:

“I think about the thing I’ve done

I know it wasn’t right

But they’re hanging me tonight

His voice breaks at “know it” and his extended holding of “but” tears at your heart.

He then quickly ushers in “me tonight” at both times, quietly – as if he were muttering it under his breath.

“That night he came and took my Flo

And headed into town

I knew I had to find this man

And try to gun him down”

He slowly sings out “came” and has a sharper cut at “Flo,” as if to demonstrate anger at the woman who has left him for accepting the new man.

“Town,” “had,” “man,” and “down” all receive his vocal quirks to add more extended notes to his melody.

He continues to the reveal:

“As I walked by a dim cafe

And I looked through the door

I saw my Flo with her new love

And I couldn’t stand no more

I couldn’t stand no more”

His vocals get even shakier here when he sings “walked by,” and an unusually smooth “through” is cut off by the extended “door.”

He then repeats an accentuated “more” for emphasis in a quieter tone. This is as if to reassure the narrator as to why he broke down even further:

“I took my pistol from my hip

And with a trembling hand

I took the life of pretty Flo

And that good for nothin’ man

That good for nothin’ man”

He then gets even more unsteady in his vocals, stumbling on the words.

He pronounces pistol as “pistel” and stumbles on “hip.” He barely utters out an almost unintelligible “tremlin han” before detailing what he had done.

He sounds light and airy about his regret of taking Flo’s life, but his words are terse and angrier as he sings about the man. He even sounds like he tenses up in the recording:

“I think about the thing I’ve done

I know it wasn’t right

But they’re hanging me tonight

A repeat of the chorus, but a significant chorus that grabs the listener. Both are about the singer killing someone, but only Robbins can make you actually care about the killing and the killer. One is on the list, and the other is an actual artistic masterpiece.

The Rolling Stone’s list became a joke when it listed “El Paso” at 59, and “I Walk the Line” as number one.

Again, compare what the Rolling Stone considers the greatest country song of all time:

“You’ve got a way to keep me on your side

You give me cause for love that I can’t hide

For you, I know I’d even try to turn the tide

Because you’re mine, I walk the line”

Against a real emotional song where the singer’s love is clear and impassioned:

“Everyday has been uphill

We climb but we can’t reach the top

She just smiles when I want to stop

Lips, that are weary but tender

With love, that strengthens my life

A saint, in a dress made of gingham

Commentary here is not even needed; the songs speak for themselves. If you considered Cash to be one of the greatest singers of all time, you now know an artist who actually deserves that title.

Let Rolling Stone have its list for the feeble minded who want to hear simple repetitive ditties from an over-glorified boozehound.

Those who want to hear country western ballads in their purest form will turn to true talent, known as Robbins. A soul that was taken away in 1982 at the age of 57, before he could finish his third sequel to El Paso, “The Mystery of Old El Paso.”