Turnbull Canyon Road To Have New Grade Separation By 2023 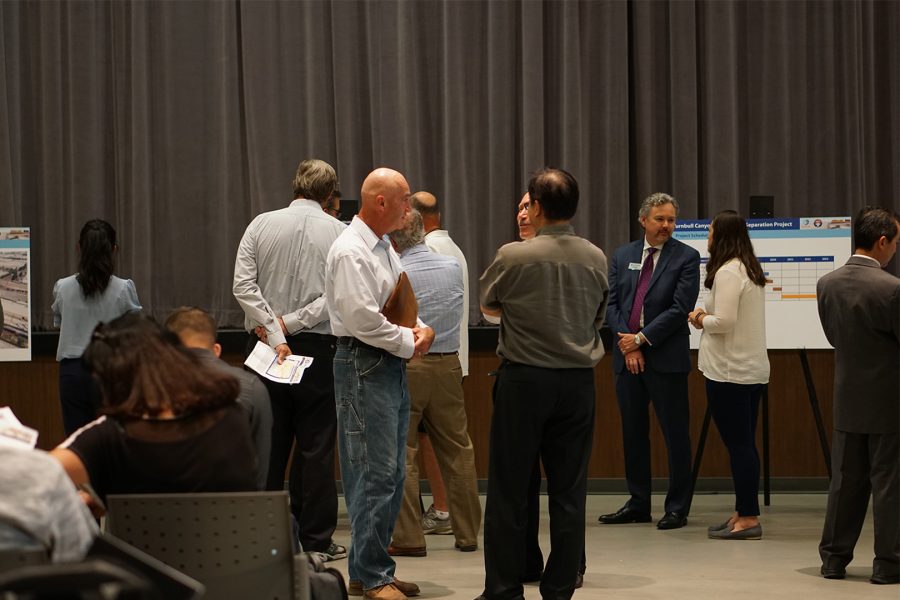 Residents gather inside the Hacienda Heights Community Center to hear from the project developers on July 17. Photo credit: Joshua Sanchez/SAC.Media.

In the days leading up to July 17, Hacienda Heights residents were provided flyers in the mail with an artist’s rendering of how Turnbull Canyon Road may look in 2023.

Residents were also offered one meeting at the Hacienda Heights Community Center on July 17 from 6 p.m. to 7:30 p.m. to provide input on the area.

Many in the community appeared against the proposal at the beginning of the meeting because no surveys were conducted or offered to residents. The lack of community input on the project had become a sticking point of the opposition, but Alameda Corridor-East project chief engineer, Mark Christoffels, said that this meeting would fix that.

The Alameda Corridor-East project group was appointed by the San Gabriel Valley Council of Governments. ACE has since worked on several grade separations throughout Los Angeles County.

Despite not being a formal type of presentation where one person lectures and fields questions, ACE responded to resident feedback in person and advised others to provide their feedback in writing.

Paul Hubler, director of government and community relations for ACE, said all written comments will be responded to via mail in the upcoming weeks. Hubler added that all comments, whether for or against the development, will also be made available at a later date.

The presentation was broken into multiple boards with an accompanying professional to explain the information. Each board outlined or addressed a specific issue, which included sections on the project timeline and impacted properties.

Residents were to come forward to each board individually and ask questions.

One of the project’s engineers said this style of interactive presentation was how ACE normally conducted their meetings, but several residents in the Hacienda Heights area were thrown off by this style of workshop.

One resident even asked, “Aren’t you going to walk us through the project?”

To answer that, Christoffels briefly explained the overpass design and referenced that more information will be provided at the presentation boards.

At the beginning of the meeting, a few residents spoke out against the lack of information and communication about the project.

Hacienda Heights Improvement Association’s Public Relations Committee Chair Lucy Pedregon asked Christoffels if there would be a microphone to be handed around to residents so that they could hear the concerns of other residents.

“I would like to hear everyone else’s comment to make my own decision,” Pedregon told Christoffels. “I want to know what you respond to that person by card; I’d rather hear you right now. ”

He then told her that everyone who signed in to the event will be able to access the provided responses.

As of July 29, there has been no reported contact with those that signed in, but that is subject to change.

Flanking the Turnbull Canyon Road intersection is the Seventh Avenue underpass to the west and Hacienda Boulevard overpass to the east.

Hacienda Boulevard encounters heavy traffic on its six lanes, with a singular divider in the middle. Housing developments in the area are backed against a large wall from the bridge, and the bridge extends from Seventh Avenue, which turns into Sunset Avenue north of Valley Boulevard, has five lanes with the middle lane serving as a left hand turn lane in both directions. The size of the road allows for two cars to temporarily share the shoulder lane which allows for right turns.

Turnbull Canyon Road, which ends at the tracks north of Valley Boulevard and continues far south into Whittier’s Beverly Boulevard after winding through hills, is designated as a five lane road until it passes Los Robles Road going south. This means, aside from having narrower lanes than the lanes of Seventh Avenue, it is most similarly structured to that road.

However, if this project continues to move forward, it will be getting an overpass instead of an underpass. The fifth lane will also be removed so that signs can direct drivers as they approach the two new options.

This overpass design reduces through traffic to two lanes across the intersection and leaves two lanes on both sides of the overpass free to use a knuckle U-turn before the intersection. This knuckle design is being used on the dead ends to allow for a wider turn radius for large trucks.

By ending both sides of Turnbull Canyon Road in a cul-de-sac, the engineers have created a way to send traffic that does not make it on to the single lane overpass to loop back around.

ACE Engineers told several residents in attendance that this solution makes for the least amount of impact on the property of nearby businesses and that this method allows for fewer acquisitions. These acquisitions would only take small portions of property adjacent to the road, and would be the first project for one of the engineers, in their roughly three decades of experience, that did not require extensive or full acquisitions.

There have been 14 incidents at the crossing over 42 years, which averages to one incident every three years.

The eight incidents that did not result in injuries date back to 1977 and the chart below explains all incidents in greater detail.

The most recent was on Jun. 9, which SAC.Media had covered live occurred seven years after the last incident; it was an injury.

The ACE Twitter for the project retweeted Brian Day’s KTLA article about the incident and included it on one of their presentation slides:

The project would potentially reduce 89 minutes of delay over the course of 25 train crossings each day. While it is estimated that 13,654 vehicles take the road daily, ACE engineers estimated a projected increase to 15,110 by 2025.

Train counts are also expected to increase by 150 percent by 2042.

Turnbull Canyon Road is also a main access point for parents to take their students to Los Altos High School without dealing with congestion on Hacienda Boulevard. Since it ends at Valley, southbound traffic towards the school is also lighter.

Locomotives would no longer use their horns which eliminates noise for those living in the residential area to the southwest of the crossing.

The project cost was originally estimated at $86.2 million on flyers, but as it stands, $1.697 billion is committed to the project.

The total cost of the project is expected to reach $1.781 billion as it gets closer to construction.

ACE representatives told residents that they are close to receiving clearance from the National Environmental Policy Act after having received California Environmental Quality Act clearance.

The NEPA clearance is needed because they are dealing with the storm channels which are of a larger jurisdiction.

They are planning on finishing design work in early 2020, and ACE has construction estimated to start in 2021 and last about two years.

The following audio does not encompass the whole event, as it was segmented into groups:

Below is a recording of the beginning of the meeting in video form.

Other officials from Los Angeles County were also in attendance to keep informed about the project, such as Art Correa, who works in the department of public works.

Correra serves as a county liaison. He helps provides input on four of ACE’s projects, including this one, and said he likes getting to hear what the residents have to say about the projects,

The county will be overseeing the aftermath of this project as the overpass is mostly in their unincorporated Hacienda Heights jurisdiction.

This article will be updated as more information is made available.