An Anchor In The Storm For Students In Need 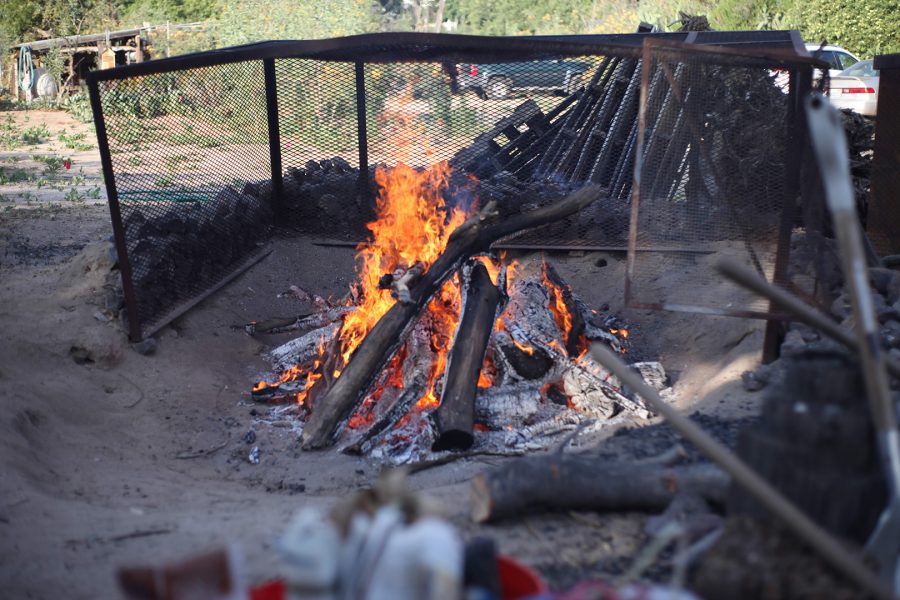 A bonfire heats up stones to be used in a sweat cerimony at Black Widow Ranch on June 15. Photo credit: Abraham Navarro/SAC.Media.

The woman, the wonder, the legend.

Frances Borella has been sharing unique experiences and teaching students outside of the classroom at Mt. SAC for 20 years.

Tall with salt and pepper hair, Borella can be found lecturing in front of her anthropology classes. She has studied the native Basque people in northern Spain for six months and knows a vast majority of the indigenous people in southern California.

“She must have been doing this her whole life,” you might think to yourself as she tells you of the Tongva people who had once called the land we live on their home.

But anthropology professor Frances Borella hadn’t always had her mind set on teaching as a career. Borella’s father left when she was a young girl, which meant her mother had to raise seven children on her own.

“That was always a concern, having money and not having what other people had,” Borella said.

Borella said that her mother “checking out on life” left her with abandonment issues, but added that she is thankful that she had great teachers at the time who urged her to strive for better things in life.

One such teacher she remembered was a teacher she called “Mrs. Rogers” at Agoura High School who talked her into starting college.

“Unfortunately, I got married right out of high school and dropped out immediately,” Borella said. “That marriage didn’t work, as you can imagine, getting married when you’re 19.”

Borella said that she came from a generation where getting married young was normal.

“Girls particularly got married early,” she added. “A career wasn’t that big a deal, and you were hoping a guy could just take care of you.”

She remembered getting married for security reasons, as the man who married her was a firefighter, and so she wouldn’t have to work. The marriage also got her out of her house and helped her escape the situation at home.

“I realized I wasn’t in love, and it wasn’t the marriage I was wanting,” she said.

After the divorce, Borella decided she would continue pursuing an education – the kicker being she now had two children to raise.

Going back to school was hard on her. Borella attended Mt. SAC, and back then not too many people who went to school had children. There were no pre-schools on campus like there are today, and there was no support.

“Teachers didn’t tolerate it when you were absent because your kid was sick or something, and so it was a challenge in those days,” she added.

Not having a job, Borella had to apply for financial aid which she said “all went to supporting my children.” She had to scrape by with what was left in order to finish her education at Mt. SAC.

“There were a lot of worries,” she said.

She remembered that after earning her degree at Mt. SAC and transferring to Cal Poly Pomona, she only had to take five quarters of classes before continuing to graduate school at UC Riverside. She added that she was thankful UC Riverside had student housing specifically for families.

“[It] was a lifesaver for me, rent was really cheap and all the people living in that neighborhood had kids,” Borella said and smiled. “We had a really supportive environment of students with kids who helped each other, and that was great.”

She continued her education, with the benefits of student housing, until she received her doctorate.

“One of the main reasons I decided to continue my education, and this is not a lie, was because I didn’t want to pay off my student loans,” Borella said. “So I kept going and going and going, and when I got my PhD, there was no more to go so I had to stop at that point, but that was awesome.”

She has a ranch now, but she maintains the supportive environment in her classroom and beyond.

Once a month, at certain times of the year in a hut made of willow and burlap, Borella could be found at her ranch in Riverside, which is called Black Widow Ranch because of all the black widows the property had when she bought it.

On her property is a hut made of willow branches and covered with heavy burlap tarps. In the center of the structure is a shallow pit, and across from the entrance is a bonfire pit with a cage that keeps the embers from the raging flames contained. This is Borellla’s sweat lodge.

Led by local elder Robert John, a sweat ceremony is hosted on monthly on Borella’s ranch for the local Native American community. People have attended these sweat ceremonies for reasons ranging from spiritual healing to mental preparation for surgery.

Borella first had the opportunity to join a sweat ceremony in graduate school and said that it really connected with her.

“Maybe my little genes that I have inside me or something really spoke to me,” she said. “I wanted to participate more and became a very active member in the native community.”

Now she has been a part of the native community in Southern California for over 30 years.

Borella is also faculty adviser for Mt. SAC’s Native American Intertribal Student Alliance. Most of her activities outside of school like cooking, baking and gardening lessons include students from NAISA, but anybody is welcome.

Christopher Guiterrez, 26, has attended two of Borella’s anthropology classes and many of her sweat ceremonies.

“She makes it very obvious that she values the education of the students that take her classes,” Guiterrez said of her teaching.

He referred to the lodge as a ceremony of healing and said that he appreciates how sweat connects everybody to each other as human beings and connects them to the earth.

“It’s a space for anybody,” he added.

Borella goes out of her way to make students feel welcome and heard throughout the year.

“Here on campus, I try to help students who are homeless with food, because food insecurity was a big issue for me as a kid,” she said. “Every morning from 6:30 to 8:00 I feed everybody who walks into my class: coffee, tea, breakfast, whatever. I just try and do my part to help.”

“It doesn’t matter if you have money or not,” Guiterrez said. “She offers you a [safe] place.”

Borella believes that humans are supposed to be social animals who live in communities and help each other. Every year on Thanksgiving, she extends an invitation to anyone who has nowhere to go to her home where she prepares a huge feast.

“I’m a great cook, and we literally clear everything out of the living room and put in tables and chairs and seat as many as 50 to 100 people,” she said. “I think sometimes students just need a little nurturing to be successful. And there’s so few places where they can get that.”

Students normally wouldn’t suspect anything of their professors at a glance, but if you look a little closer at Dr. Frances Borella, you will see that she goes far beyond what students normally see at the front of a lecture hall.

To some, Borella might be the anthropology professor who gave them a C, but to many others, she was a warm glow in what could otherwise be a cold experience at such a large college.