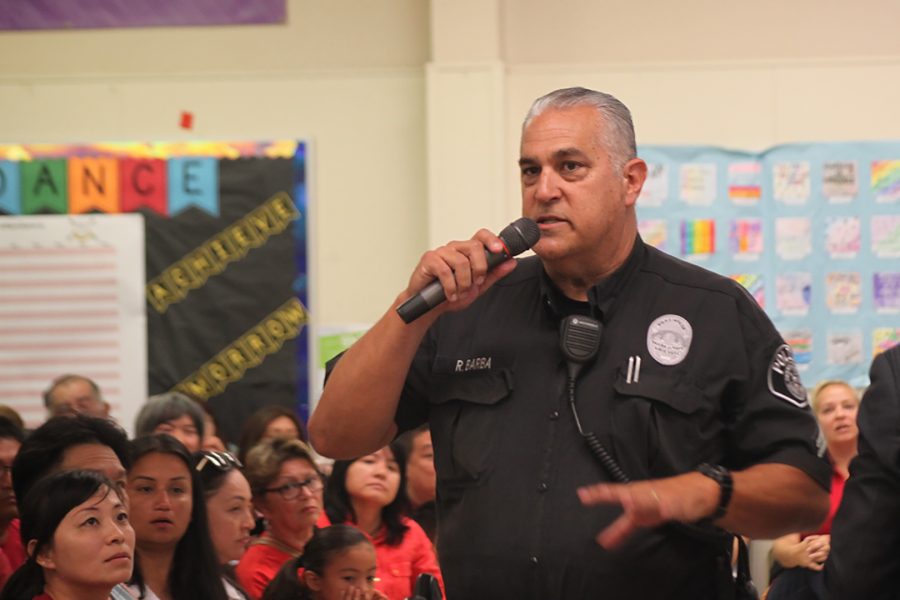 Officer Robert Barba calls order at the Wedgeworth Elementary School multi purpose room on Sept. 14, 2019. Several attendees had stormed off and been raising their voices up to this point. Photo credit: Abraham Navarro/SAC.Media

After two town hall meetings, residents on both sides of the 60 Freeway are further divided on a proposal to transform Wedgeworth Elementary School into a permanent school. The school of portables, which had its core campus buildings built in 1972 according to the PlaceWorks initial study, was the location for both meetings on Sept. 14 and Sept. 18.

Depending on who you ask, the school was either designed to be a temporary overflow school, or it was always intended to be a permanent place for educational purposes. Dates of origin are also a wash, with past Tribune coverage stating the school was built in 1959 as a temporary campus, but the initial study report stating the campus was not present in an aerial view in 1965.

Lines have been further divided into the prevailing point of view of “district residents” and “Wedgeworth parents” at the meeting, though a handful of individuals fall into both camps.

District residents argued that the expenditure of over $50 million for a new school is not equitable to schools throughout the district that also need repairs.

Wedgeworth parents argued back that their school does not have a cafeteria, that their meals are cooked offsite and shipped into the school, and that the ratios for the bathrooms are unhealthy for students and staff alike.

Both sides look to the Hacienda La Puente Unified School District for transparency and answers to the problems and concerns they are faced with.

Both are greeted by silence.

The board has taken no formal position on transforming the portable K-5 school into a K-8 school that can handle 1,200 students, and the board members have not offered official statements on where they stand about the project. At the moment, there have only been anecdotes about past board member Norman Hsu promising a permanent school, but both sides have picked board members they believe are sympathetic to their causes.

Board member Jeffrey De La Torre attended both meetings in full, and board member Gino Kwok attended the Wednesday, Sept. 18 meeting for less than half of its extended two-hour run time.

The only commitment the board has made to residents and parents involves verbal public comments in support of the Hacienda Heights Little League, but nothing in writing over what might happen to their fields. The league currently uses the Hacienda Heights Highlander Sports Complex, which is comprised of four fields and $1 million worth of infrastructure on land that is adjacent to the elementary school and is leased out to the league by the district.

Options being considered involve relocating the fields to other parks that are in various different conditions, like Manzanita Park, or deciding not to sell the land for 160 residential units.

While the meetings have said no funding sources are set in stone, it is believed by many that land from the Wedgeworth, Glenelder and La Subida school sites will be sold to developers for money and residential units that will fund the project.

District residents showed increased frustration at featured presenter and moderator Ricardo Mendoza of the Lee Andrews Group and the three professionals that shared the stage with him for the answers provided.

Mendoza was joined by facilities director Mark Hansberger, architect Marco Eacrett and a PlaceWorks representative for the environmental impact section. Dwayne Mears spoke at the first town hall for PlaceWorks, and Elizabeth Kim spoke at the second one.

Both sides also left the town halls dissatisfied with the other side.

District resident Fernando Cubillas called the push for a new school “nonsense” before the first meeting began, while Wedgeworth parent Hazel Ng asked him why he opposed a new school being built.

The two had a short but civil discussion about attendance metrics and equity, but the main meetings to follow did not go as smoothly as their conversation.

Despite Mendoza’s request for civility and that no one speak over the person with the microphone, several residents decried things they felt were lies and vented their frustration at the presenter. Wedgeworth parents then provided a chorus of shushes in response to the outbursts.

Both sides clapped when they felt a particularly angled question represented their group best.

At one of the town halls, someone asked why the Wedgeworth parents wore red and were “saving seats” for others, which received a later question/comment card response asking why others would care if they wear red or not with an added statement of “we like red.”

Officer Robert Barba even made an appearance when the Sept. 14 meeting was thought to have gotten out of hand, asking everyone to calm down for the sake of the children present.

Similarly, when questions broaching race and socioeconomic status were brought up, Mendoza asked that both sides respect each other for the children present.

Both custodians said they could see the situation from both sides, but the day custodian said the school only receives things after the other schools, and that the picnic area probably costs more than the rest of the school.

Still, district residents contended in the town hall meetings that the Wedgeworth site location was not important because of the strides and accolades the students and staff have made in spite of their situation.

Wedgeworth parents would say those strides and accolades are the exact reason they need the new school.

Neither party seems to budge on moving either the fields or the school, and both advocate for why they should remain where they are at.

The district also remains unmoved, with sparse public comments on the development. Their latest comments are only to say that the new school will not become a charter school.

The district’s inaction is leading one group of residents to hold meetings to on a recall effort, while the other group seems to be waiting for the district to take action.

While the group dynamics are different, both want answers and changes from HLPUSD.

Both are left waiting.