Take Me Back to the Beach 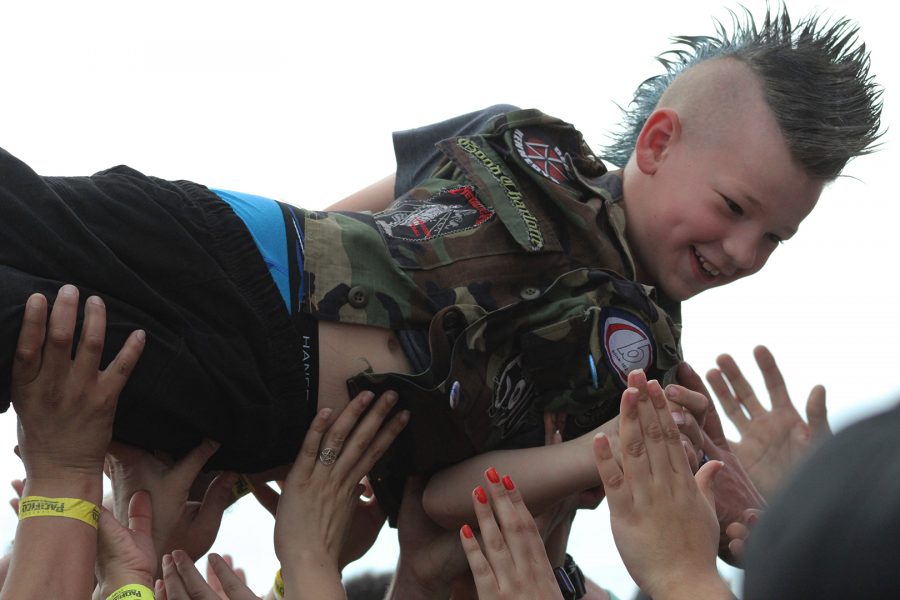 Kid with a mohawk crowd surfed at the Back to the Beach event in Huntington Beach, CA. He smiles as he is being passed on person to person. Photo credit: Andy Lizarraga/ SAC.Media.

What do you get when you mix the sandy beach with a weekend of fun, live music? Back to the Beach. On the weekend of April 27-28, The KROQ festival Back to the Beach, created by Travis Barker and John Feldman, made its second appearance in Huntington Beach. The music festival brought multiple bands and fans together by creating a lineup of only the most energetic bands the genres have to offer.

The festival, although sometimes geared more towards an older crowd, was also kid friendly. The “Lil’ Punk Kidzone” was a separate section that was designated for just families with children 10 and under that included photo opportunities with mermaids and healthier food options. It also gave women the opportunity to breastfeed in a private area while waiting for the next band to play.

The first day of Back to the Beach, Saturday, was a lot more ska-based. Veteran ska bands such as The Aquabats, Reel Big Fish and Goldfinger played, setting the mood for the rest of the weekend. Each band brought a unique sound for the day as they opened up for the day’s headliner.

One of the most anticipated bands to play was female-lead Save Ferris. As Monique Powell danced onto the stage, the band opened up with the popular tune “Spam.” Powell’s energy on stage brought fans dancing with each other, singing along to all of their songs. Throughout the set, Powell began to “shed” her clothing, each layer getting more and more revealing than the one before.

As the sun started to set, Blink-182 took the stage and the rest of the day into their own hands. With this year being the band’s popular album “Enema of the State’s” 20th anniversary, Blink-182 played it in its entirety, bringing back nostalgic vibes to those in the audience.

A handful of some of the songs being played were a lot of firsts for the band. According to the website Live for Live Music, “Aliens Exist” was new guitarist Matt Skiba’s first time playing that song live. The tune “Anthem” was also heard after not being played since 1999. With “Dammit” being their final song, the first day of Back to the Beach was a major success.

The second day of the festival brought both new and familiar faces to the audience. With a whole new lineup, Story of the Year, The Story So Far, and Anthony Green, everyone was excited to see who was opening for The Used.

Although day two of the festival was alternative-based, one ska band managed to find its way into the lineup. Less than Jake is a band formed in 1992 that focuses on a brassy section and an engaging live show. Their energy was absorbed by the audience as they began to kick up the sand in the circle pits that start forming.

The best time I had on the second day of the festival was watching The Wonder Years play. As soon as they strummed their first chord, I felt like it was no longer a concert, but it was a performance. The Wonder Years had the most emotion and feeling out of all of the other bands on the bill. Their lyrics, full of both hurt and passion, brought out the inner sad emo kid in all of us.

As the night began to come to an end, the pink sky illuminated the stage as The Used started their set. The Used had fans trying to get as close to the stage as possible, crowd surfing to the sound of their favorite songs.

There will never be anything better than a weekend of your favorite bands, no matter what genre you listen to. This festival brought music and family together and created memories that will last a very long time. Until next year, Back to the Beach.