Give Video Game Music Some Love

Video game music is not a throwaway experience 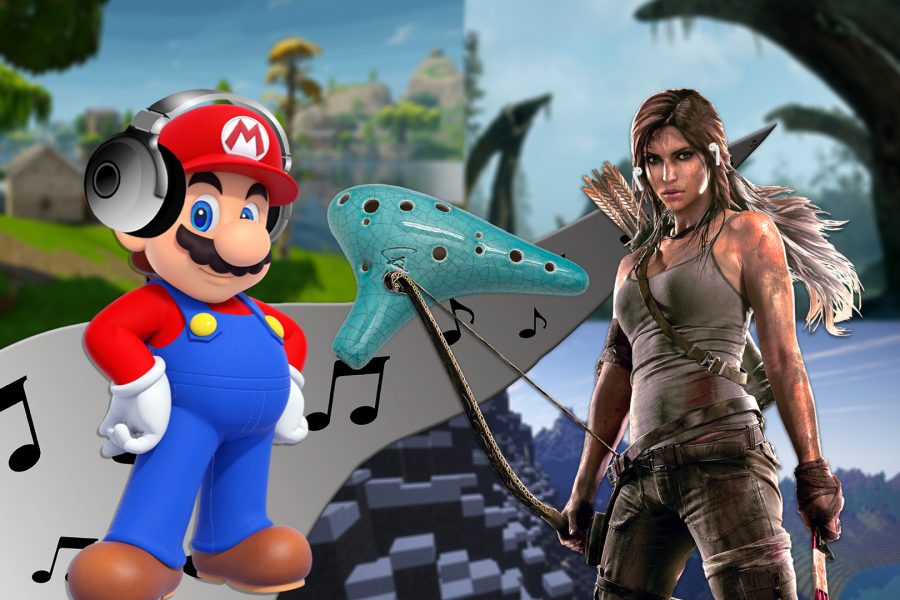 When people think of music, they typically default to popular, established bands and singers. That’s fair and to be expected, but I feel there’s an area of music that doesn’t get the respect it deserves. I’m talking about video game music⁠—VGM, for short. There’s a wealth of amazing VGM out there just waiting to be discovered. I spoke with Skye Salamat, music editor for SAC Media, about this, and she admitted that she doesn’t know anything about games or VGM, so she seemed like the perfect subject for some VGM exposure. I’ve drawn up a list of 10 great VGM selections for Skye to listen to, and she’s going to share her thoughts on each entry. Hopefully she likes them; otherwise we won’t be friends anymore.

Quick note: these songs are not in order of preference; this is not a “Top 10” list. Also, just to clarify, VGM refers to original music made specifically for a video game. Not licensed music or music made in the style of 8-bit.

We have deleted a previous tweet due to ongoing confusion in a campus threat at @CSULB. We will update as soon as newer information becomes available.

Chris: This song plays during the introductory video of “Chrono Cross.” I fully admit that I may be a bit biased here; “Chrono Cross” is my favorite game ever, but I think this is a damn fine song. It starts off slow and serene before switching gears into a more percussive, combative sound, almost like the song is recounting a tale. What I like the most about this song is how well it fits the feel and aesthetic of the game. The same can be said of everything on this list, really. The tribal drums are a big plus for me too. I’m a sucker for tribal drums.

Skye: Wow. So I love this. It starts off quaint, and I feel like I’m in a rural Japanese village straight from a Studio Ghibli movie. And then, as you said, the gears switch, and we get this energetic and somewhat ethnically ambiguous beat over an incredible violin–is that violin?– solo. I, personally, am a sucker for a good transition, and this song has a bunch of them, starting off slow, reaching a lively climax, and then returning to its slow tempo for a bit. By the end, I felt like I had experienced an entire lifetime over two minutes, with ups, downs, and a dance break somewhere in between.

Chris: I’m so grateful for this song. I had never played a “Persona” game before, and the franchise wasn’t even on my radar. Then I listened to “Beneath the Mask.” After hearing this song, I immediately set out to play “Persona 5.” I’m glad I did; the game is fantastic, but that’s a story for another time. This song is gorgeous. It’s so calm and relaxing with a touch of melancholy and mystique. “Beneath the Mask” played whenever night time would roll around in the game, and it never got old, no matter how many times I heard it.

Skye: This one is great; it’s groovy, jazzy, and doesn’t sound far from the non-VGM I listen to on a daily basis. The chord progression is so smooth and loungey, and I can perfectly imagine it playing in the background of a Friday night mocktail party with the girls–we’re not 21 just yet. The vocal is reminiscent of Sade with its soulful ’80s vibe. Also, the lyrics are genuinely good: “I can’t tell you how to see me / Just a cage of bones / There’s nothing inside.” So angsty that you can’t help but imagine Morrissey singing it.

Chris: This song is so good, it’s stupid. Peaceful, mysterious, and wondrous, this piece transports you to a fantastical land brimming with awe-inspiring sights. The song is great enough on its own feet, but coupling it with the environment it plays in is an experience I won’t soon forget. Listening to this song while travelling through the frozen, alien landscape of Sylvalum, replete with green, globular flora and ethereal light dancing all around me, is one of my favorite memories of “Xenoblade Chronicles X.”

Procure some bass for this one.

Skye: This song is epic, both in the classical sense of the word and in the “bro, that was epiiiic” sense. Though I can’t speak on it from a game stance, it does feel like this song is telling a story. It’s cinematic, feeling like a grand overture at the beginning of a movie, whimsical with its little bells chiming, and even has a trap-like quality in my opinion. It’s this hodgepodge of different musical styles, and it works. Really well.

Chris: This one is a change of pace from the previous entries, but it’s awesome in its own regard. “Einhander” is a criminally unknown side-scrolling shoot ‘em up from Squaresoft. The game has techno, action, and explosions all throughout, which is great, but “Einhander’s” OST, or original soundtrack, is what hammers it home. “Bloody Battle” offers up a badass techno-heavy sound with a driving percussion that takes everything I said about the game and puts it in music form.

Skye: This is the coolest VGM track I’ve heard so far. It has that, for lack of better wording, ’80s VHS aesthetic that is present in everything today, from the Stranger Things score to the music of experimental rock band The Voidz. You can hear its basis in house music and D&B, but in a way that generates good-natured anxiety trying to beat the boss level on your last life. When parents are talking about their kids’ video game-induced hyperactivity, this song is exactly what they mean.

Chris: Speaking of badass, this song has badassery in spades. I don’t think I’ve heard a piece of VGM with a sound more grandiose than “Ludwig, the Holy Blade.” This song is a perfect example of what great music can do for a boss battle. “Bloodborne’s” composers used orchestral instruments and a choir to masterfully craft an epic theme drenched with malice and horror that creates a sense of scale I rarely ever hear in any music period.

Skye: Grandiose really is the perfect word to describe this! Though opera is not my cup of tea, I can totally appreciate the larger-than-life grandeur of this song, especially in the heat of a high-stakes boss battle. Let’s be real, though–with my video game skills, or lack thereof, it’s not likely that I would get to hear more than twelve seconds of this before being defeated.

Chris: This was so hard. Choosing just one song from the first four “Silent Hill” games, the ones made by Konami’s long-dissolved Team Silent, is near impossible. The music in these games is so good that it’s safe to say the experience of playing them just wouldn’t be as impactful without it. You won’t find a “Silent Hill” fan who doesn’t know the name Akira Yamaoka. He’s the man behind the series’ soundtracks. Yamaoka’s music is so dark, melancholic, mysterious and creepy, it effortlessly creates a feeling of being alone in a town rife with horrible secrets.

Skye: Ok, first off: the thumbnail for this is super creepy. I’m trying to disregard it, but Robbie the Rabbit is literally sucking the soul out of me. If mysterious space jazz was a genre, this would be the perfect introduction to it. Final thoughts: the beat is very versatile, and it would sound great mashed-up with Beyoncé’s “Partition.” I said what I said, and I meant it.

“The Elder Scrolls III: Morrowind” – “The Road Most Travelled”

Chris: Morrowind is better than Skyrim. Fight me. Morrowind, right down to the music, gave a better sense of going on an adventure than Skyrim ever did. The Road Most Travelled is a calm, beautiful piece that welcomes you to Morrowind’s world of fantasy. There’s a distinct feeling of wonder present in this song that is sadly absent in a majority of fantasy RPGs these days. I can’t deny that the game hasn’t aged very well, but its soundtrack sure as hell has.

Skye: This one is majestic and adventurous: standard fairytale music. It fits right in there with John Williams’ Star Wars score and the Pirates of the Caribbean theme that you can’t seem to get out of your head. Something I’ve noticed about these tracks is the wonderful violin solos over percussion–it’s what makes VGM sound so progressive and inventive compared to the same pop melodies on the radio being regurgitated in the name of sampling.

Chris: Composer David Wise put together plenty of great music for this game, but I could choose only one song, so I went with “Hot Head Hop.” The beat is just so infectious; I can’t help but tap my foot while listening to this track. It’s got a hint of funk too, who can resist funky things? The song simply oozes fun and whimsy at every turn.

Skye: Donkey Kong! A game I actually recognize! I agree with you, “Hot Head Hop” definitely has this whimsical funk thing going on. Coupled with bubble sound effects and classic early R&B drums, we get this fun tune that makes you want to break out and dance in some avant-garde performance art piece. Even though I didn’t grow up playing this game, there’s such a strong nostalgic quality the song that reminds me of childhood adventure and imagination.

Chris: This song plays during the credits of Bastion, and is a combination of two other songs heard earlier in the game, Mother, I’m Here and Build that Wall. This song is excellent. It’s equal parts beautiful and sad, with both feelings being simultaneously expressed by the music and the wonderful vocals. I adore the drums as well. They have a unique sound that I’m not quite sure how to describe. I’ve heard hundreds of ending credits theme songs, but Setting Sail, Coming Home is one of the few that stuck with me.

Skye: This totally reminds me of the ’90s grunge my mom would listen to when I was a kid–and still now, just on Spotify instead of cassette. I think this one is going to grow on me; it’s not my favorite right now, but those harmonies have the potential to stay in my head for days. It seriously sounds like a Stone Temple Pilots song with its rough vocals on a smooth, driving beat. I think a male-female duet is a hard thing to pull off in a non-jazz setting without sounding too cheesy, yet this VGM track somehow gets it right.

Chris: Not a flashy name, I know, but man, this song is epic. It sounds like you’re going into battle against something from the depths of hell, a demon set on burning all life to ash. Picture this: you step onto a volcanic battlefield, this music starts to play, and you watch a decidedly evil-looking crimson dragon rise from a bed of lava amidst pillars of fire. That’s precisely what happens in the game. Breathtaking.

Skye: The perfect way to end it all. Listening to it on its own, this is already a very intense track. But when you give me the backstory–a sinister dragon rising from volcanic spewings? It takes the song to another level. Which level? One with epic cymbal crashing and a full choir.

Chris: That’s it for my part. It was pretty hard to pick out a measly 10 selections, but I’m reasonably satisfied with the list. What do you think Skye? Do you have a new-found respect for VGM? I still have hundreds of songs I can share.

Skye: Bring them on, Chris! This list has really shown me the diversity of VGM, and I loved being able to hear VGM’s roots in jazz, disco and opera. I can say that I genuinely enjoyed listening to your curated VGM tracks, so I guess that means we can still be friends!