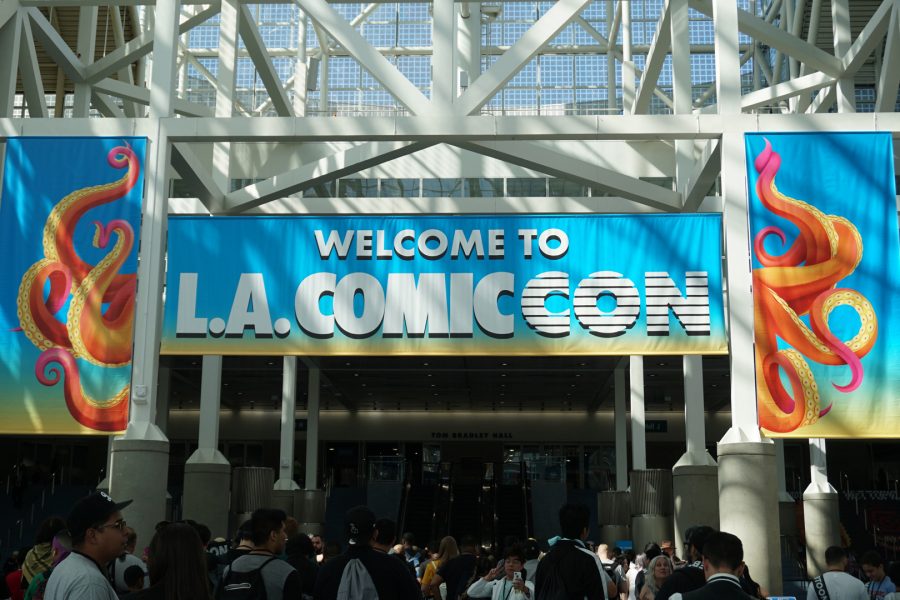 Come one, come all and walk into a world where Gandalf can be heard shouting “I like tacos and guacamole!” For lunch, deep conversations with Wonder Man and his boyfriend about The Penguin’s development in FOX’s “Gotham” are on the menu. Then, while browsing Artist Alley for some merch, selfies with an anime protagonist or two are widely accepted. Of course, no nerd gathering is complete without a parade of Deadpools and their leader, identified by his Hello Kitty backpack, cheerily distributing fist bumps. From Oct. 11 to Oct. 13, LA Comic Con was a three-day event where fans could celebrate their fandoms with their favorite characters.

From 6 a.m. on Friday to 5 p.m. on Sunday, the cosplayers were boundless. Just by arriving onto the floor before the show starts, fans could peer over the convention center cafe’s balcony and play a virtual “Where’s Waldo” of their own making. For cartoon lovers, Dipper and Mabel Pines visited from Gravity Falls, Marshall Lee dropped in from the Land of Aaa and the Fire Nation’s Painted Lady blessed passing photographers. Questing gamers could find enough Halo soldiers to form a platoon, a few Bowsettes to call waifu and a pride demon away from its post. In the horror section, there were the usual suspects with post-prom Carries and various Jason incarnations. However, there was also a surprising amount of youth with one 5-year-old Pennywise clinging to his red balloon and a living Annabelle doll in her very own mobile containment box. Among these crowds of characters, even Freddie Mercury made an appearance, bringing his own portable speaker with popular Queen songs on a loop.

DC and Marvel fans, of course, dominated the floor with a plethora of heroes and villains. In the main hall, Captain Marvel and Black Canary checked out each other’s skin-tight, leather suits. Over by the comics, Loki and the Riddler bumped staffs. Before the main stage, Constantine and Doctor Strange compared light-up incantations. And with their rise in popularity, the most common comic characters this year were Miles Morales and the Joker⁠—both the classic Mark Hamill’s and the more recent Joaquin Phoenix’s.

What truly makes these cosplayers fantastic, though, is how these temporary personas can be so much more than putting on a costume and posing for a few pictures. Take Loki for example, also known as 22-year-old college student, Alexa Paul. While one of her other costumes took her a mere week to create, this particular cosplay took over a month. She could be found hunting for parts of her outfit in Goodwills and thrift shops, or making armor by carving crafting foam, all while balancing work and school.

When it came to why she chose to bring Loki to life, she said that she really related to him and loved how many layers there were to his character. And with the way cameras have a tendency to flash around her, she clearly isn’t the only one who favors Marvel’s most popular mischief-maker. Prior to the main floor being opened, photographers passed by frequently asking for shots, and she had a dazzlingly confident pose prepared for each of them. And the fascinating part of it is that this is how a lot of this confidence comes with the costume.

“With my anxiety, when I first started it was uncomfortable, but…in cosplay it’s easier, because I don’t really look like me,” she said with all evidence of the Norse god’s charisma wiped from her features.

However, not all cosplayers are cut from the same cloth. For David Garcia, 43, cosplay has been woven into his life since he was a child. Growing up, he was teased for being girly, but looking up to characters such as Wonder Woman and Bionic Woman helped him through it.

“They were strong, but gentle; they were feminine and they were caring, but they still kicked ass and they were still able to save the day,” he said, “So, it kind of helped me as a kid to realize that it’s okay to be a little bit feminine because you can still be a badass and girly.”

The Wonder Woman costume he wears today can almost be seen as a ten-year-long tribute to this time in his life. From a costume he had assembled at its most basic, Garcia developed it further by adding a cape, a corset, and armor⁠—all of which are made of real leather and metal. What started from sewing lessons with his grandmother became something so much more. Today, he’s often greeted as “Wonder Man” at conventions and carries business cards displaying one of the costume’s older phases. As a costume designer himself, one of his favorite parts of going to conventions is how “people can see the same character 20 different ways” with artists and cosplayers alike.

There’s no place in the world where this is more evident than in Artist Alley. Every fan-focused convention has one, and every single one forms a nice little market for creative vendors to sell a variety of wares. As per usual, there were posters and prints to hang on one’s wall, and pins and stickers for those who want something a bit cheaper. There were also the many writers and artists promoting their comics, with a few even offering free books.

What’s great about Artist Alley though, other than how it acts almost like a homing beacon to cosplayers, is the fact that there’s a hidden gem for everyone. Avid readers could find a place in booth that sells earrings, charms, and even refrigerator magnets modeled after their favorite books. Fantasy fans can grab a pair of wire elf ears or maybe a hand-painted dragon figurine. Gamers could stop by a booth and stuff their pockets with Nuka bottle caps. A few tables away, queer D&D players could get a pin that displays both their allignment and a d20 with their chosen pride flag colors. Even for those looking for something practical, there are body pillow covers, tote bags, bookmarks, and standees that can be written on with dry erase markers

Obviously, all of these great items to add to one’s inventory wouldn’t exist without the people on the other side of the tables. For Gigi Rockets, 38, selling at conventions has been a part of her life for five years. Each of her paintings are hand-painted and often use special paint that reacts to blacklight. While her 4 inch by 4 inch canvases usually take two to three hours to paint, bigger pieces can take anywhere from six to eight hours to complete.

She wasn’t the only one creating her own inventory at the convention, though. With a quick walk up and down the aisles, one could find handmade leather collars, hand-sewn plushies and crocheted octopuses. If the items available were not quite to one’s taste, many booths accept commissions—some of which could be fulfilled within the day. One booth even offered quick sketches of attendees as their favorite characters. With this active bazaar of fans seeking items to fulfill their itches for merch, Rockets said that her favorite part of conventions is being able to meet new people and getting to know about what’s new and trending in culture.

For other artists, however, conventions provide an opportunity to meet people already familiar with their work. Starting from 2010, 28-year-old Jenny Park has become a common sight at conventions. Over the past nine years, she has made this her full-time job, attending an average of about 20 conventions per year. And with the size of LA Comic Con, it wouldn’t be unusual for her to earn thousands of dollars over the three days the convention was live. Along with this, conventions allow the local handful of her 13,000 Twitter followers to meet her in real life.

“I enjoy meeting people who like my work online,” she said with a proud glimmer in her eye. “It’s really good to meet them in person…to me, doing conventions is really hard, but meeting fans is always the best part.”

That’s really what gives LA Comic Con its character: fans flocking in and sharing their enthusiasm with others, whether it be through taking pictures with cosplayers or chatting with artists. It creates this sense of community that one wouldn’t be able to find anywhere else outside of the internet. Everyone is smiling, and a feeling of acceptance washes over fandoms, big and small, as nerds and geeks bond over connections as small as a pin on a bag.