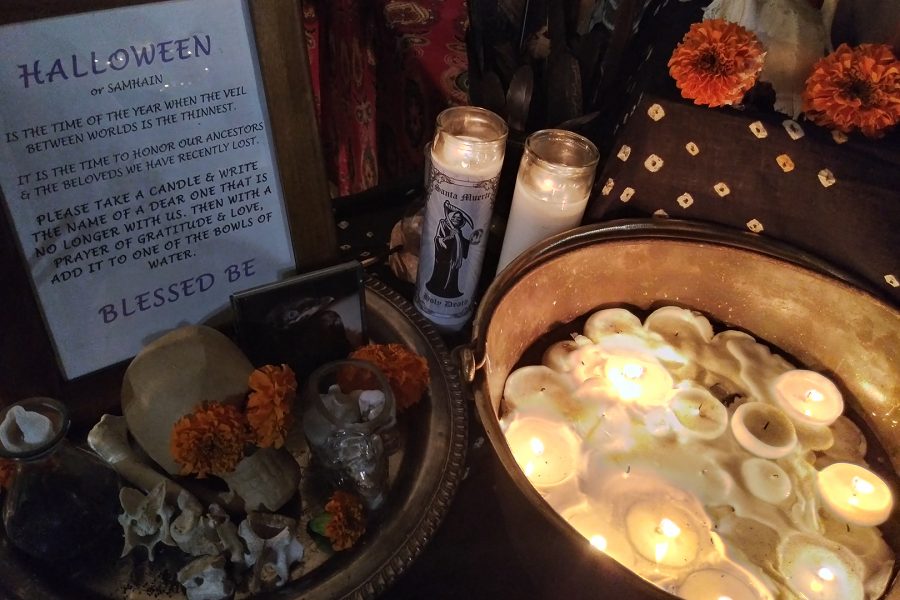 A booth at Witch Walk DTSA set up a place for people to send their prayers beyond the veil in observance of Samhain. Photo credit: Leni Alexi Santos/SAC.Media.

In the alley of Broadway and 2nd, street lamps lit a hidden path for those who meddle with magic. From 5 p.m. to midnight on Oct. 19, witches were welcomed into this cozy corner of Downtown Santa Ana.

So witches have had a pretty bad reputation for the past few centuries. However, visiting Hype Priestess’ Witch Walk for an hour or two might be able to change anyone’s views regarding the practice of wicca. While witches can meet with others for spell bottles, crystals and other spiritually enhancing wares, non-witches can get a first-hand look at the culture beyond the dramatized roles presented in television.

While Key and Clover, The Melancholy Aries and Drunken Unicorn Apothecary might sound like taverns and shops from a “Dungeons & Dragons” session, they’re actually vendors that could be found at Witch Walk. To the left and right, booths are set up with all sorts of goods and services for the well being of one’s spirit.

Crystals came in all shapes and forms for buyers. In one booth, natural crystals were sold with descriptions for how they can help one’s life; in another, amethyst was being recommended to connect to higher beings, and there was black obsidian for people hoping to draw away negative energy.

In Hype Priestess’ booth, crystal knives are sold alongside crystal dicks. Yes, crystals in surprisingly detailed phallic shapes are sold in various colors and sizes in the event founder’s booth. One booth even had an array of spell bottles to use for protection, relaxation, love or fortune. Then for the witches who prefer to do everything themselves, a booth gives buyers the ability to “mix their own magical tea blend.” There were also pendulums for those who practice pendulum magic, tarot card decks for those who do readings and homemade spell candles to enhance a witch’s abilities.

Speaking of which, readings were also offered all over Witch Walk. Multiple booths offered tarot card readings, with most of them costing about $25. Aural cleansings to cleanse and heal the soul are also a common sight, and sound, while walking between booths.

One vendor even offered a $10 discount for children. Close to the fountain in the center of Witch Walk, a booth offered ancestral readings, allowing people to look far into their family’s past and what it might mean for them.

Across the way, a booth had signs put up for animal communication, where a person could show the booth’s owner a picture of their companion and be able to communicate to them through her. Next to her, a vendor offered dream interpretations and spirit counseling to better understand the hidden messages you might not have even known you were missing.

There’s a ton of items for people not looking into getting into wicca as well. In fact, while many of the businesses are run by witches, there’s meant to be an emphasis on inclusivity. This includes multiple “Diversity Inclusion Groups [which] range from Black, Indigenous, and People of Color, LGBTQ+, age, body type, ability, etc. owned businesses.” In booths owned by those who may not identify as witches, one might find art prints and pins.

For shoppers who don’t identify as witches themselves, jewelry can be found as well as beard oil and massage oil. Homemade bath bombs to soothe one’s stress away and bundles of sage are offered for a quick cleansing of the house – one can never be too safe regardless of belief.

Of course, with the most recent event landing in the middle of October, it wouldn’t be a true gathering of witches is there weren’t cloaks to be found until midnight. Usually, Witch Walk runs on the third Saturday of each month from 5 p.m. to 10 p.m. This time, however, the hours were extended in honor of Halloween/Samhain/Día de Los Muertos.

And it wouldn’t make sense for an event hosted by someone whose alias is Hype Priestess to not be packed full of energy. The opening ceremony brought on a performance by Grupo Folklorico Tzicuri from El Centro Cultural de Mexico, a volunteer group based in Santa Ana. T

Throughout Witch Walk, three gift baskets were then given away and three costume contests were held. While there were winners in the children and adult contests, pets made an impression with the sheer number of people bringing in contenders – a couple of the more noteworthy ones being a pretzel and Georgie with a red balloon. Finally the night ended with two hours of dancing and music for all the souls who stuck around to party.

While this event could indeed be summarized as a simple art walk featuring witches being themselves and having a good time, the real reason behind it’s power can be found on Hype Priestess’ website: “We are actively taking back our power as Womxn, BIPOC, and marginalized people who have been silenced through Euro-centric colonial mindsets. We know we cannot fix the world, but this is a space where we can make moves towards righting some wrongs.”