Mounties Make Their Mark On The Road 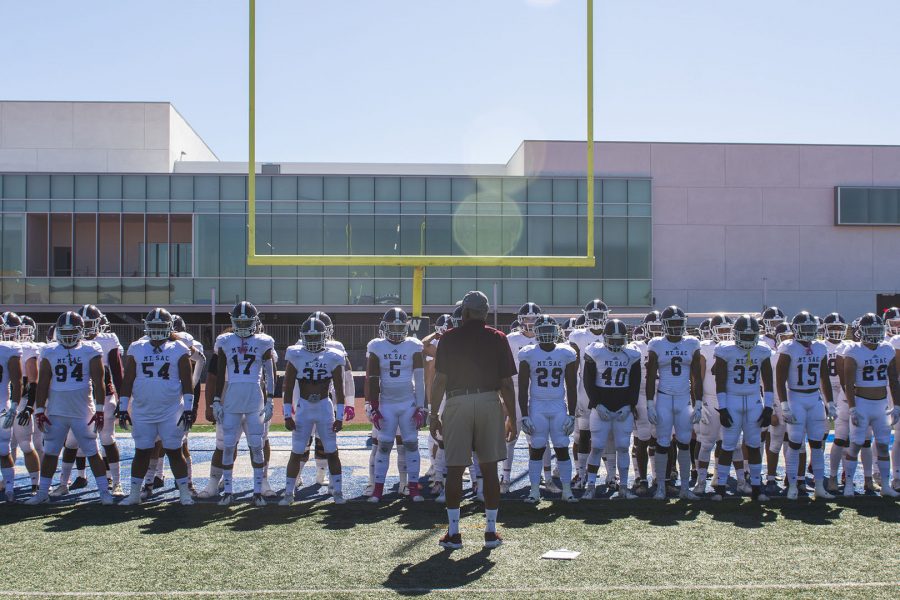 The Mt. SAC Football team (5-2, 2-0) was able to come away with a dramatic comeback victory over the El Camino College Warriors (5-2, 1-1) to increase their win total to 2-0 in conference. The Mounties were able to rally a comeback in the fourth quarter after trailing the entire game to El Camino. The match was a back and forth affair. The final moments of the game were filled with suspense when the Mounties took the lead. The Warriors went into halftime with a 31-21 lead, but were held to only three field goals by the Mt. SAC defense in the second half.

The Warriors took an early 10-0 lead in the first quarter after an ECC field goal was followed by a pick six off Mt. SAC quarterback Zach Rangel. The 28-yard touchdown return by Warriors linebacker Justin Sanchez seemed to give all the early momentum to El Camino until the Mounties quickly responded by capping an 11-play drive that began on their own 15-yard line.

The drive ended with running back Rachaad White’s 11-yard touchdown run. On the ensuing drive, El Camino was forced to punt after a three and out, but after a miscue by the Mounties’ special teams unit, they were able to retain possession. El Camino was able to recover the live ball because it was touched by a player on the Mt. SAC return team. The Warriors were able to take advantage of the extra possession and scored via a 13-yard touchdown pass from quarterback Jerman Gotoy to wide receiver Dion Moore and made the score 17-7.

After a Mt. SAC punt and an El Camino turnover on downs to start the second quarter, Mt. SAC’s offense began to find its rhythm. Following a 15-yard penalty against El Camino, Rangel connected with wide receiver Jonathan Schofield for 21-yards, and two plays later found White for a touchdown, also for 21-yards.

On the following Warrior’s possession, El Camino freshman quarterback Jake Novello was introduced to the game for the first time, and on his only drive of the game, he was able to produce a touchdown drive for the Warriors. El Camino running back Keyshawn Dupree scored from the 2-yard line, following a fourth and 18 completion for 26-yards by Novello. During his short time in the game, Novello was able to complete 5 of 6 passes, and two of those were for 25+ yards, which was no easy feat against the tough Mt. SAC secondary.

After both teams exchanged punts midway through the second quarter, the score line was 24-14, when White broke off a long touchdown run for 47-yards to bring the Mounties within three points. The UCLA-bound running back’s third touchdown of the game brings his total rushing touchdowns for the year to six. White finished the game with 121 rushing yards to go along with his two rushing touchdowns and touchdown reception.

The Warriors promptly responded with a highlight play of their own to end the scoring for the first half. With less than a minute left in the half, El Camino was inside the Mt. SAC 20-yard line, when Gotoy scrambled away from multiple defenders and found his wide receiver Isaiah Jones in the back of the end zone to put El Camino back up by two possessions before the half. That would be the last time the Warriors found the end zone for the rest of the game.

Mt.SAC got things rolling late in the third quarter. After a made field goal by El Camino, Rangel threw a perfect 39-yard bomb into the hands of Schofield to bring the score to 28-37, with less than a minute left in the quarter.

On the ensuing drive, El Camino again was held to a field goal, and when Mt. SAC got the ball back, they wasted no time in finding the end zone. Once again, Schofield scored for the Mounties, hauling in a tremendous catch just inside the corner pylon with the defender draped over him. The 29-yard pass from Rangel was one of Schofield’s 10 receptions on the day, and he ended the game with 208 yards to go along with the pair of touchdowns.

With the score 37-35 in the fourth quarter, El Camino was forced to punt the ball away to Mt. SAC setting up a crucial decision for the Mt. SAC coaching staff. The Mounties drive had stalled at the El Camino 35-yard line with 7 minutes left in the game, and instead of attempting what would have been a long 50-yard field goal to go up by two points, the Mounties drew a delay of game penalty on themselves. They then sent out the punt team to try and pin the Warriors back. With that decision, Mt. SAC Coach Bob Jastrab displayed a huge amount of confidence in his defensive unit, who to that point had not given up a touchdown in the half.

“We were only down by two so I had faith in the defense to hold. I mean they’ll either bend or they’ll break, they’ve been doing it all season,” Jastrab said.

Jastrab’s confidence was repaid. The Mountie defense had found themselves pinned back on their own 6-yard line, and the Warriors had a fresh set of downs to try and put the game out of reach with two and a half minutes left. The Mt.SAC defense held strong and forced the Warriors to settle for 3-points, putting the score at 40-35 against El Camino. The goal line defense was impressive by Mt.SAC, as their tenacity held El Camino to give their offense a chance to win the game.

With the stage set for the Mt. SAC offense to do their part and march down the field to win the game, they did not disappoint. During the game-winning two-minute drill that started at the Mt. SAC 25-yard line, Mt. SAC had two big plays that kept the game winning drive alive.

The first involved White, who in a one-on-one situation left a Warrior defender behind with a supreme shimmy shake to pick up 16-yards on a third and 17. The second was Rangel and receiver Sean Bowden connecting for a 23-yard strike. Bowden fought for extra yardage after the catch and leaped to hold the ball over the goal line as he was tackled, but he fell short of the goal line at the ECC 2-yard line.

Running back Malaki Thomspon then punched in the game-winning touchdown on the very next play with a two-yard rush, to give Mt. SAC their first lead of the game with six seconds left. Thompson ran in the Mt. SAC two-point conversion to cement the final score at 43-40.

The Mounties improved their record to 2-0 in conference play with the win. Both sides of the ball for the Mounties had strong performances in the second half.

“I think offense played great today. The offense put 43 points on the board, and they drove the ball the length of the field 80-yards for a touchdown in the last two minutes of the game,” Jastrab said. “So I’m very proud with both sides.”