Movies for Your Mental Health 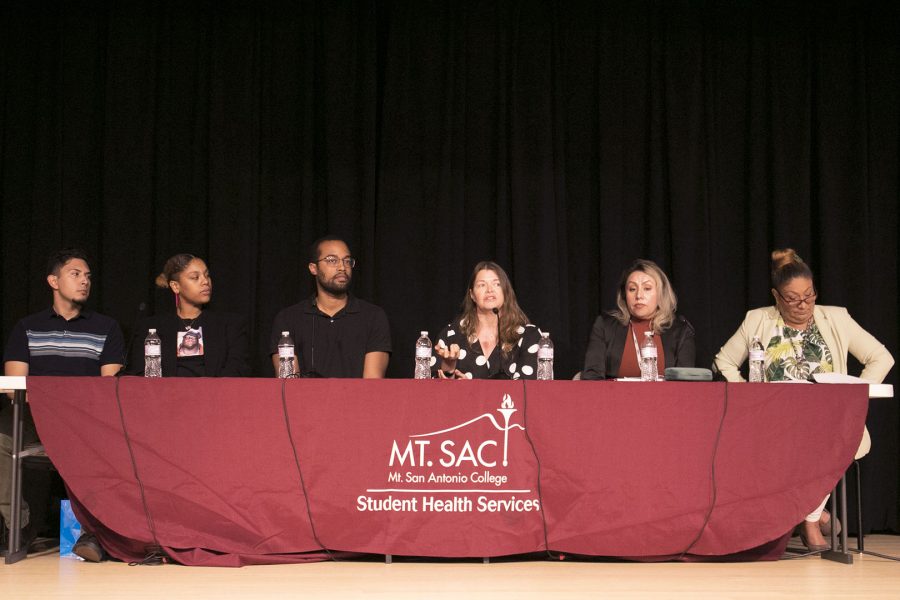 Film is a way to tell a story and at the core of mental illness is a story waiting to be told. “Movies for Mental Health” is where film and mental health meet to encourage dialogue and reduce stigmas surrounding the illnesses that plague our society. Mt. SAC’s Student Health department hosted a workshop on Nov. 6, which was facilitated by Art With Impact, a non-profit organization in the U.S. and Canada.

Art With Impact AWI is an organization that uses art, film, and digital media to create candid discussions and shed light on mental health issues. According to the organization’s website, “Art With Impact promotes mental wellness by creating space for young people to learn and connect.” AWI hosts a monthly short film competition in which filmmakers can submit films that are five minutes or less.

The films explore topics related to mental health issues, and yearly grants are given to a winning filmmaker through the Voices With Impact program. The organization facilitates workshops at colleges, non-profit organizations, churches and books and film clubs. Each workshop contains short film screenings surrounding mental health along with audience analysis and a panel discussion. Additionally, resource awareness is provided to participants to understand how to address their specific needs.

Katie Pelaez, Health Educator with the Student Health Department, is the lead coordinator for organizing the event. “This is a safe space for them [students] to have a conversation about a topic that is sometimes considered taboo, but we are trying to open the ways of conversation for students … to let them know they are supported by our department specifically, but also the campus as a whole,” Paelez said.

AWI facilitator, Seth Pickens, lead the workshop by generating conversation about the various stigmas surrounding mental health and its depiction in film and television. Pickens polled the audience on several themes, such as how different cultures handle and relate to the topic of mental illness. Audience participants spokes from their particular backgrounds – commonly of Hispanic and Black heritage – and how these discussions are virtually non-existent in their communities.

Pickens asked the crowd to provide examples of movies and television shows that involve mental health topics, along with asking the group for adjectives of how characters are portrayed within the media. The audience answered with words such as “different,” “unstable,” “needy,” “weak,” and “lost,” – to name a few. The conversation supported the idea of how mental health stigmas have received a bad rap and perpetuate negative impressions of the people that suffer from them.

The audience feedback was engaging, supportive, and open. Members shared insights and struggles and could see how people from different backgrounds can relate to a common issue. Afterward, three short films ranging between 3-5 minutes in length, were screened during the workshop and audiences members provided feedback on their thoughts and feelings. The film subjects were picked based on topics that are considered relevant to Mt. SAC’s student body.

The first film showcased entitled “Anosognosia” deals with the symptom of the same name – in which a person is unable to understand and realize the existence of their mental illness. The short film follows a day in the life of a young man who experiences different degrees of awareness regarding his mental illness. The allegory shows in the form of the protagonist attempting to go through daily activities while locked between Chinese finger traps.

One audience member reviewed the short film by saying, “I thought it was a good visual representation on how something like a problem can handicap you throughout your daily life and can make things harder.”

The second film entitled, “Not Just a Phase,” deals with the topic of depression, which is most commonly prevalent among young individuals. The documentary-style movie tells the story of a young woman living with depression and her journey to break the stigma that depression is just a phase.

To watch “Not Just a Phase” check out this link to the Art with Impact website.

After the film screening, the audience – which was made up of different backgrounds and nationalities – spoke from their own experiences. The general point of view is that mental illness is considered to be “choice” and something to be ashamed of.

One audience member recalls telling his mother he was depressed and feeling rejected by her response.

“She asked me, ‘What do you have to be depressed about?’ It was at that moment when I really felt alone, more than ever before. We were taught – as a Mexican household – that family values are everything. But when you don’t have your family, you don’t have anything. The lack of knowledge my parents and my culture had … really held me back mentally,” he said.

Student Panelist Danielle DeVaughn, 26, commented on her experience with mental health. “I’m Black, and I’m Mexican, and I feel like within communities of color – it’s [considered] a white thing,” DeVaughn said. “I was that person who was in denial for a really long time.”

The last portion of the workshop included a group of speakers and experts who shared their stories and experiences. The panel consisted of two Mt. SAC students who volunteered to share their own experiences, outside resources from East San Gabriel Valley Mental Health Clinic, who provided information on county resources and representatives from the Student Health Department.

At the end of the workshop, students were able to speak to Pickens and the other panelists to discuss their experiences and inquire about additional resources.

DeVaughn considers the workshop as a positive experience and looks forward to future events. “It’s really great, I think we should have these monthly and annually, as often as we can and fill all these seats,” she said. Televise it – because the world needs to heal – we need this, and we need each other.”