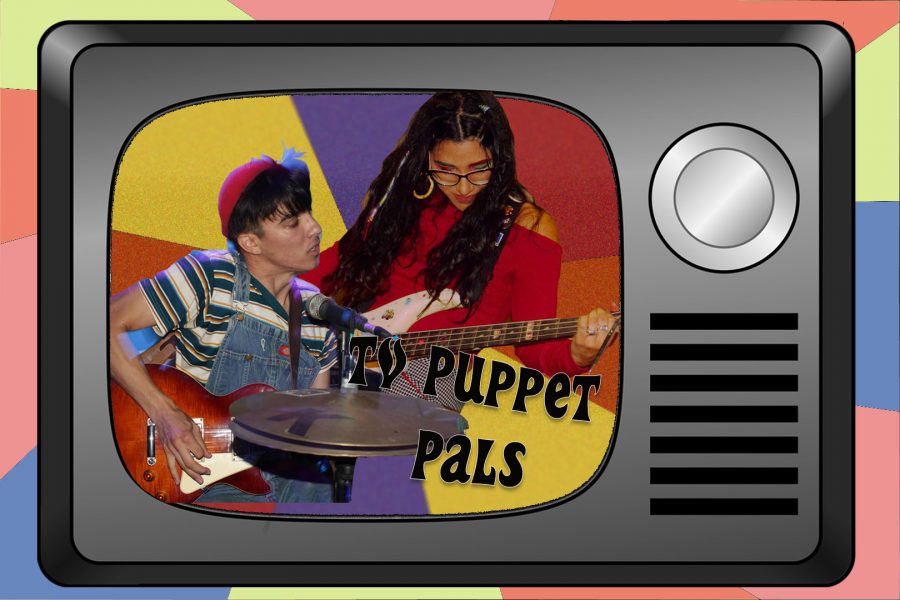 Behind the bleak monotony of suburban life, there is a gem in the Inland Empire’s underground music scene, a community where self-expression is celebrated and artistic minds collaborate. At a backyard show, the sweet sounds of twangy lo-fi surf guitar can change to death-core drums at a moment’s notice. Nevertheless, the crowd goes wild.

For Jules and Steven Garcia, this environment is second nature. The brother and sister duo make up the Chino-based indie band TV Puppet Pals, pulling their name from the show-within-a-show aspect of cartoons like “Dexter’s Laboratory” and “The Powerpuff Girls.” TV Puppet Pals can be found performing at gigs from backyard shows to mini festivals throughout the Inland Empire, making a name for themselves among the local music circuit.

Before the duo formed, Jules and Steven frequented local backyard shows, supporting artists within the community before finding their own voice.

“The vibe at shows is always friendly. Everyone is just trying to have a good time and enjoy music,” Steven said about the positive energy within the scene. Because the close-knit independent music scene makes up just a small pocket of the IE, local talent support each others’ artistic endeavors rather than treat the platform as competition.

TV Puppet Pals found its roots in 2014 when Steven taught Jules how to play baselines for the songs he wrote. Steven said in an interview with Background Check that he began writing songs at 17, though both he and Jules had musical backgrounds as members of their high school marching band. After a circular process of writing new music and practicing, TV Puppet Pals finally took form with Steven on guitar and Jules on bass.

As Jules puts it, “We eventually thought ‘We’re kind of okay actually!’ so we decided to try and get a gig.”

Though it can take a while for a band to adopt its sound, TV Puppet Pals’ new-wave inspired instrumentation serves as a natural pairing to Steven’s vocal style, reminiscent of The Talking Heads’ David Byrne. He describes their sound as “fun, wacky, and energetic,” and influenced by punk.

Soon enough, the band booked their first performance at Chino’s now-defunct Legacy Room. The Legacy Room opened in 2015 as an intimate venue for local bands to showcase their talent, and closed its doors in February of this year when its owners moved out of state. For local artists, booking The Legacy Room was somewhat of a rite of passage that allowed smaller bands to get a feel for a more professional setting beyond backyard shows.

TV Puppet Pals worked their way through the scene, playing their second gig at a backyard show thrown by their friends of the Pomona-based punk band Hexed. While they continue to play at smaller house shows, the duo also is booking bars and restaurants, such as The Press in Claremont, and has even performed on the Fox Theatre Pomona rooftop alongside fellow IE bands like Dead Radio and The Extrangers.

Over the years, TV Puppet Pals has cultivated a following within the SoCal music scene; one of their biggest fans is Diana Torres, 19, an IE native who happens to call Jules her best friend. Torres and Jules met at a backyard show four years ago and Torres has since become a devoted supporter of the band. After years of attending shows and befriending seasoned musicians from up-and-coming IE bands, Torres, who plays guitar and bass, is even thinking about forming a band herself.

Though it might seem daunting to find your space within the community, Torres assures that backyard show culture is welcoming and all about authenticity.

Her advice for anyone who wants to find their niche within the local scene is to “just go to a show, put yourself out there, and try not to be shy! Talk to people because sometimes you can find some really sick people.”

In a case of true best friend telepathy, Jules echoed Torres’ words when coming up with her own words of wisdom for newcomers to the indie circuit: “Talk to people and other artists. They will always help and support you. I feel like people in the music scene are always open to meeting and giving people opportunities to do their passion.”

This network of support is not just limited to music, either. One of the most unique things about the IE’s underground scene is that it celebrates all forms of art, allowing local creatives to intwine their mediums and collaborate on projects together. The IE scene boasts a rich slew of photographers, illustrators, and filmmakers that document shows, create promotional posters, and host art galleries in areas such as downtown Pomona as well as Bridgetown DIY in La Puente.

Steven said, “I honestly feel like there’s a huge variety of art created…The support [from everyone] encourages everyone to continue to create and be themselves and to express themselves! It’s like an awesome community where we can all just create freely!” Aside from music, Steven and Jules are both fine artists who paint and draw in their free time.

Despite their natural talent in the fine arts, TV Puppet Pals has remained one of Steven’s and Jules’ main focuses. With their feel-good punk-y hooks and flamboyant style bringing new life to new wave, TV Puppet Pals are due for their big break. In the spirit of IE-based bands like Beach Bums and Pity Party Girls Club that have blown out of the local scene and have used their strong base of community support as a springing board, TV Puppet Pals has the talent, drive, and charisma to do all that and more.

TV Puppet Pals is slated to release new music soon, and have a message for fans reading: “Our recording process is always so long because we are perfectionists. But we’ve been neglecting everyone for so long. Sorry about that homies! We promise it’ll be soon!”

You can keep up with their musical journey by following them on social media.