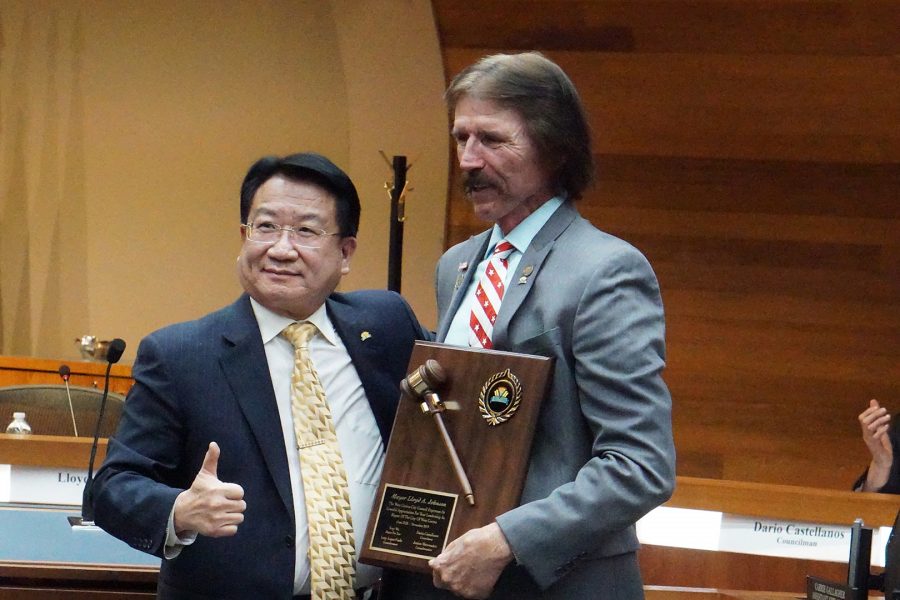 West Covina City Hall was filled with laughs as the city made way for its next set of firsts by confirming their first immigrant mayor, Tony Wu, and their first Filipina mayor pro tem, Letty Lopez-Viado, on Nov. 19.

After a ceremonial presentation of colors by the color guard of Boy Scouts Troop 433, the flag salute by outgoing mayor Lloyd Johnson, the performance of the national anthem by the West Covina High School Choir and other presentations, residents had a chance to leave some comments for the council.

“Mayor Johnson, Lloyd, I’ve known you a long time, probably going on 25 years, and I’m here tonight to tell you I’m proud of you,” planning commissioner Herb Redholtz said. “I’m proud of you. You have risen to the occasion.”

Redholtz was not only complementary to the council, he also made some jokes at the council’s expense.

Redholtz also joked about Johnson’s oratory performances and said that if people in the chambers wanted to hear excellent prose, they would find it in Vin Scully and not Johnson after commending Johnson further for his service to the city.

“You represented this city as the mayor for the past 18 months with dignity and honor,” Redholtz added. “You’ve been to every event, you’ve been the face and the voice of the city at all of these functions, and you’ve served us proud.”

“In closing, I’d just like to say to Lloyd, thank you, you’ve done a great job. You should be very proud of yourself, you’ve led this city with dignity, grace and passion,” Rozatti said. “I’m proud of you. I’m proud to call you my friend, and I wish you all the best.”

After Johnson’s last act as mayor to approve the consent calendar unanimously, with item 6 pulled by the city manager and a “no” vote by Wu on item 3, the council voted to confirm the appointment of Wu to mayor and Lopez to mayor pro tem.

After confirmation, Johnson asked to say a few words before the formal recognitions and joked that he would keep it brief because Wu would take up the rest of the time.

“I would like to say thank you to my wife,” Johnson said. “She has put up with me for the last 18 months above and beyond. Without her support I don’t know if I could do this.”

Wu and Johnson then walked in front of the dais to receive recognitions and say a few words about the transition of the mayoral role.

“I want to do this so I can talk to my buddy. Lloyd Johnson is a fine mayor,” Wu said. “[The] year and a half we worked together, we were like husband and wife.”

Amid laughter, Wu clarified Johnson was “another” wife and that despite disagreements and different ideologies, they still remain close friends.

Johnson agreed, and the pair posed with several other elected officials as they were recognized for their service to the city.