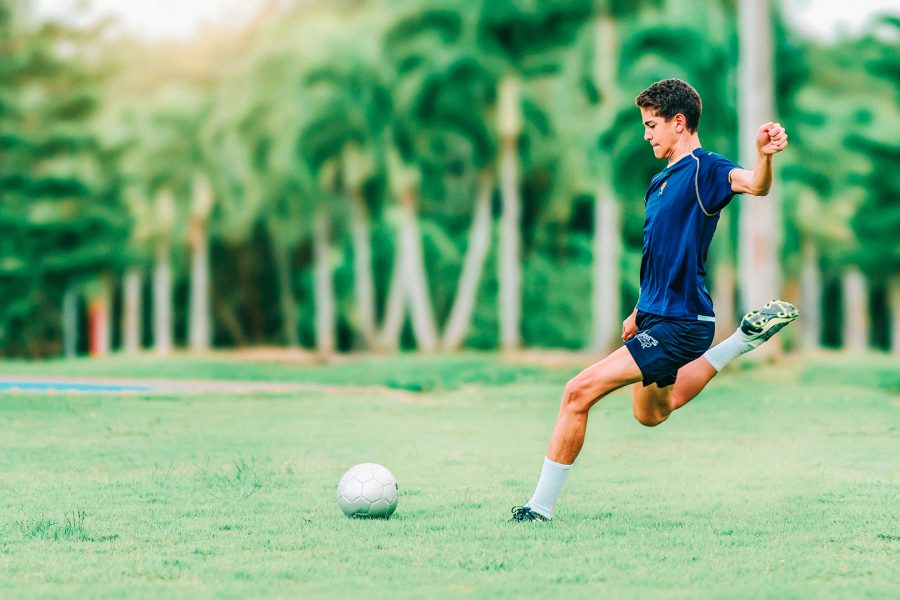 A soccer player gets ready to kick a soccer ball on the field. Photo by Kobby Mendez/Unsplash

Participation in high school athletics is declining nationally at a rate that has not been seen in decades. The number of high school athletes dropped significantly for the first time in 30 years. The National Federation of State High School Associations, or the NFHS, conducted a survey that shows as of the 2018-2019 school year, there is a total of 7,937,491 student athletes. That number is down 43,395 student athletes from the 2017-2018 school year, which had 7,980,886 athletes.

The decrease in high school football is due largely to the recent safety concerns surrounding the sport. Parents are worried about the long term effects the sport can have on their children, along with the possibility of having to deal with brain injuries and concussions.

Mike Madrigal, who has a son that plays wide receiver at Ontario High School, said, “You can really get hurt, everyone is going full speed in a game so the risk of injury is high.” According to a survey conducted by the New York Times, most parents forbid their children from playing football.

The two major contributors to the decline in participation are 11-player football, along with basketball. Football has lost 30,829 student athletes for the 2018-2019 year, which is the biggest decline in the sport since the 1999-2000 school year. Basketball had a combined 23,944 decline in participation between boy and girl athletes (13,340 girls and 10,604 boys). The biggest decline was from girls basketball in the state of Texas, who in the past two years has declined by 25,000 female athletes.

Participation in high school sports has also dropped due to the decrease in dual sport athletes. More student athletes are focusing on one single sport year round, limiting their ability to commit to other sports. Richard Rico, a former Mt. SAC student athlete who now coaches track and field and cross country at Ontario High School, has noticed the decline in dual sport athletes firsthand at his school.

Rico added, “Reasons why participation has dropped will fall on certain sports where they have elite club teams that ask their athletes to either not participate in high school sports or restrict their participation in their one specific sport.”

Some examples of these sports include seven on seven football teams, travel basketball teams and club soccer teams. Football and basketball are included in this list, which happen to be the two sports that top the list of declining participants in high school athletics.

“Certain sports clubs would rather have athletes that specialize instead of being dual sport athletes,” Rico said.

Many students now are becoming athletes that focus on one single sport because of the influence of professional athlete contracts. For example, Bryce Harper, an outfielding slugger from the Philadelphia Phillies recently signed a contract worth $330 million over 13 years. These types of contracts are becoming more and more common in professional sports, and it could very well be the reason that these athletes are spending so much time and money into chasing a dream contract. It causes them to sacrifice other sports that they enjoy because they want to play on a club or travel ball team year round, and this contributes to the decline of participation in high school sports.

Some kids are also being pressured to play at a high level as soon as they get into high school by both their parents and often their school. This often makes the children feel pressured to exceed expectations and become burnt out, according to the National Alliance for Sports.

According to the University of Michigan C.S. Mott Children’s Hospital, 61% of families pay for their children to participate in sports. The average family in America pays about $700 a year, while the middle and upper class families could spend up to $35,000 annually on their children, according to data collected by the Rand Corporation. This is another factor that is contributing to the drop of participation of high school sports. Most families simply cannot afford to put their children into high school athletics.

The decline in high school sports has been predicted for some time now. The NFHS has predicted the decline from surveys taken over the past few years, and they knew that this time would be coming sooner, rather than later.