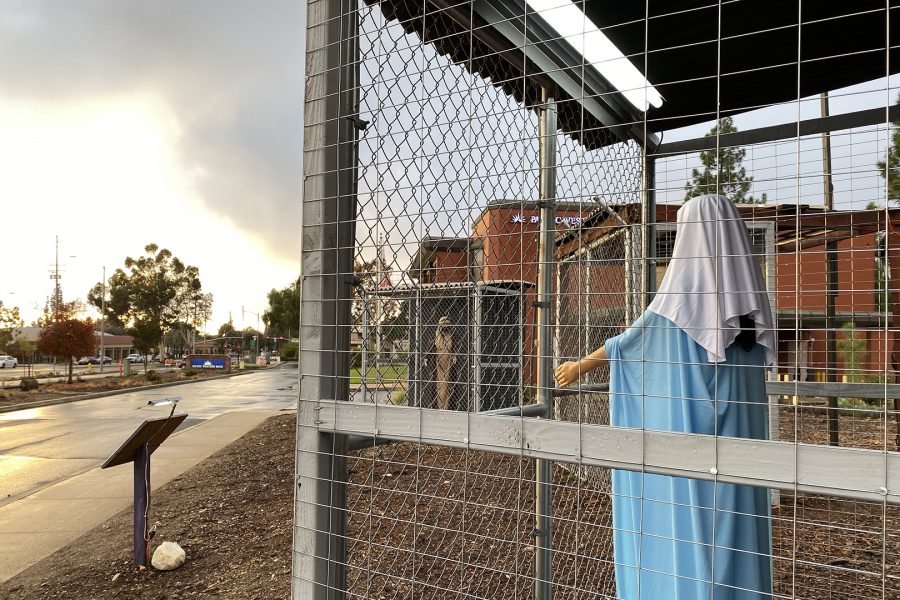 The Virgin Mary sits in a cage separated from Joseph and Jesus at the Claremont United Methodist Church on Dec. 8, 2019. Photo credit: Lily Lopez/SAC.Media.

The Claremont United Methodist Church, located at 211 W. Foothill Blvd., debuted their nativity scene and made a strong political statement. The nativity scene, which includes Jesus, Mary and Joseph, displays each individual separated from one another inside a chain-link fence holding area.

The church has set up this display in reference to the situation at the border, where approximately 5,500 migrant children have been separated from their parents by the Trump Administration, according to Time Magazine. Images of children in cages circled throughout the internet, which led to widespread criticism of the administration’s immigration policies and the ending of the practice of separating children from their families in June 2018.

This Christmas, the church made the Holy Family take the place of the thousands of nameless families separated at the border.

In a Facebook post shared on Dec. 7, Senior Minister at Claremont United Methodist Church Karen Clark Ristine shared the photo of the nativity scene along with a message for the community:

“In a time in our country when refugee families seek asylum at our borders and are unwillingly separated from one another, we consider the most well known refugee family in the world. Jesus, Mary and Joseph, the Holy family.“

Inside the church, members will be able to see the same family reunited.

Since 2007, the church has displayed a number of poignant and socially conscious displays during the holiday season.

The church has displayed Mary, the mother of God, as a homeless woman at a bus stop with the baby Jesus in tow in 2014, and has depicted Trayvon Benjamin Martin, who was fatally shot by George Zimmerman, in 2013.

However, the church’s nativity committee did scrap the idea of a Sandy Hook-themed scene, a provocative display on gun violence, in 2015.

Aside from advocacy, the church’s website also includes information about past work with asylum seekers at the U.S. border where $10,000 was raised for Justice For Our Neighbors, an organization that provides legal counsel for detained and separated children.