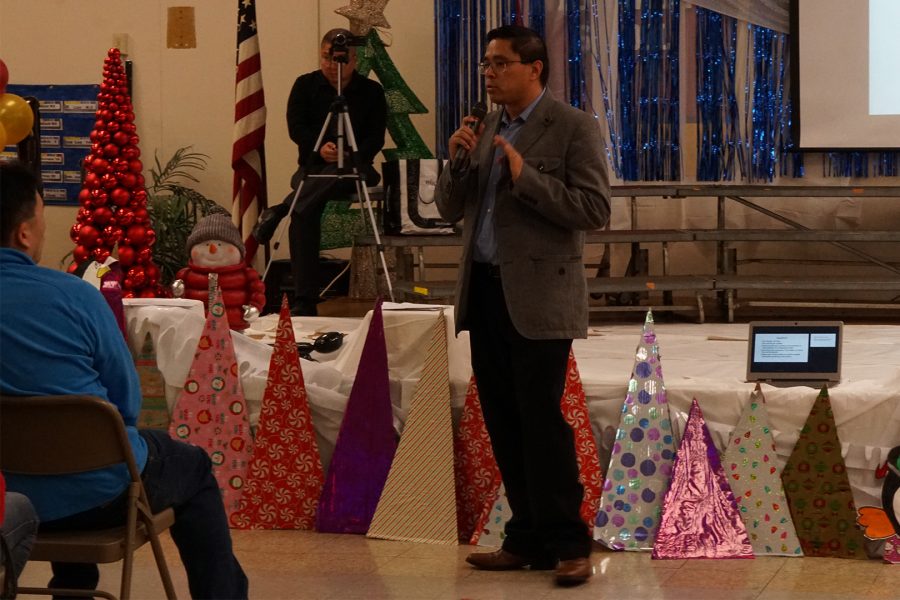 For the fourth time, residents joined together at Wedgeworth Elementary School in Hacienda Heights on Dec. 10 and Dec. 14 to express their concerns with the Environmental Impact Reports, or EIR, provided to the community.

Clerk Gino Kwok attended both meetings, but stepped out of the first one after around an hour and stepped out of the second one after about a half hour. Kwok had told others in attendance at the second meeting that he would have to leave early because he wanted to see his daughter perform. Kwok ended up spending his time with Josh Rosen, a freelance reporter for the San Gabriel Valley Tribune, in order to go over some things that were said at the Dec. 12 board meeting about Rosen’s reporting on the La Puente High School power outage, which had since became an additional item on the board’s agenda.

Kwok, who was among the board members criticized for not being in attendance at one of the previous Wedgeworth town halls, had said that he spent most of the town hall he did attend speaking with other individuals. While that could not be verified for the town hall, it was verified for this meeting by Rosen that Kwok was speaking with someone else instead of remaining at the meeting.

Board member Jeffrey De La Torre attended the second meeting around the time Kwok stepped out with Rosen. He said he saw the first meeting on social media when the topic came up at the Dec. 12 board meeting. Previously, De La Torre had attended the town halls in full.

The rest, board member Martin Medrano, vice president Joseph Chang and president Anthony Duarte, have not shown up to any of the four community meetings about Wedgeworth.

After both meetings, however, residents have left dissatisfied for various reasons. Those concerned about the little league fields will find that these plans appear to be designed to displace their fields, and if the project moves ahead as scheduled, those concerned with the progress of making the property a permanent school will still have a two year wait before the new school would be ready to open its doors.

The current possible solutions to remedy those concerns, as discussed in the meeting, is to take advantage of Supervisor Janice Hahn’s offer to provide $1.5 million to help relocate the fields to a nearby park.

“If the district chooses to build two new Little League fields on the Kwis Elementary campus, I will provide up to $1.5 million in funding to construct one of the fields,” field representative Lauren Yokomizo read out to the district on behalf on Hahn at the board meeting.

Some residents at this meeting, and at the prior Dec. 12 board meeting, referred to that figure as a “drop in the bucket” for the full cost of relocating the fields. Others cite issues with having to potentially alter a park, and other fields of various conditions, to get the space safe and ready to handle the league’s children.

The decision to relocate the fields may also leave out league officials from the planning process, as Hahn’s communications director Liz Odendahl told the Tribune that the league officials “should be included” in the process, but did not state that they would be. Additionally, the league’s communications coordinator Christine Salazar has said that the league has never received an eviction notice or any formal declaration that their playing fields may or will be moved.

Hacienda Heights Highlander’s Little League President Manny Perez put the figure in the ballpark of around $5 million minimum to come close to the amenities they currently offer beside the school of all portables.

At this meeting and past meetings, the league’s nonprofit status has been attacked for being “out of compliance.” While Certain community members have advocated for the district attorney to investigate the league, Perez has said that there have been some issues in the transitioning of boards in the past. He also said that past boards may have forgotten to file paperwork, but that things are in the clear now. He added that he has since utilized a specialized CPA that has gotten the league up to date with their taxes and that they have been in the lengthy process of paperwork and are just waiting on it to be processed.

While the EIR largely does not plan for the fields, several on both sides of the issue held concerns about traffic. Some residents said that relocating Highlander baseball would alleviate traffic concerns; others say that their math does not add up with the amount of traffic that would be added with the new school.

Either way, several residents expressed major concerns with the study not focusing on certain intersections around the school and only focusing on signalized intersections, like Azusa Avenue and Pepper Brook Way, that are rough for traffic flow on a good day.

Traffic is but one of many reasons the project has several mixed reviews from different sides of the community.

Depending on who one asks, this school was always an overflow school of portables, or it was a school destined to become a permanent one from the day it was conceived.

Wherever one lands on the project, it’s important to remember that their comments on the EIR will still be received by email at [email protected] until Jan. 21 at 5 p.m.

After all comments are received from the public and other agencies, a formal response will be given to the majority of concerns, and the final EIR will be presented before the board for a vote. Progress on the project may only begin after the board votes to approve the EIR.