After hearing tense comments and a fight almost break out over art, the city council voted to paint over the unauthorized park mural 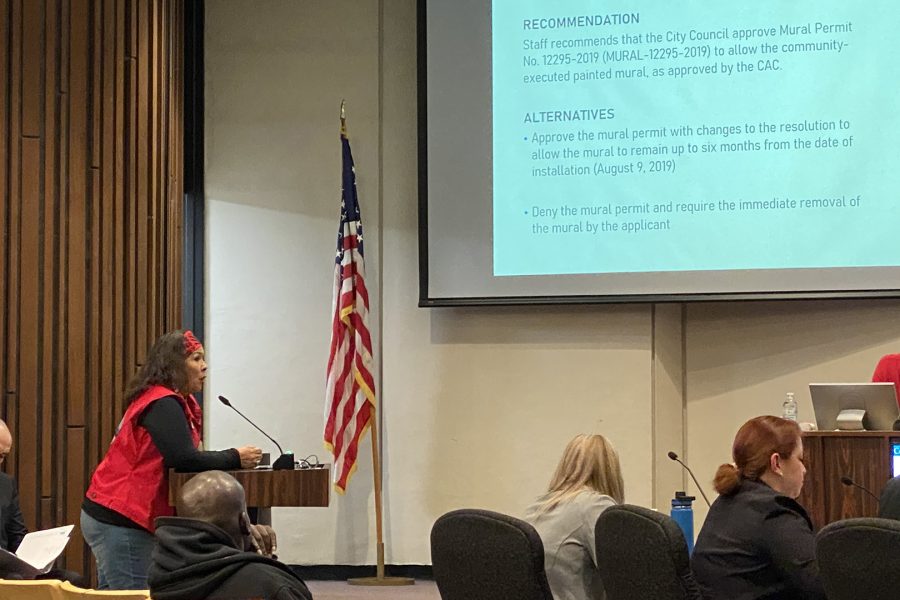 A fight nearly broke out between residents outside of Pomona’s council chambers on Jan. 6 after community members voiced concerns over an unauthorized mural that was painted on the stage of the Tony Cerda Park last August. The council voted to remove the mural, which depicted Native American and Aztec symbols, amid tensions.

The mural sparked controversy among community members who felt the mural was culturally insensitive and did not in any way represent their tribal history, but Pomona’s Cultural Arts Commission had previously voted to issue a permit and allow the mural to remain on display until August 2020 during the Dec. 9 council meeting. Community members opposed to the mural have spoken during meetings to ask for the mural’s removal following this decision.

Members of the American Indian Movement filled the city hall chamber as they sat together in solidarity, wearing bright red bandanas and shirts with AIM patches sewn on the back, as members shared their disapproval of the mural.

Deedee Ibarra, member of AIM, was among a handful of members present at the meeting who was in opposition to the mural and demanded it be taken down immediately. She expressed the frustration she experienced with the Cultural Arts Commission while attempting to submit paperwork in order to request change on the mural. During this process, Ibarra said that they were not listened to or given a chance to ask questions, and she added that they were treated rudely by city staff.

“I have never been so humiliated like I was here in my own hometown,” Ibarra said. “I felt so small.”

As a long time resident of the city, Ibarra expressed her love for Pomona but admitted feeling hurt and disgusted by the way they were treated.

“Please take that mural down now because it’s caused nothing but division within the city,” Ibarra added.

Sam Escobar, a citizen of the Muscogee Creek Nation in Oklahoma and member of AIM, also stood in front of the council in opposition of the mural. Escobar believes the symbols represented in the mural have no significant value.

“I’m a firm believer in that fact that when you put things up that don’t belong, that one misrepresenting the true cultural identity of a tribe and historical value of that tribe, that is in effect cultural genocide and its erasure,” Escobar said. “If you are going to have a mural up, put something up that is meaningful to the people of this land.”

While most of the speakers urged the council to remove the controversial display, some asked the council to allow the mural to remain until the summer is over in order to support the youth who joined in creating the mural. The mural was originally created because community members have been participating in projects that aim to improve local parks throughout the city, and some residents feel that keeping the mural will give the volunteers hope and acknowledgement for their work.

“I just hope there is a future for those kids that put it up and maybe they can be involved in the next one, because they deserve a chance to also be involved in that for the people,” community organizer Connie Almaguer said.

The room became tense as each speaker spoke and expressed their opinion on the mural. Two men with opposing views on the matter then started to argue and threaten each other as they exited the chambers. Chief Mike Olivieri and Deputy Chief Mike Ellis rushed over to the men in order to prevent the two from getting physical.

“We as a community have so many challenges, the last thing we need to be doing is fighting over a mural,” Sandoval said.

Coming from a Chicano and anthropologist background, council member Rubio Gonzalez said he personally liked the mural, and would like to see more art and murals displayed throughout the city, but acknowledged that unauthorized art is technically graffiti, which is a punishable crime.

“It’s not really a good example to set for children,” Gonzalez said. “So I support the mayor’s motion to remove this mural immediately, so that we can move on from this issue.”

Council members Steve Lustro and Elizabeth Ontiveros-Cole joined Gonzales and Sandoval by voting to approve the removal of the mural, but due to a potential conflict of interest and divided constituents, council member Victor Preciado abstained from the discussion and vote. Nora Garcia and Robert Torres were not present at the meeting, making the vote 4-0-1.

As of Jan. 7, the mural has been painted over.