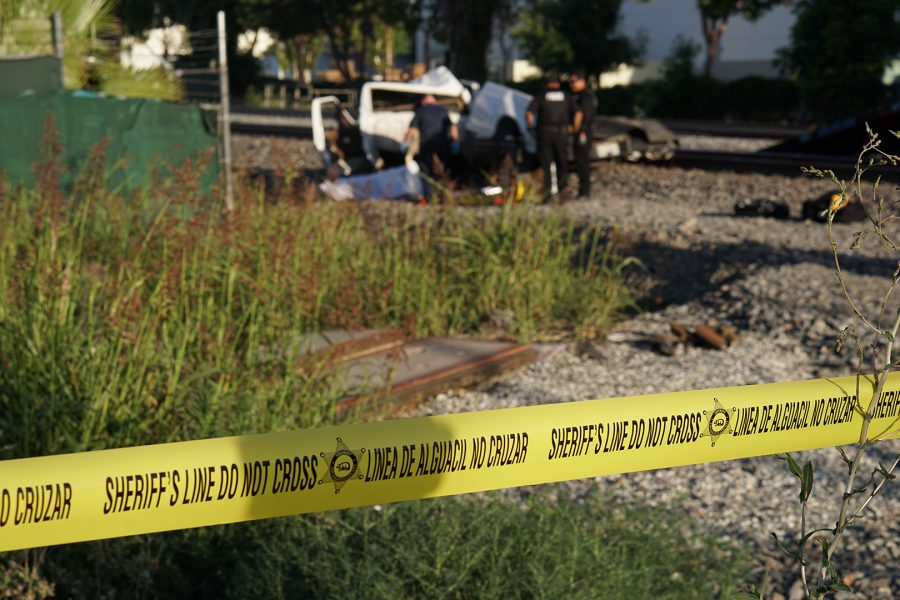 Police tape surrounds the accident scene as the coroner, police and towing crew work in the background on May 9 in Hacienda Heights. Photo credit: Joshua Sanchez/SAC.Media.

Two fences are still down after a southbound white pickup truck caught the wrong end of a eastbound freight train in Hacienda Heights.

California Highway Patrol officials and logs describe the crash as happening after 12:30 p.m. on June 9 near the cross street of Salt Lake Avenue. The driver of the truck knocked down two fences at the Turnbull Canyon Road and Salt Lake Avenue intersection before colliding with a Union Pacific train.

CHP officer Aaron Stubblefield, who came out on call from Santa Fe Springs, said that the crash took place on Union Pacific property and would be handled by Union Pacific Police Department.

The impact sent the vehicle to the left northern side of the tracks and required the eastbound train to completely stop for five hours. In this time, there were cones blocking off both sides of the street from Clark Avenue until Salt Lake Avenue.

The train left the scene at 5:27 p.m. and roughly 50 minutes later, the tow trucks began to make progress on moving the pickup truck.

The victim of the crash who was pronounced dead at the scene, was a male and his body was taken away by one of the Los Angeles County coroners at 6:50 p.m. No identification was found at the scene.

A half hour later, the pieces of truck were fully secured on the tow truck and the road was cleared around 8 p.m.

For the entirety of the moving of the truck and body, about 25 to 35 nearby drivers stopped at various times to check out what was happening.

La Puente resident, Cesar Martinez, 44, was driving after dropping off his mother.

Martinez said he uses Turnbull Canyon Road frequently and said he would never imagine such a crash happening here.

He called the community a small town and said that the area’s jurisdiction was interesting as it falls under the border of City of Industry, Los Angeles County, and Union Pacific’s boundaries.

KTLA’s Brian Day originally broke the story and other details have been added from on scene reporting.

They have mostly moved the truck and body six hours after the crash. pic.twitter.com/AsgTscRi4R

They have successfully towed the truck and have moved from left of the track crossing to the center, and are now on the right side near the impact. pic.twitter.com/6FZXwy5JaM

On June 19, the victim’s son, who goes by the professional name Alessandro Você, contacted SAC.Media. Você said that the name provided in the Tribune’s coverage is accurate and that while working in the area, he asked business owners if they had footage of the crash.

He provided this information regarding the crash:

His father, Ricardo Camara, 57, did not approach going southbound on Turnbull Canyon Road.

Instead, he had parked in the parking lot across the street from the tracks and was headed west onto Salt Lake Avenue at a speed of about 30 mph.

At this point, Você believes his father lost control of the vehicle and said a possible heart attack may have led to his foot getting stuck on the gas.

After making contact with the fences, the truck curves and goes right up before spending what Você describes as five seconds on the track before the truck is struck by the eastbound Union Pacific train.

The truck was struck on the passenger side, and his head hit the rolled down window with an impact so hard his heart shut off. Due to this, there was less blood on scene than to be expected.

The surveillance video, lack of clear skid marks and the way the metal was bent have led to this description of events from Você.

His father has been working in the area washing trucks and had previously suffered from a brain tumor, but it is unknown at this time if Camara’s crash was related to past medical issues.

Due to Você’s account the following was changed in the article:

The driver of the truck was headed southbound when they veered right off of Turnbull Canyon Road and knocked down two fences before colliding with a Union Pacific train.

Although the CHP logs and preliminary information at the scene made it appear as though the truck was headed southbound, that language has been removed from the article.