Showing What is Rightfully Hers 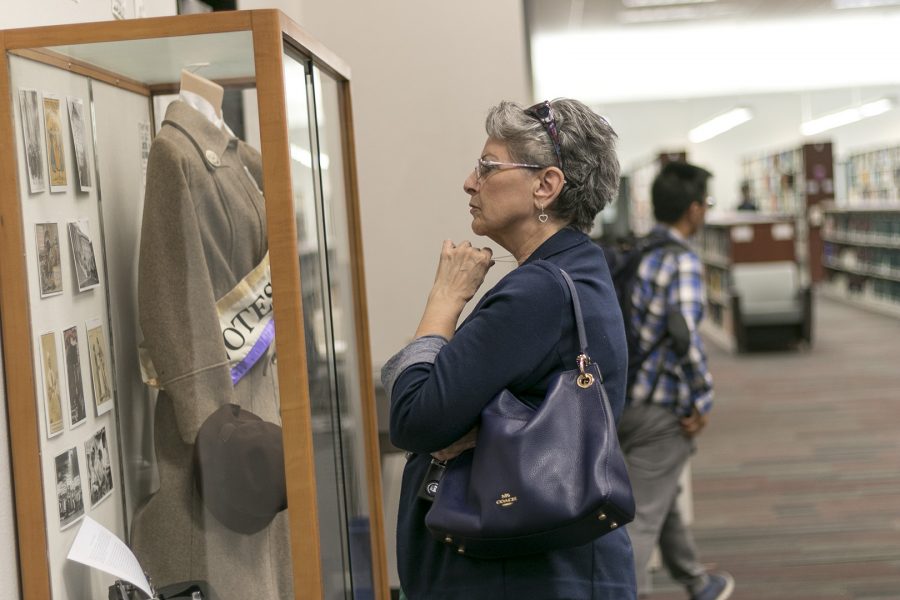 As students typically enter the library, they are immediately struck by the image of countless books sitting on shelves. Upon walking further inside, they are met with something not usually there: a large exhibit of purple and gold embellishments. After stepping in further, a display pulls them in; it is decorated with photos of women of the past, fighting for their right to vote. What these students are gathered around is the Rightfully Hers exhibit.

Rightfully Hers is celebrating the 100th anniversary of the ratification of the 19th amendment through an exhibit displayed at the National Archives Museum. Mt. SAC’s library is currently one of multiple educational institutions to have been selected to have this exhibit on display after librarian Suzanne Maguire applied.

Prior to the ratification of the 19th amendment, many resisted the concept of allowing women the right to vote because they feared that women’s role in the family would change and political power would be taken from men. Many advocated and fought for women’s suffrage for over 70 years through different strategies to persuade Congress to approve of the amendment. It was approved by Congress on June 4, 1919 and was ratified on Aug. 18, 1920, when Tennessee became the 36th needed state to approve the amendment.

The main goal of the exhibit is to acknowledge the amount of effort by men and women that went into gaining the right to vote, regardless of sex, and that there are still issues that exist today.

Maguire said that the intention of having the exhibit was “to bring it to present day where there’s still a lot of challenges to voting, and getting people to think about this as an ongoing struggle instead of something that has just kind of happened a long time ago.”

Maguire wanted to make the exhibit more interactive and added some elements of her own. An easel where students can respond to the question “What challenges to voting exist today?” has brought in a variety of responses and started discussion. Some of the responses included:

“Gerrymandering exists across all states and serves to steal the voices of voters.”

“Two party system limits discourse and creates incentives for politicians to stick with the party even when not in best interest for the nation/constituency.”

“Companies and their owners disenfranchise the working class.”

“The feedback we’ve gotten from faculty and students has been great because you never know, you put something out there, and to be able to start that conversation is a good feeling,” Maguire said.

Other interactive elements include a true or false game and a small slideshow, extensions of the library’s collection on the suffrage movement.

“I definitely like creating things that people can interact with and maybe showcasing the resources the library has in maybe a slightly different way than having books on the shelves,” Maguire said.

Members of the community and those on campus who are interested in hosting their own displays in the library are welcome to do so and can apply through the library’s website.

The exhibit will remain on display in the library until March 20.