Studios push back anticipated blockbusters amid the coronavirus outbreak 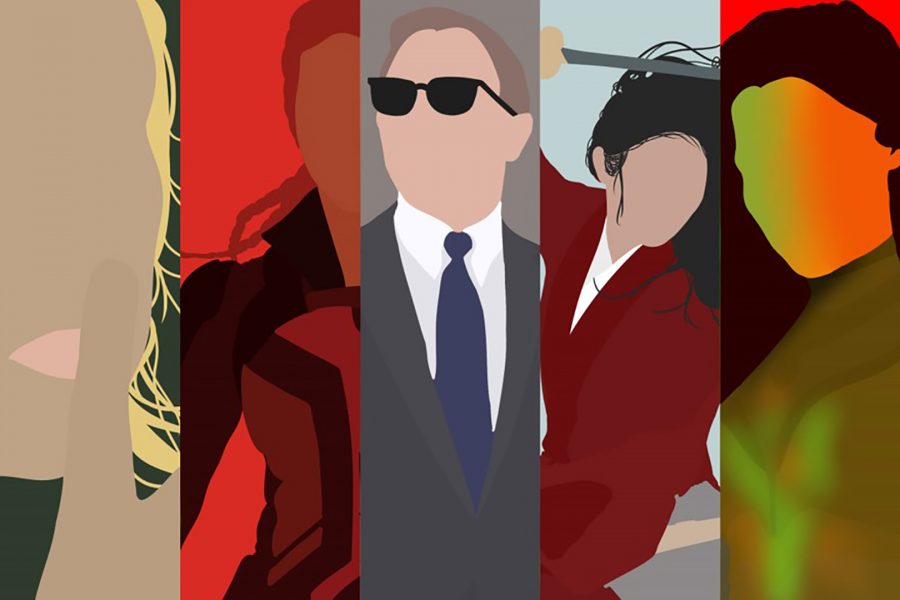 From left to right: “A Quiet Place II,” “Black Widow”, “No Time to Die”, “Mulan,” and “Wonder Woman 1984,” have all been delayed due to the coronavirus outbreak. Photo Illustration: Leni Santos/SAC.Media.

Campus is closed. Non-essential businesses are closed. A third of the world is staying home to “flatten the curve.” Hollywood has halted productions, pushed back release dates and disrupted other entertainment events. Life has changed as we know it, and Hollywood is scrambling.

Mass closures have already taken place throughout the rest of the world, from virus hotspots such as China, Japan, and all of Italy, resulting in billions of dollars in lost revenues.

Major movie theater chains AMC and Regal Cinemas have closed the curtain on their screens. AMC has closed its theaters for a tentative timeframe of six to 12 weeks, and Regal theaters will be closed for an “indefinite” amount of time.

Nonetheless, Americans support such closures, according to a Morning Consult and Hollywood Reporter poll. It states that 38% of Americans agree with shutting down theaters to prevent the spread of the novel virus.

The coronavirus pandemic has spread rapidly, and Hollywood is feeling the effects. For the time being, we will have to wait to see our favorite celebs on the big screen.

Here are the most notable films that have had release dates pushed back and/or film production has paused due to the corona chaos of 2020.

The title is quite apropos, I must say.

When the delay of “No Time to Die” was announced, many were surprised, as this was the first major movie to delay its release, and this kicked off a cascade of movies being postponed or canceled. Producers feared that with the closure of many movie theaters around the world, the box office revenue would take a hit, especially with the international markets. The 25th James Bond installment was initially scheduled for a release on April 10 and has now been pushed to a premiere date of Nov. 25.

The largely anticipated sequel has been delayed to be released sometime this year; however, neither a month nor date has been scheduled. The film’s director, John Krasinski, went to Instagram to break the news. In the statement, he assured fans that the movie would be best released when we “can all see it together.”

Although the $200 million live-action remake already had its Hollywood red carpet premiere on March 9, the story of the Chinese maiden who disguises herself as a male warrior to save her father was set to be released March 27. Critics who have seen the movie praised the CGI effects and fight sequences, and is regarded as the best of the Disney live-action remakes since Cinderella.

Despite the positive response, Disney has postponed the film until further notice and has not scheduled a future release date.

The latest movie from the “Fast & Furious” saga series was originally slated to be released on May 22. However, due to the growing pandemic, the movie has been pushed back a full year to April 2021 in the most drastic move yet. Why a year long postponement? Your guess is as good as mine.

Fans who longingly rooted for Black Widow to receive her own movie were disappointed to hear that the original release date of May 1 has been delayed. Marvel’s female superhero movie does not have an official relaunch date in the pipeline.

However, during an Instagram Q&A, David Harbour of “Stranger Things,” who plays Alexei Shostakov in “Black Widow,” called for the movie to be streamed online.

“My publisher also sent me an email saying Black Widow had been postponed and I think I replied ‘shocker,’” the actor said. “Wouldn’t it be fun if we all could just stream it? But that’s above my pay grade.”

Sorry to be the bearer of bad news, but in relevant TV news, production for the fourth season of “Stranger Things” has come to a halt as well. Just remember, all good things come to those who wait.

The ’80s-themed sequel to the 2017 megablockbuster will be delayed by two months with a scheduled release date of Aug. 14.

Warner Bros. Motion Picture Group chairman Toby Emmerich recently said in a statement, “When we greenlit WW 1984 it was with every intention to be viewed on the big screen and are excited to announce that Warner Bros. Pictures will be bringing the film to theaters on August 14th. We hope the world will be in a safer and healthier place by then.”

That makes you and me both, brother.

This musical drama that explores three days in the New York City Dominican-American neighborhood of Washington Heights was initially slated for an Aug. 6 release date. However, due to the outbreak, Warner Bros. has indefinitely postponed the release until further notice.

Nonetheless, the film’s director Jon M. Chu is not disappointed in the decision. In a recent interview, he explained that he wanted audiences to be able to experience the film in the theater.

“And with it being a musical, if you look back at history, that kind of movie has always brought people together at the worst times to celebrate life. And now we need that even more so,” Chu said.

This Marvel horror film—the first in its kind—has had a rough go since filming began in 2017. “The New Mutants” appears to have been cursed from the start. The “X-Men” spinoff was originally slated for an April 4th release, but has now been postponed for the fourth time, and does not have a definitive premiere date scheduled in the pipeline.

Other films that were in the process of production that have been interrupted/postponed until further notice include:

During this time of uncertainty, Hollywood is taking a huge financial hit and may have to rethink its strategy if the business wants to stay afloat and stop the metaphorical bleeding.

NBCUniversal has already begun to alter their approach. In a monumental move, the mass media conglomerate is breaking tradition by releasing several new movies that will be available to watch at home. The first movie that will simultaneously debut online and in theaters—if theaters are open—is “Trolls World Tour” on April 10. Rental prices are estimated at $19.99 for a 48-hour rental. Yes, nearly $20 to stream the latest Trolls movie! Outrageous!

On a positive note, most filmmakers are at peace with the decision to delay their films because they want the audience to experience it in the movie theaters. I couldn’t agree more; nothing beats watching a movie on the big screen.

Ultimately, the sacrifices we make to keep ourselves and the rest of the human race healthy and strong is most important during this time. In the end, it will all be worth the wait.