Volleyball Coach Fights for Her Job

Coach Ali-Carey Oliver faced the Board of Trustees alongside student athletes, coaches, faculty and family in an emotional plea to remain in her position as head volleyball coach 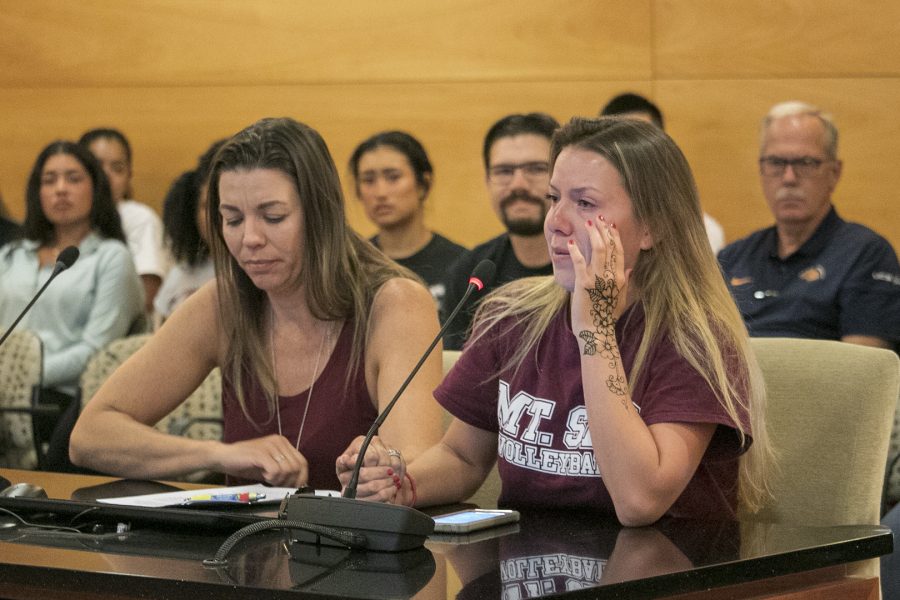 The Mt. SAC Board of Trustees has denied Ali Carey-Oliver’s tenure. According to Carey-Oliver, she will be moving forward with filing a grievance.

“As the one and only female full-time [head] coach, being told that I am the only coach that cannot cuss is something that I need to stand up to,” she said.

Carey-Oliver said that she hopes to bring attention to the gender bias that exists in her profession as a collegiate coach.

The claims against Carey-Oliver are as follows:

Coach Oliver critiques students in front of the team in a manner that creates stress, anxiety and embarrassment for the student and leaves them feeling intimidated.

Coach Oliver has repeatedly expressed insensitive opinions about students, their families and peers.

Coach Oliver’s repeated actions have tarnished students athletic experience and they have expressed a desire to transfer or leave volleyball entirely.”

Director of athletics Joe Jennum responded, “I apologize for the delay and have seen the article. Since this is a personnel matter, we are unable to comment at this time.”

Ali Carey-Oliver, Mt. SAC’s head women’s volleyball coach and kinesiology professor, took a stand in front of the Mt. SAC Board of Trustees during open public comments on Wednesday, Feb. 26 after having her tenure denied by her tenure committee due to alleged complaints from three students that she cursed on the volleyball court. Tenure grants a professor permanent employment at their college and protects them from being fired without cause.

According to Carey-Oliver, she has been placed on paid leave from her position since Oct. 25, 2019 while the school’s administration reviews her tenure.

Carey-Oliver also said that the board changed the meeting agenda and moved up the open public comment section to 4 p.m. This is over two hours earlier than the regularly scheduled time for public comments during the meeting at 6:30 p.m. Without 72 hours prior notice of this agenda change, this violates the Brown Act.

A group of people, from former volleyball players she coached to colleagues and family members, rallied in support for her at the meeting. The statements they gave to the board were enough to fill up over an hour’s worth of public comment.

Joan Sholars, Faculty Association president and mathematics professor, attended the board meeting and spoke on behalf of Carey-Oliver. Sholars said she worries about the inconsistencies and how our women and men’s coaches are treated at Mt. SAC.

“Why do we treat our female athletes like they’re porcelain, and yet our male athletes are ready for the real world?” Sholars said. Carey-Oliver is the only coach Sholars said she has known of to be directed to not “cuss” in front of student-athletes.

Oliver clarified that two of the three students who complained later apologized to her.

According to Sholars, student-athletes brought a complaint about Carey-Oliver to Mt. SAC President William Scroggins about something Sholars called a “mistake.”

“Coach Oliver has expressed her sincere apologies for the misunderstandings that occurred with the students, as it is now, and has never been, appropriate first to have students feel mistreated or demeaned in any way,” Sholars said.

According to Chris Oliver, “the tenure committee, VP [vice president] and president have recommended to deny Ali Carey tenure.” He then said the situation was “disturbing because I’m positive that this board does not have all of the information needed to make a fair informed decision—a decision that has the potential to expose the institution to a legitimate lawsuit.”

SAC.Media has reached out to Joe Jennum and are currently awaiting his reply.

The process of tenure review is as follows: the tenure committee is made up of the professor seeking tenure’s peers and administrators, who first make a recommendation of what actions to take. The review then goes to the vice president of instruction. The vice president of instruction creates their own recommendation for the Board of Trustees, but it is ultimately up to the board for the final decision.

In this case, the Board of Trustees is required to decide by March 15, according to Carey-Oliver from her employment contract.

Carey-Oliver also said that Mt. SAC Human Resources reportedly did not allow her to discuss the situation with the athletes she coached and her colleagues.

Despite HR’s demand, she talked to fellow employees about her ongoing situation.

“I believe California law states that employees are allowed to speak to other employees about their employment situation,” Carey-Oliver said. “And so I have tried to speak to some close colleagues about support.”

According to a California government code, given to SAC.Media by Carey-Oliver, “It is unlawful for a public school employer to do any of the following:

She also recalled having to tell the volleyball players on the last day of practice that she would no longer be able to coach them.

“When I told them [athletes] at our last practice, the majority of them were very distraught; they were crying and hugging me,” Carey-Oliver said. “They were very upset.”

A number of people including colleagues, former athletes and opposing coaches started sending in letters of support for Carey-Oliver to Scroggins’ office, as well as to the California Teachers Association CTA and the union president on campus, Joan Sholars.

“The very first letter of support to come in was from a player that just finished from last year,” Carey-Oliver said. Several other people who Carey-Oliver had coached as student-athletes, some former students, gave statements defending her, providing examples of how she improved their abilities and lives.

One of these students was Elizabeth Thomas, a freshman volleyball player at Mt. SAC. She cited her stage fright as she spoke to the board.

“Being here in front of all of you is one of the hardest things that I can do,” Thomas said as her voice shook. “It’s worth every butterfly in my stomach and every tear that I cry. Ali is one of the sweetest and most genuine coaches I have ever had.”

“I can confirm that these allegations against Ali are misconstrued, dramaticized and just plain false accounts of what really happened,” Partridge said.

Along with her coaching experience, Carey-Oliver also helped the Mt. SAC women’s volleyball team win their first conference championship in her first year as a coach at the college.

Carey-Oliver had spoke to SAC.Media prior to the meeting. She had hoped that by speaking to the board on Wednesday, she would be able to show them the positive things that she brought to Mt. SAC, such as the advances she made in her classroom and department, as well as the successes of the volleyball program and the inaugural beach volleyball program.

Samantha Neely has since been put in Carey-Oliver’s place as the interim head coach.

“I coach within the realms of my profession, and I always have, and I’ve done nothing outside of what’s appropriate as a coach in the coaching world,” Carey-Oliver said. “And I don’t think that my tenure should be denied because of that.”

This is an ongoing story and will be updated as soon as more information becomes available.