Need your fix? Scout your nugget options before leaving your cave 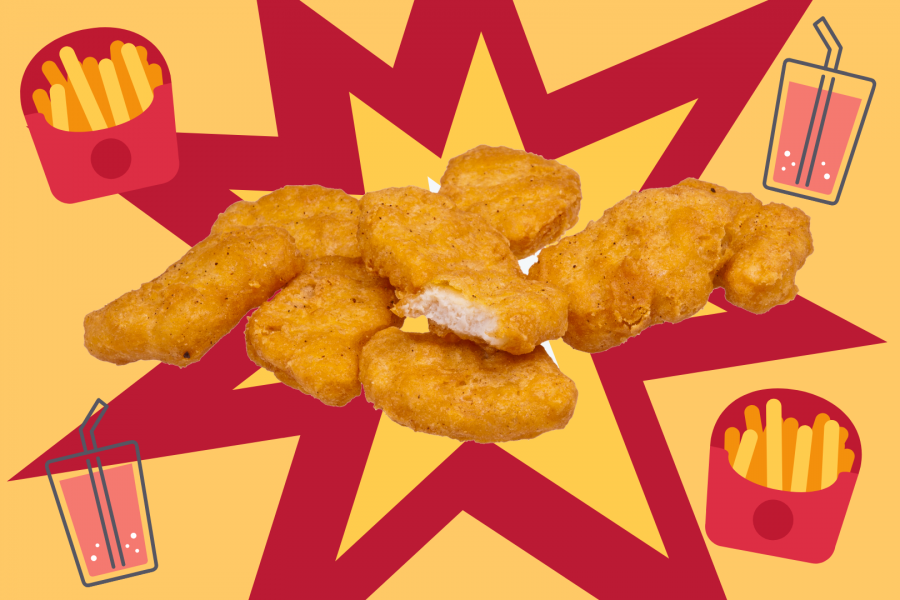 While everyone is locked up in their houses, every day spent away from the fried foods of the grimy streets might lead some to break quarantine and sate their fast food cravings. The pressure is on: you only get the one chance to sneak out and line up in a drive-thru a mile long, your family is on the edge of roasting you on a spit and you only have a $10 bill in your pocket.

But the artery clogging goodness of McDonald’s or Wendy’s can blend into the same old motions, flying by in a flurry of red and yellow with nothing but cheeseburgers, fries and an assortment of ice creams and milkshakes.

Between all these fast food behemoths is a golden savior, cast out of the heavens and discovered by humans, consumed in vast amounts all over the world. This blessing is, of course, the chicken nugget. Humble in every way, but its compatibility with a plethora of different sauces, the crispy brown crust and the warm juicy innards are the grand combination everyone remembers as a child.

Listening to their description is enough to get the mouth watering and the gears turning—you need to scrape yourself out of your bed for the nuggets you know you need. But there are many different nuggets out there. With so many choices, how do you choose where to go to satisfy your needs?

In truth, there are false nugget idols in the world, a slap in the beak to the mighty chicken—to think that its tender flesh might be used to create such atrocities! But there are also genuinely good nuggets roaming the world, ready to be scooped up, dipped and devoured by you!

Fear not the choice: below is a list of entry-level nuggets rated on things such as their flavor, texture, sauce compatibility, you get the jist. Entry-level refers to nuggets that could be found at your local fast food restaurants, without going too far out of your way. Without further ado, consume this list, nugget newbie, and use it to venture out in search of your nuggets.

We start at the lowest of the low with the nuggets from the king himself. At the low, low price—and flavor—of $1.49 for 10 of them, it’s clear that the king should stick to his burgers. As you eat the nuggets, you feel your tongue withering away. Your toes will curl, and your heart will pound.

Okay, it isn’t that bad. At first, the taste closely resembles chicken. The texture is not at all crunchy and the nuggets are almost dry on the inside, like a blended paste. The barbecue sauce is sub-par, but it’s the only thing to save you from the awful aftertaste. Even given the chance to go in full swing with their Chicken Fries, Burger King comes out on bottom. The unique shape is all you get from them. Although they taste like the bottom of my foot after stepping on a chicken, you get what you pay for, and lots of it.

Everyone has had a Happy Meal from McDonald’s at some point in their childhood. These puppies are best when hot, fresh out the fryer and dripping in grease. These are the basic nugget, nothing special and nothing short of average. Although they go well with their barbecue sauce, it’s the ketchup that packs the punch. Mimic the children in your life. Plant some fries on that bad boy, some ketchup and sandwich that between another nugget and BOOM—you’re 5 years old again. In all honesty, they don’t hit much as far as flavor goes. With their tempura-style fry batter being the only flavor besides lightly seasoned chicken, the nugget is more dependent on the sauce and fries, not a suggested stand alone entrée.

Highly regarded in chicken society, and most remembered for its feud with Popeyes over chicken sandwiches in the summer of 2019, a lot should be expected of their nuggets… right? Well, you might be surprised to find that their nuggets were sub-par. Although they had a good flavor with high-quality meat and were crisp outside, their traditional nuggets were unbearably dry. Ball up a whole slice of white bread and chew on it for a moment. This is the fight you should expect when eating a Chick-fil-A nugget. These nuggets are highly dependent on the sauces, so much so that they should be considered a crutch. In fact, just about all of Chick-fil-A’s chicken follows these themes: crazy good on the outside, but bone dry on the inside.

Except for their grilled products. The grilled nuggets Chick-fil-A thrusts out into the world are not only delectable, but they save the whole franchise. It’s almost as if they took all the amazing juice everything else got caught lacking with and put it right on the grill with the grilled nuggets! They in no way rely on the sauces, but go so well with almost all of them—especially the Chick-fil-A sauce. Though the grilled nuggets aren’t the first thing to come to mind when it comes to traditional nuggets, the peppery punch they pack is a good first step towards the treadmill.

The last (but certainly not least) nugget on this list is from the ravenous redhead herself. Wendy sure came in with the hardest hit with her nuggets. What can I say? They go hard—the blend of spices coating this crunch battered baby must be ambrosia from the spice gods. Zeus cut a vein for Wendy as he feared the hungry look in her eyes, and these scrumptious nuggets were born into existence with a lightning bolt-sized PUNCH.

The right amount of juice to keep the meat moist and the breading crispy keeps you coming back for more. Four isn’t enough, so I thank my lucky stars that they have a 10 piece combo with fries to fight for. The spicy nuggets on the Wendy’s menu are in third place on this list, just trailing behind the Chick-fil-A grilled nuggets. They pack a peck of pepper in them, cayenne pepper to be exact. Plenty of it. I may just be a baby, but the spice is just a tad too inconvenient to be tasty. You could always cool it down a bit with some orange Hi-C, which is the go-to drink for just about any nugget—except for Burger King—on this list.

Although these are freaky standalone nuggets, get your freak up to liver-destroying levels with the barbecue sauce. It’s sweet, it’s smokey and it’ll send you dancing to Grandma’s house, but not to share. You’re lost without it, but make sure to get as many as they’re legally allowed to give you, because they open your third eye, allowing you to see into the 46th dimension in which all nugget-related births and deaths are seen. They’re mostly chickens, but I digress.

This starter pack is in no way complete. It isn’t a tit-for-tat list of the best, but rather a list made by someone who not only has had nuggets as a staple in their diet for years, but, like Papa John, ate about 50 nuggets from different fast food restaurants in about an hour. Do your own research and maybe you’ll find a nugget right for you—but don’t go near Burger King, despite how much your wallet whimpers.