Pregnancy in Time of COVID-19 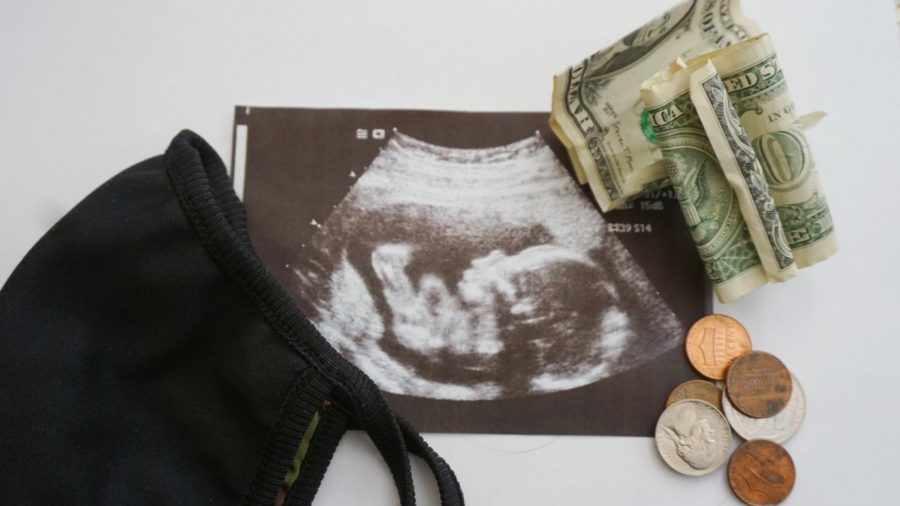 When 19-year-old sociology major Samantha Puerto looked down at her positive pregnancy test she didn’t know that just three months later a global pandemic would severely derail her plans.
Puerto’s pregnancy experience has been far from traditional due to COVID-19. When most women find out they’re pregnant they worry about the birth, the hospital and bringing the baby home. Puerto has the added stress of avoiding infection by wearing two masks and gloves out in public, and washing her hands at least once every hour following instructions from her doctor.
“It’s all necessary of course, but it’s a lot to take in,” she said. “Even now I’m more paranoid and an over thinker because I want to make sure my baby is healthy, but then again during pregnancy you’re supposed to be relaxed and calm.”
Because of the coronavirus Puerto has been forced to go to ultrasounds all alone while her significant other waits in the waiting room, unable to join her. This was something she was most excited about before the pandemic.
During this time one of the worst places to be is a hospital. To minimize infection and to protect the baby, the hospital requires that only one person be in the room while she gives birth. Her significant other will not be able to leave the hospital at all during the long process of childbirth.
Afterwards Puerto might be expected to put on an uncomfortable mask. She may even have to do so as she tries to bond with her newborn baby.
Worst of all is the financial strain due to the pandemic. She and her significant other have both been out of work since the stay at home order was put into place.
“How am I supposed to care for my child when the state cut most benefits, especially WIC, and other grants,” Puerto said, referring to the special supplemental nutrition program for Women, Infants, and Children which aims to provide nutrition for low-income pregnant women, and infants under the age of five.
“I have saved up but having the hospital to worry about and buying diapers for my newborn is going to be difficult the next few months.”
When the government dropped the extra $600 given to each individual on unemployment her income went down to just $97 every two weeks; not nearly enough money to take on the full cost of having a baby.
“I’ve been extremely stressed since month four because of finances, and my immediate family that I live with,” she said. “Their work cut hours and laid off people. It worried us because there’s only one source of income right now.”
The height of Puerto’s stress occurred when the head of her household, her grandfather, was hospitalized with Coronavirus. The 71-year-old was in the hospital for 25 days before being released. During that time his wife was called to hospital multiple times to say her goodbyes.

She was the only one allowed in the room
The hardest thing for Puerto was feeling helpless. She remembers crying constantly, worried for his health. No one was allowed to visit him which made the situation harder for all parties involved.
“It was heartbreaking knowing the last memory I would have of him would be him going into the ambulance,” she said. “So when my grandpa went into the hospital and found out he had the bad case of COVID-19 our hearts sank.”
According to doctors, his lungs will never fully recover. He will have to take pills and have an oxygen mask for the rest of his life.
Her grandmother was rushed to the hospital during this time due to all the stress the family was facing, becoming severely dehydrated due to an infection in her bloodstream.
During this time Puerto said her stress levels were so high she was at risk of losing the baby. She is still considered high risk due to stress.
“I’m most afraid of my body not being able to handle and take care of a human inside of me,” she said. “I’m afraid as well that my body will give up, or when the baby comes I’m afraid of him catching the virus.”
With everything going around her, Puerto’s main goal is to avoid COVID-19 and make sure the baby comes out healthy. She also hopes to graduate from Mt. SAC this year.

The subject’s real name has been changed in order to protect their privacy.