Measure J due to appear on ballot during November election 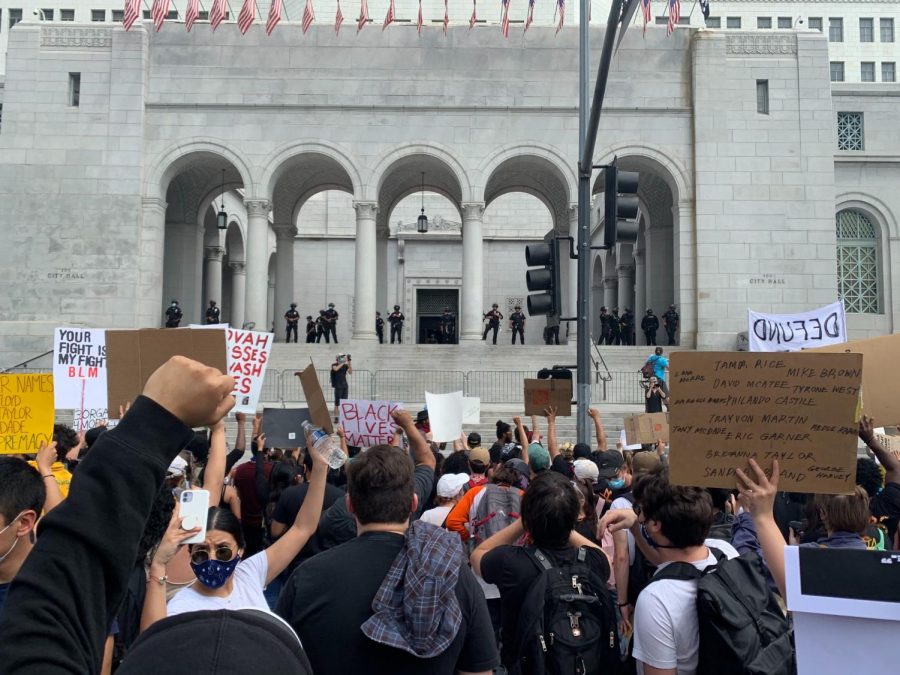 Protesters gather outside the Hall of Justice in Downtown L.A. on June 2, 2020 during George Floyd protests. Photo credit: Monica Inouye/SAC.Media

Outcries this summer during the nationwide Black Lives Matter protests called for the government to “defund the police.” Now there is a ballot measure in Los Angeles County that takes a step in that direction.
LA County voters will see an amendment in the general elections, also known as Measure J, which aims to “Reimagine L.A. County. ” If passed, Measure J will reallocate 10% of funds to community investment and shift the budget away from the Sheriff’s department.
“Any reallocating of funds away from structures that have been harmful and bringing them back into the community is good. It’s long overdue,” Mt. SAC student and Black Student Union member Jeffrey Dorsey said.
The L.A. County’s budget for the 2020 to 2021 year is $34.9 billion. Roughly $8.8 billion of the budget is categorized as general fund, and currently $3.8 billion of this is allocated to law enforcement and the legal system. An even smaller portion of the general fund is allocated as unrestricted revenue, which is what the bill would take from and would amount to $360 million to up to $490 million based on this year’s budget. All in all, it is less than two percent of the county’s operating budget.
If more than half of L.A. County voters vote in favor of Measure J, the county budget will shift money for two specific purposes: to direct community investment, and alternatives to incarceration. The amendment will also prohibit the amount from being used by carceral systems and law enforcement agencies.
Community investment includes youth development programs, job training for low-income residents, access to capital for small minority-owned businesses with a focus on Black-owned businesses and housing support.
Alternatives to incarceration include community-based restorative justice programs, pre-trial non-custody services and treatment and community-based health services.
This measure has been supported by various organizations, including Black Lives Matter LA, United Way of LA and the LA Community Action Network.
Opposition comes from Sheriff Alex Villanueva and sheriff, police, public defender and district attorney’s unions, who said that the amendment is, “a knee-jerk reaction to the recent civic unrest, and not the product of thoughtful deliberation.”
Compared to Minneapolis, whose city council approved measures to eliminate the city’s police department following the presence of a majority of George Floyd protests, Measure J would only be scratching the surface of the LA police budget.
There are at least 18 local ballot measures across the country that have qualified for the November election which address police oversight, police funding and other police-related policies following a summer of protests.