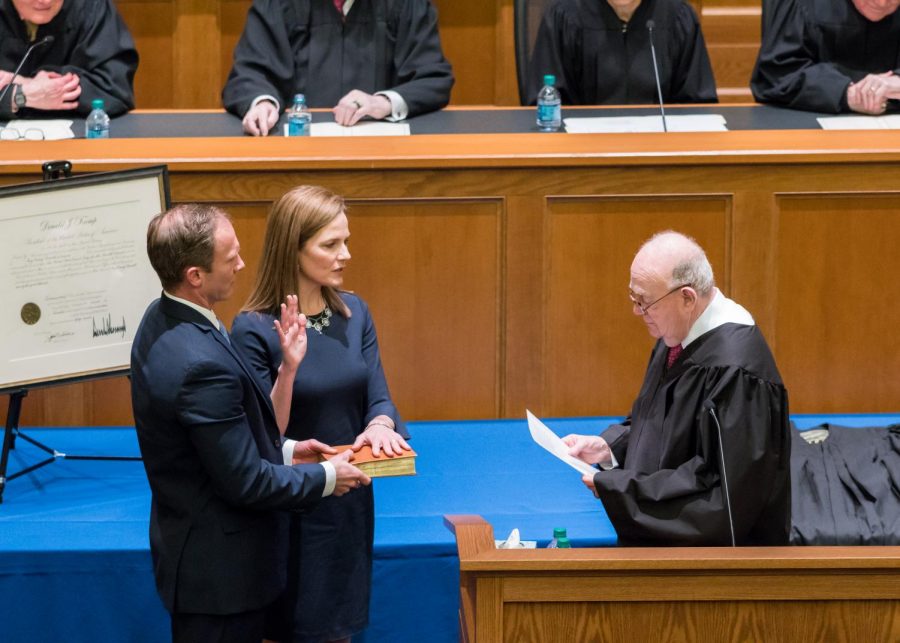 Judge Barrett at her Investiture Ceremony. By VWEAA - Own work, CC BY-SA 4.0, https://commons.wikimedia.org/w/index.php?curid=92960811

Barret implied during her acceptance speech that she will leave her own political views outside her judicial duties, but how likely will she practice that principle?

Barrett is a conservative, a practicing Catholic, and has been vocal about her views on abortion issues.
Mt. SAC political science professor, Raul Madrid said, “It’s very often the case that nominees say that their personal lives would not interfere with their judgments, but oftentimes when looking through their voting records, that’s not always true.”
Madrid cited an article Barrett published in 1998 as a law school professor in which she criticized former Justice William Brennan on his Catholicism, when he had previously stated that he doesn’t let his Catholic values interfere to uphold the constitution. Barrett argued that that was not the proper response for a Catholic judge with respect to abortion and the death penalty.
“She’s telling you in ’98 that in a case regarding abortion and the death penalty a Catholic should see it differently,” Madrid said.

If confirmed, what impact will Barrett have on previous decisions like Roe v. Wade and upcoming trials involving the Affordable Care Act?

Concerning Roe, which established abortion rights, it’s unclear whether she will have the opportunity to reverse precedent of the landmark decision because cases involving abortion will need to be petitioned to be heard by the Supreme Court. However, her presence could bring about more challenges to Roe through related cases.
Madrid said, “the court is more likely to make tweaks to the law to make an abortion harder to get rather than outlawing the right altogether because Roe said that’s unconstitutional. This process would take several years.”
As for the Affordable Care Act, the justices are scheduled to hear oral arguments one week after the election, on Nov. 10.
Madrid said that, “if Barrett is confirmed by that time, she will be on the court for that case and a decision to strike down the Affordable Care Act will be very quick.”

What cards do the Democrats have at this point?

Republicans will push the nomination through to confirm Barrett before the election, with opening hearings beginning as soon as Oct. 12. However, if proceedings happen after the election, and if Joe Biden wins, there are a couple things the Democrats can do.
First, they can stall. They can bring up an impeachment hearing in the House of Representatives against Donald Trump, again, or the United States Attorney General Bill Barr. Bringing up an impeachment case will force the Senate to clear their calendar and further delay the judicial confirmation process. This would be very controversial.
Second, the Democrats can refuse to vote on her appointment during the lame duck period, which is the final period in office before the successor’s term begins. The optics of Republicans moving forward during the lame duck period, especially if Republican senators lose their seat, would look bad from public opinion. Nevertheless, it is possible that Republicans will push the votes through anyway, for the sake of preserving their conservatism in one branch of government.
If the senate flips from majority Republican to majority Democrat and if Joe Biden is elected, Democrats can push reform to add more seats to the Supreme Court. Adding more seats will allow Biden to appoint liberal justices, balancing the court again.
“It’s very dangerous because it would be seen as retribution and a guttural response to reacting to politics in a way that they shouldn’t be. But assuming that Republicans regain control of the senate, it’s likely they would do the same thing,” Madrid said.
“There’s no telling that Joe Biden will sign a law like that, but we’ll see.”