5 Political Families With Opposite Ideologies 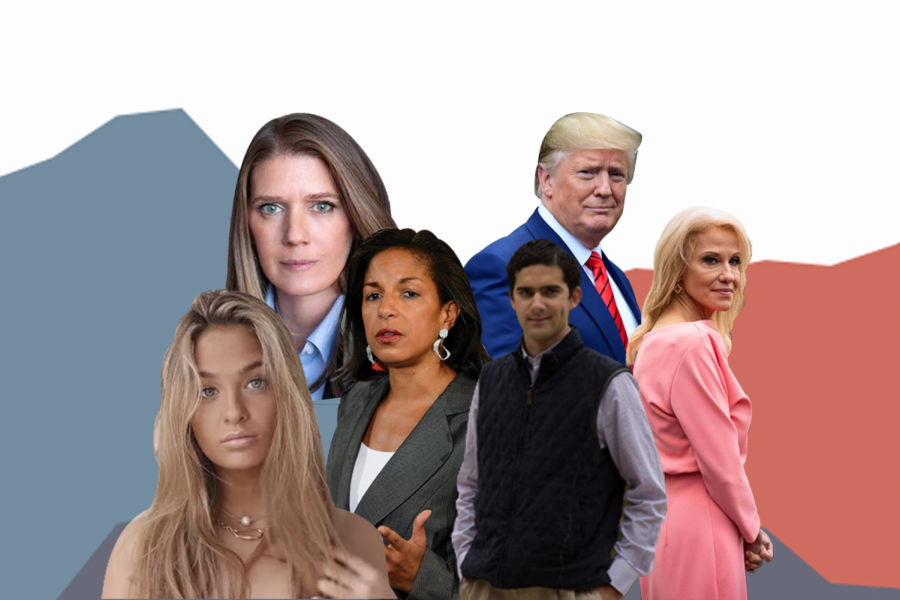 Family tends to have a large influence on a child’s politics, but it’s not uncommon that children’s ideologies tend to grow more different than their parents as they grow older, and especially when they go away to a college far from home. In an increasingly polarized country, even political families have disagreements.
Here are some children or relatives of politicians who hold very different beliefs as them.
1. Claudia Conway, daughter of GOP consultant Kellyanne Conway
Claudia Conway is the 16-year-old daughter of Kellyanne Conway, President Donald Trump’s former campaign manager and political consultant. She is an active TikTok user and her videos have gone viral for her harsh criticisms of President Trump, her support for Black Lives Matter and her videos involving her mother in an intimate family setting. Her father, George Conway, is also critical of the president, but also holds conservative views she disagrees with. She had publicly announced her wish for emancipation from her family which resulted in Kellyanne Conway leaving her position in the Trump administration to focus on her family.
2. Mary Trump, niece of President Donald Trump
Mary Trump is the niece of President Donald Trump. Her father is the president’s late older brother, who died after his struggle with alcoholism. She is a Ph.D. holding clinical psychologist and has published a tell-all book this year detailing the Trump family history through recorded conversations, memory or other documents. She had even released recordings between herself and her aunt, Maryanne Trump, in which she criticizes her brother’s actions since the beginning of his presidency.
3. The McConnell’s, children of Majority Leader Mitch McConnell
Mitch McConnell is a Republican Kentucky Senator and the Senate Majority Leader. His daughters are speculated to be out of line with their father’s politics according to a profile from the New Yorker. The eldest, Eleanor, is a registered Democrat, the middle daughter Claire’s husband has criticized Justice Kavanaugh’s confirmation and the youngest Porter is a progressive activist and campaign manager for Take On Wall Street, a coalition organized around moving a financial reform agenda to address the predatory economic power of Wall Street banks and billionaires.
4. Stephanie Hofeller, daughter of GOP strategist Thomas Hofeller
Thomas Hofeller was a prominent Republican strategist and redistricting consultant. After his death, his daughter, Stephanie, seized ownership of her father’s files and turned them in to The Common Cause, an advocacy group that fights to hold the government accountable and empower disenfranchised voices. The shared files led to developments proving that Republican state officials gerrymandered districts in North Carolina to unfairly favor Republicans in elections. In an interview with NPR regarding her commitment to transparency, she said, “if I were to find something, I would most certainly share it.”
5. John David Rice-Cameron, son of former Obama administration official Susan Rice
Susan Rice was the national security adviser and U.S. ambassador to the United Nations during President Barack Obama’s tenure. Her son, John David, was known as the president of Stanford College Republicans and he would host events called “Make Stanford Great Again.” In an interview with NPR, the former ambassador has said, “my son and I will have some robust disagreements over some matters of policy, not all. And yet, at the end of the day, you know, I love him dearly, and he loves me.”