Pearl Harbor survivor recalls her first major event in history during her second, the COVID-19 Pandemic 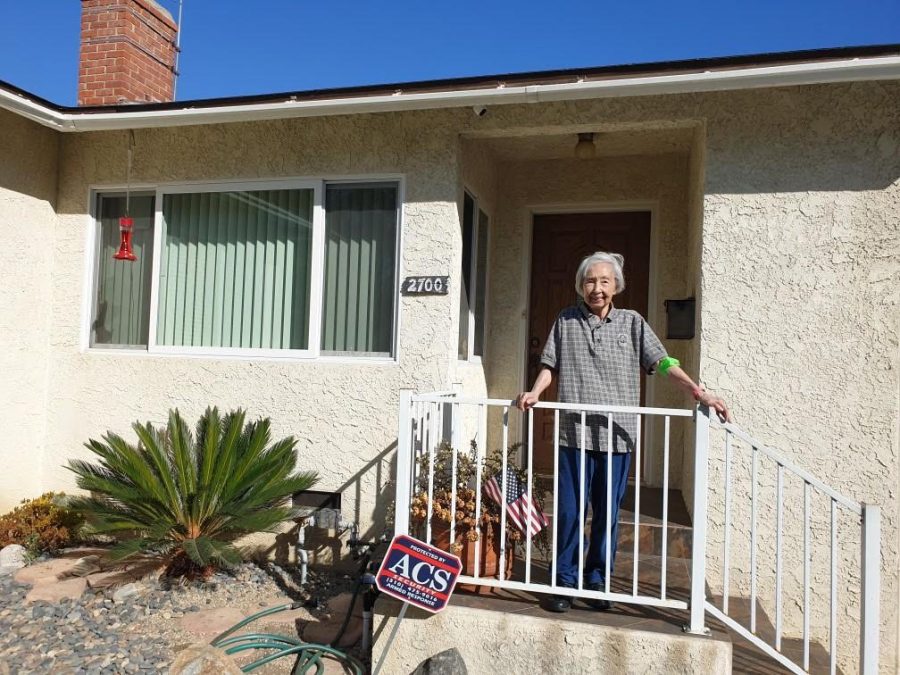 Ann Inouye outside of her home in Los Angeles, CA. Photo by Monica Inouye/SAC.Media.

On a warm and humid afternoon, a hot breeze blew through the front window, rattled the vertical blinds, then escaped to the back of the house through the screen door. Ann Inouye shuffled to the dining area, the wood floor croaking with each step. At the dining table, she opened her purse and fiddled with a plastic wallet insert that held family photos. Her veiny, slender and wrinkled fingers flipped through the pictures over again, until she found who she was looking for.
She held a black-and-white portrait of a man. He appeared middle aged and sported a dark suit, his black hair was gelled back, he wore round glasses, his mouth formed a straight line and his gaze drifted to the side of the camera.
“My dad, Masao,” she said.
At 88-years-old, Inouye could still remember small details of her upbringing in Hawaii.
Inouye recalls an uncertain, frightening and even exciting experience of her own childhood similar to today’s eerie times – the bombing at Pearl Harbor.
“I was just going on 10, it was on a Sunday, we were all getting ready to go to church, but then the bomb fell a block from where my mother’s house was. It came over our house,” Inouye said, then she made her hand glide above her head like a plane and continued, “we heard a whoosh, and then we heard a blast.”
Before the pandemic, Inouye would visit her remaining family in Honolulu every year. The streets where her childhood home stood are now popular tourist attractions and hotel developments.
“My mother lived on Algaroba which was one block down. It was on the other side of that block, on King Street, which is the main street, and [the bomb] hit a,” she paused before she exclaimed, “a drug store!”
She often paused to recount names and buildings, and when she remembered she declared the details with gusto and certainty.
“We all moved to Washington Middle School, which was four or five blocks away from the house,” she said. “But while we were at the middle school, at the gym, another bomb fell in the middle of the yard at the middle school.”
After the second bomb fell, her family returned to their home and were joined by cousins, aunts, and other family who wanted to stay close.
“The thing I remember was that my parents put newspapers to black the house. We didn’t want them to see the light go on when we were home,” she said, then stressed, “anybody. We didn’t know who was going to come after us. We didn’t know anything – we were just afraid.”
The whole neighborhood participated in what they termed blackout. Nobody knew what was going on, so they kept to themselves and made no trouble. Until one day, officials came to question her father.
Masao Uno migrated to Hawaii to raise a family. He was a Japanese citizen who worked for customs at the Japanese bank in Honolulu and was questioned for his ties to the enemy country. He was gone for about a week before eventually returning home. The family thought the government would send him to relocation camps.
She was certain her siblings stayed out of school leading into the holiday break, and eventually everything returned to normal. Everything except the closure of Japanese schools. Japanese families in Hawaii would send their children to Japanese lessons every day after school, something that Inouye despised from her childhood. After their closures, she and her other young siblings were delighted.
“It was exciting, and it was scary!” Inouye said.
She lived in Hawaii until she was 23, when she decided to start her life on the mainland. The historical significance of Pearl Harbor never dawned on her, not even as a teenager.
“We were just having fun. It was an interesting time growing up!”
Nearby, the television buzzed quietly playing the Saturday afternoon local news – developing details of President Trump’s coronavirus diagnosis.
Inouye has never been one for politics. This year is different.
“Somebody needs to get him out of there,” she said, hinting at President Trump.
She hadn’t voted in the last 10 years. Before, her polling place would switch between the local library and another location, and it eventually frustrated her that she stopped showing up. She was happy to have access to mail-in voting.
“It has never been chaotic like this before. Before I didn’t know what was going on and I didn’t know what his thoughts were at the time. Now I do and it’s even worse,” Inouye said.
On a long vertical notepad, she wrote the numbers for the California propositions down the left margin in a light pencil. On the top of the page, she wrote column headings consisting of a capital “Y” for yes and a capital “N” for no. A line down the center of the paper divides the Yes and No columns.
Every time a commercial for a proposition showed up on TV, she marked a tally on her notepad, and she would have decided her vote based on whichever side she had seen most commercials for.