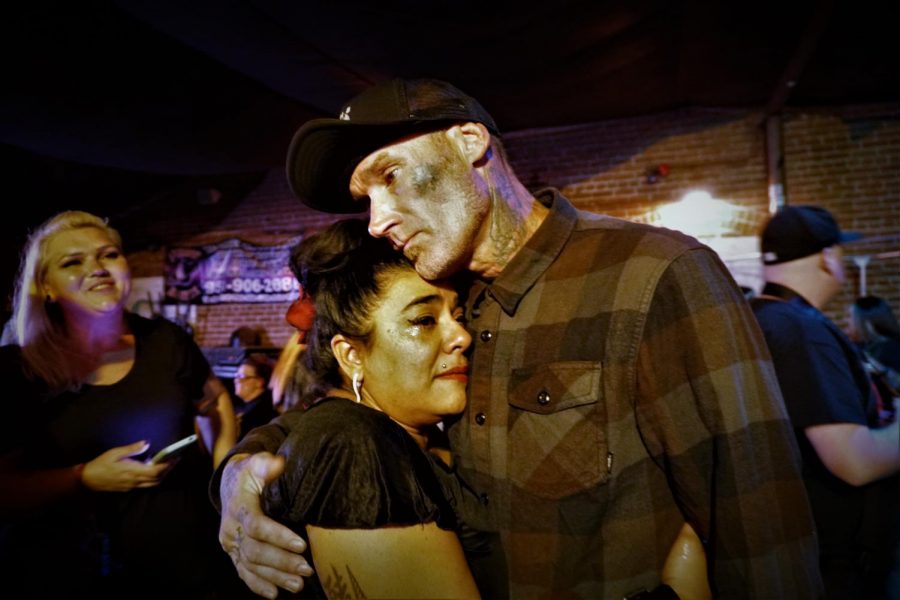 Characters Sports Bar is a punk rock/motorcycle dive located in Pomona, California. It has hosted some of the most raunchy events for the past 60 years. This establishment has served its patrons diligently with fast cocktails, billiard tables and beer on tap.

On Sept. 4, they served something more; A benefit and celebration of life for Anthony Ray Rivera, 45. According to the family, Rivera was shot. He succumbed to his injuries from head trauma in Pomona, California on Aug. 28.

This is what was given on the night of Mr. Rivera’s memorial. The bar was stacked with vices for numbing and the cigarette filled air from friends and family gave a sense of calm amongst the guests.

Music feeds the soul. With every beat it feels as if with every vibration, music mimics the heartbeat. We turn to instrumentals and voice for comfort, especially in times of grief. The crowd consisted of skinheads (non-nazi), punks, cholos and the everyday man and woman. Gonzo and most of the attendees were in tears and clearly inebriated by the loss of such a dear friend.

Gonzo did not stand alone in the pain; nobody did. Loss and grief are horrible feelings to stand alone in. There is so much to say about the immense emotion that filled the outside air; you could cut it with a knife. Although the venue was stacked with bodies, it was evident that everyone there held a certain feeling toward this night. There were tears, laughter and – rightfully so – anger.

The back of the venue continued to fill with bodies in memoriam of Rivera. A river of black shirts, studs and patched clothes flooded the room, most of them with a red beer cup in their hands, or cocktail; whatever their preferred drink was that night.

When the opening band began to play–known as XO Toxins–it was as if an alarm went off.

The riffs and percussion sent a message for the crowd to slowly sway and beat their heads up and down to the rhythm that the musicians supplied. The feeling on the patio suddenly shifted to that of a different emotion.

Then it happened… the mosh pit. Friends and family rammed into one another in a sudden blitzkrieg of dancing. It’s hard to not think of it as a punk Hakka, dancing strongly in remembrance of a lost friend. The chaos of flying fists and stomping feet served as a release.

As soon as every song ended, loud cheers from the crowd filled the air along with the heat that was created from the thrashing of everyone’s body.

Bottles of water were thankfully not in short supply as many were thirsty for more than an alcoholic beverage after the aftermath.

The second band, Underdog, delivered a different vibe to the whole room. Instead of the traditional thrasher punk sound, they came to the stage with saxophones, alto and baritone, a keyboard and trumpet. Their jazzy sound of not just their instruments but also the swing of their singer was able to calm the crowd to their seats. It seemed appropriate to allow the guests and patrons to have a more calm undertone before leaving the venue in sight of why everyone gathered for.

The night ended with hugs and handshakes that built a bridge which formed part of new and old friendships.

It’s hard losing a loved one, but it’s comforting to know that the ones we’ve lost can live on vicariously through us all. We can feel them in the rhythm of a beat with the power of company through times like this.