The Return to the Ravine 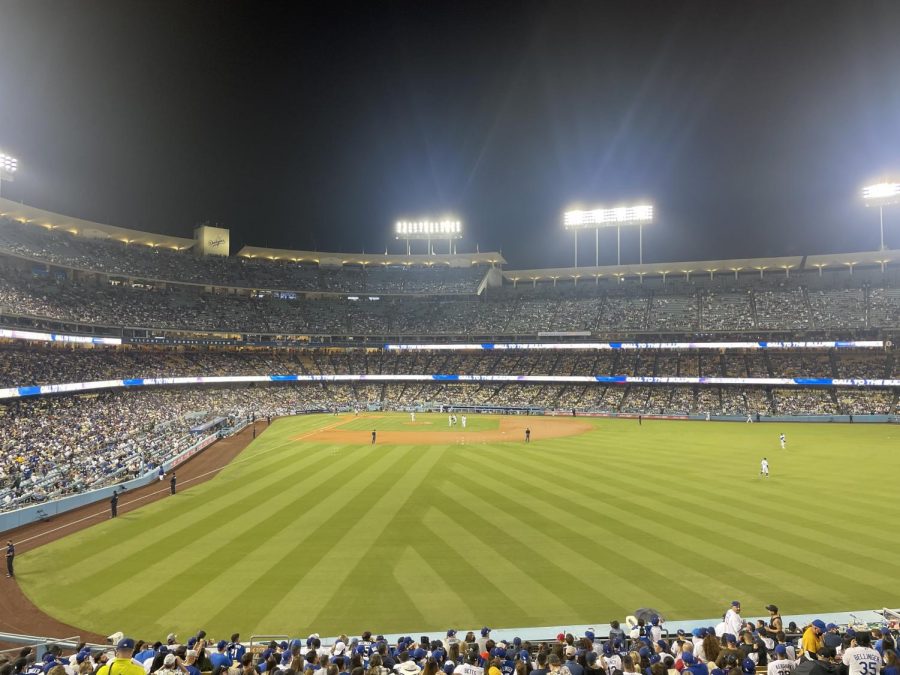 It does not feel like a complete summer without catching a game at beautiful Dodger Stadium. Prior to 2020, Dodger Stadium was packed with rabid fans cheering on their beloved Los Angeles Dodgers to no end.

Dodger fans are a spectacle when you go to home games. The mass of super fans all wearing Dodger Blue and white doing “The Wave” looks almost like the waves off the Malibu Coast. The roars that emanate from the stadium can be heard from more than a mile away.

Then in 2020, as our boys in blue were on their way to finally win that elusive seventh championship; it was all taken away.

Months were passing by and it was starting to feel that we were not going to be able to see our teams play another season. Then after months of negotiations between owners and players, the world of sports was finally back.

Yet it was going to have to go through a few major modifications. One tragic change being that games were going to have to be played without any attendees in the stands. The sports community were forced to stay at home and cheer their teams from their couches.

It was very eerie watching our favorite teams play in completely empty stadiums. These stadiums that many of us consider to be a second home began to look like ghost towns on television. It was an adjustment that both athletes and fans were going to have to get used to.

The athletes were affected by the loss of the loyal crowds cheering them on. The people help the players get pumped up to play, so the Dodgers took measures to help the players get acclimated. Cardboard cutouts of fans were put into the stands; they could be bought by any fan on the team’ website for the price of $100.

Fans having the opportunity to be a part of this strange moment in sports history will be remembered for generations to come. Along with the cardboard cutouts, there was also an interactive soundtrack of crowd noise that was played over the loudspeaker to give the players the illusion of actually having a live audience. After a team hit a home run, the crowd noise would respond accordingly with a giant roar. However unconventional these methods may have been, it let our players feel at home as much as possible..

With the 2021 season, however, COVID-19 restrictions have become more lenient. Fans are now allowed back in the stands of Dodger Stadium.

It slowly started at the beginning of the season with only allowing partial capacity in the stadium. Then after June 15, Dodgers Stadium was allowed full capacity. This would lead to the Dodgers having the largest sellout crowd in American sports since the pandemic. Their “Reopening Day” had 52,078 fans in attendance, almost giving them the sense that they never left.

The energy of the stadium feels just as electric as it was before the pandemic. The return to Chavez Ravine was something that the people yearned for. The crowds are just as rowdy and rabid as they were before. The loud chants of, “LETS GO DODGERS” or “CHARGE” emanating from the stadium shook the ground. Chavez Ravine looks like it is healing quite fine.

The Dodgers are also doing their part in helping stop the spread of COVID-19. To adhere to CDC guidelines the Dodgers made a lot of modifications to their facilities. The first noticeable change being the addition of signs placed all throughout the ballpark that state that the use of masks is mandatory all around the ballpark.

Another new change is that all purchases at the stadium are cashless. They are doing this to limit the amount of contact that fans have with ballpark staff. The Dodgers are also, like many other teams in the MLB, offering vaccinations to those that have yet been vaccinated.

The Dodgers are trying to make sure that the fans that they love stay in the stands.

Things are starting to move in the right direction at Dodger Stadium. Yet spikes in COVID-19 outbreaks and the rise of new variants, such as Delta, are threatening to take live sports away again. The Dodgers responded and doubled down with their guidelines by enforcing a strict mandatory mask mandate to protect their fans. The Dodgers also increased their sanitation effort by having sanitation crews working throughout games, as the organization takes strides to ensure the safety of everyone in attendance.