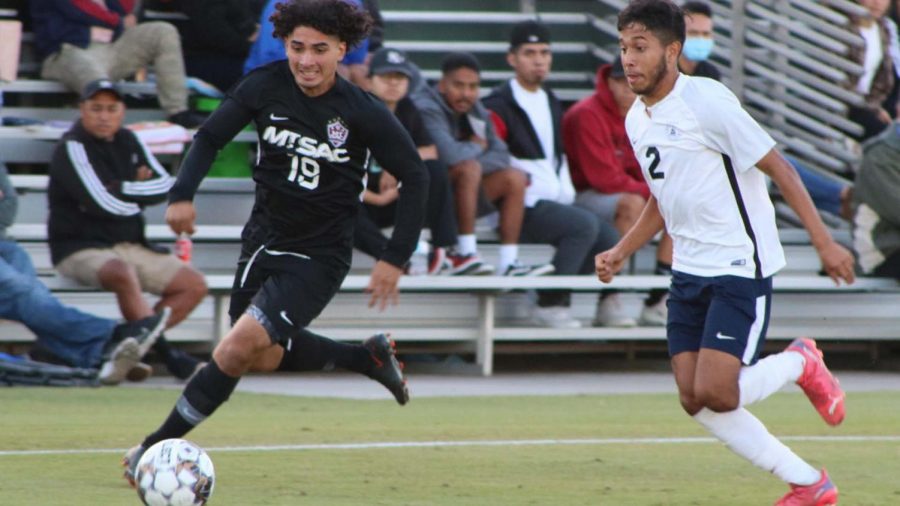 Eddie Cabrera (19) is running down field to get closer to the a scoring position but Brandon Galindo (2) is right behind him and is not going to let him through.

Mounties men’s soccer took control early against the El Camino Warriors at home on Oct. 12 by maintaining possession for the majority of the first half with a handful of attempts, but it was not until midway through the first half that they scored their first goal.

The first goal came 25 minutes into the game, when freshman forward Edward Castro scored with an assist from fellow freshman forward Andrew Vazquez. Castro was able to shoot past the goalkeeper who ran toward him in an attempt to cut down the angle.

The Mounties were not satisfied with only one goal on the board, so they kept pushing to try and score more.

Their effort prevailed when the second goal came minutes before the first half ended. Castro scored his second goal of the game, this time with the help of freshman defender Andre Ramos. Castro was able to tap in from Ramos’s header off a freekick outside the penalty area.

The first half ended with the Mounties on top 2-0 over the Warriors.

During the second half, the Warriors tried to get on the scoreboard by playing aggressively. The Mounties showed some frustration with the tempo and received four more yellow cards in the half.

It was a tug of war until the Mounties finally sealed the game with their third goal. This time it was from Vazquez. Castro returned the favor by assisting Vazquez to score seven minutes before the game ended. Vazquez chipped past the goalkeeper to wrap up the 3-0 victory.

Throughout the game, Mounties’ goalkeeper Jacob Cardenas called out at his defenders to tighten the defense. He made five saves and held his second clean sheet this season in this shutout game.

The men’s team is currently on a six-game winning streak, and the team’s 3-0 shutout improved their record to 9-1 overall and 3-0 in the South Coast Conference. They are currently sitting at the top of their conference.

The Mountie women’s soccer team also had a thrilling victory against the Warriors.

They dominated the first half of the game with the majority of possession and numerous shots on target but with no goal to show for it. The short-passing game helped the Mounties to find a lot of opportunities but they could not find the back of the net.

It was not until the second half and 51 minutes into the game that the Mounties got a chance to open the scoreboard. Sophomore midfielder Julia Luceo scored her first goal of the season with an assist from freshman defender Fatima Arnold.

But the lead was short-lived, as the Warriors found the equalizer minutes later.

The Mounties were determined to keep their first place in the conference and their determination paid off 78 minutes into the game.

Freshman midfielder Karissa Vela gave the Mounties back their lead with her fourth goal of the season, and the Mountie’s goalkeeper made two important saves to pull off this win.

The women’s team is currently on a four-game winning streak, and this 2-1 victory against the El Camino Warriors improved their record to 8-2-2 overall and 3-0 in the South Coast Conference. They are currently tied with Rio Hondo for first place.

Both teams will take on the Pasadena City Lancers at home on Oct. 15. The men kick off at 5 p.m. and the women follow at 7 p.m.