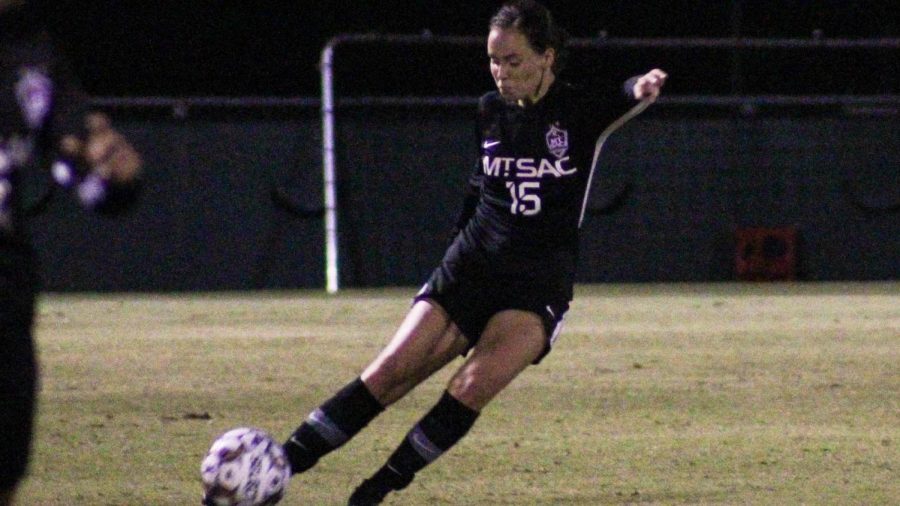 Coming into this game with six wins in a row, Mounties men’s soccer was aiming to continue their streak against the Lancers who had lost their last four games.

The Mounties tested Lancers’ defense numerous times in the first half, but the Lancers disrupted the Mounties’ plan by closing in on them to quickly defend the ball.

Right before the end of the first half, a rough foul was committed by Lancers’ Mario Urbina (10) just past the halfway line on Lancers’ side which led to some pushing and shoving. Urbina received a yellow card for this foul and the referee broke the players up before the freekick was taken.

Even with 10 shots on goal, the Mounties could not find the back of the net. Both teams were scoreless at halftime.

During the second half, the Mounties continued to press on with wave after wave of attack. The majority of the game was spent with the Mounties attacking downfield.

With 20 minutes left in the game, another foul was committed just outside the penalty box by a Lancer defender. The Mounties’ players tried to appeal for a penalty kick, but the referees agreed it was outside of the box.

The frustration was obvious, especially toward the closing minutes of the game as Mounties attempted to get on the scoreboard.

Despite their best effort, with a total of 18 shots on goal, they could not get past the Lancers’ goalkeeper. Both Mounties’ goalkeepers Jacob Cardenas and Ian Johanson made two saves to keep this game a 0-0 draw.

The Mounties are still undefeated in their last seven games, and their record is now 8-1-1 overall and 3-0-1 in the conference.

Right after the men’s match, the women’s soccer teams took the field.

The Mounties were on a four-game winning streak when they hosted the Lancers and the Mounties will need to win to stay tied for first place in the South Coast North Conference. This win would not be an easy one as the Lancers had a blowout win in their last game.

The tone was set by the Mounties as soon as the referee blew the whistle as the Mounties were on the attack, pressing forward every time they had possession.
Although they had the majority of the possession during the first half and numerous attack chances, they could not score a goal.

It was not until 44 minutes into the game that found the back of the net.

Freshman midfielder Karissa Vela raised above Lancers’ defenders and headed in her fifth goal of the season to give the Mounties a 1-0 lead right before halftime.

The Mounties were not satisfied with the one-goal lead, so they pressed on and had possession most of the time during the second half. They took their attack to the next level by pressing as high as the penalty box and they chased after the ball to keep the game under their control.

They kept the intensity high but they could not find another goal before the game ended. Freshman Goalkeeper Leila Peregrina made four saves this game for her fifth clean sheet this season.

The Mounties’ women expanded their winning streak to five games and improved their record to 9-2-2 overall, 4-0 in the conference.

The men’s team was originally scheduled to play San Bernardino Valley at home on Oct. 18, a rescheduled game from Oct. 1, but it was cancelled and later clarified as a forfeit. Mt. SAC was credited with a 1-0 win as a result.

Both teams will play an away game against the East Los Angeles Huskies on Oct. 19.