Smell the Flowers, but Read the Paper Too

Political apathy is what got us into this mess 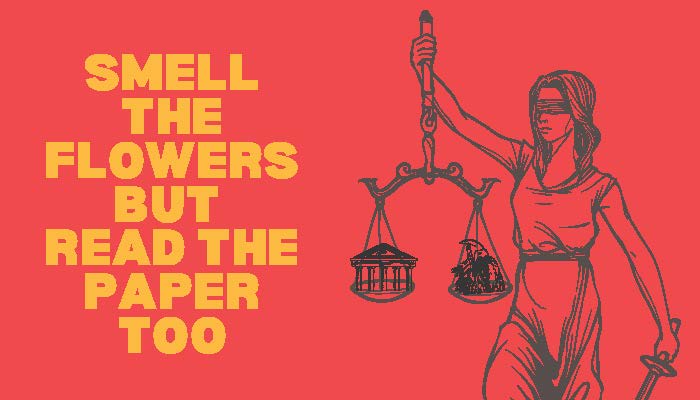 In an era comprised of division, animosity and red tape, you may feel discouraged from being attentive towards the political affairs in Washington or even your city hall. Maybe you perceive the power of your vote as insignificant or maybe you have taken a stance only to be met with hostility. Regardless, your political apathy should not continue further. The gears and cogs of our democratic processes cannot operate as intended without the people’s full participation, and the longer you wait to fulfill your civic duties, the longer the nation remains in a state of disorder.

The founding fathers armed the nation with the power to be politically active and vote to prevent the deterioration of our democracy. In an 1822 letter, James Madison wrote “A popular Government, without popular information, or the means of acquiring it, is but a Prologue to a Farce or a Tragedy; or, perhaps both. Knowledge will forever govern ignorance: And a people who mean it to be their own Governors, must arm themselves with the power which knowledge gives them.”

You might think that this farce or tragedy, as Madison calls it, would be embodied by overt tyrannical rule, coups, burning cities and other colorful imagery, but the reality is more subtle. Significant portions of the population relinquishing their vote empowers unqualified and dishonest policymakers to infiltrate the government body. Consequently, these conmen-turned-lawmakers write legislation that legitimizes their corruption.

Amoral politicians have seeped into every last crevice of the governmental bedrock. The ramifications of widespread political apathy are here and unavoidable. In the executive branch, Texas Gov. Greg Abbott ratified measures that deprive women of their right to an abortion. In the judicial branch, Sacramento County Superior Court Judge James P. Arguelles, appointed by former President Donald Trump, extended the deadline to gather signatures for the partisan recall effort against Gov. Gavin Newsom. In the legislative branch, Democratic Sen. Joe Manchin–who owns stock in his son’s coal company–is obstructing the White House’s climate agenda.

The stigmatization of political discourse has sowed the idea that a person is either political, or they are not. They are aware of everything happening in Washington, or they are clueless; they vote in every election and canvass for politicians, or they abstain. This false dichotomy has rippled through the public consciousness and has caused countless people to shut out politics entirely.

You do not need to go out on the streets donning a star-spangled getup with a red, white and blue shield in one hand, an automatic machine gun in the other and a bald eagle on your shoulder to prevent democratic decay. As citizens of the United States, we are vested with the power to scrutinize the actions of politicians, oust them from their positions and vote in individuals who have our best interests in mind. This is the sole method in which we can resist the growing cabal of self-serving politicians.

Political awareness is not a job nor does it require unreasonable vigilance. It can be as simple as subscribing to newsletters, reading headlines or even just following news accounts on social media. However, it is of utmost importance to steer clear of fake news; it is more dangerous to be misinformed than uninformed.

In 2018, a blue tsunami crushed the Republican federal trifecta by returning the House to the Democrats. In 2020, the votes of over 80 million people turned the White House blue, and in 2021, Georgians gave Democrats a paper-thin majority in the Senate. As a result, money has been pumped into the damaged economy, COVID-19 vaccine rollouts have been militarized, and we are on the cusp of historic climate and infrastructure legislation.

A significant portion of the votes that made these accomplishments possible only came to be as a rejection of the loud and explosive Trump presidency. In other words, it was Trump’s turbulent, boastful and overreaching personality that energized such a monumental amount of individuals to pay attention to politics and vote. That said, the reality of the situation is that the government is still brimming with politicians who share Trump’s recklessness but not his gaudy attitude.

This is why it is essential to always be conscious of political matters, to always care who is representing you and your needs, now more than ever. Next year’s midterms are projected to be an arduous uphill battle for the Democrats unless voters go to the polls in overwhelming numbers. Consider the far-right rhetoric that the Republican Party has endorsed post-Trump: the voter suppression, the science denial, the election tantrums, the war on education and more. Now contemplate a scenario where an apolitical majority paves the way for this faction to control both chambers of Congress, the Supreme Court, and then quite possibly the presidency in 2024 and realize we could be on this trajectory in a year’s time.