Mounties improve their records with a decisive victory over El Camino 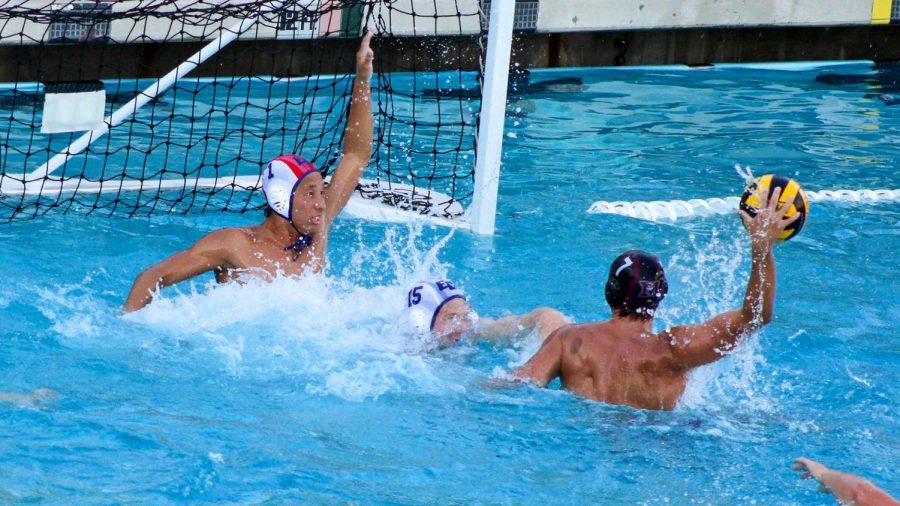 Mounties' Luke Noblett (7) takes aim to score one of his five goals against Gary Bellingham (1) of the Warriors on Oct. 15.

Undefeated in conference, the Mounties were ready to keep up the momentum when both women’s and men’s water polo faced off against the El Camino College Warriors at home on Oct. 15.

The women’s team started off the evening strong with an undeniable pool presence.

Facing a 5-6-1 Warriors team with a 1-3 conference record, the Mounties were hoping to stay undefeated in conference (4-0) and improve upon a 9-12 record.

The Warriors fired first with Melissa Brill (2) scoring the first goal of the game.

Brill’s opening score would be El Camino’s only goal of the half, however, as Mt. SAC responded quickly and rallied back for quick goals from Madison Nicholas (13) and Katelynn Howell (12). Howell’s goal came just 20 seconds after Nicholas’ as they cut through the Warriors’ defense with precision.

With these scoring drives, the Mounties shifted to defense and preserved their 2-1 lead with further defensive steals as the goalkeeper brought forward numerous stops.

The Mounties went further in the second quarter when Alexis Ramirez (8) made a game changing steal. While it looked at first like Ramirez had only stopped the Warrior’s drive, she quickly converted the steal into a goal after passing the Warriors’ goalkeeper Sophia Caravello (1) to bolster the lead 3-1.

El Camino did their best with every possession, but Mt. SAC’s Jahanna Palmer (1A) was a defensive stalwart ensuring no more goals could be scored by the Warriors before the half.

Howell had an explosive third quarter with a goal just 38 seconds in and an assist to Nicholas with just 33 seconds on the clock to close the period 5-1.

Not to be denied, Xen Allen (5) scored 37 seconds in the fourth quarter after having assisted Howell in the prior quarter.

With a 6-1 lead, Grace Rowland (2) assisted Allen and Howell on their next goals before closing out the game on her own goal for a final score of 9-1 The Mounties are now 5-0 in conference.

Not to be shown up, the Mt. SAC men’s water polo team dominated the Warriors as well.

Facing a 4-15 Warriors squad with a 0-2 conference record, the Mounties looked to stay undefeated in conference (2-0) and improve upon a 5-12 record.

Just 35 seconds in, the Mounties set the tone with a quick goal from Ivan Morales (10). Morales’ goal set off the Mounties on a tear of scoring at least once a minute for the rest of the quarter as goals followed from Aidan Murphy (2), Adam Dow (14), Luke Noblett (7) and Nicholas Brock (6).

Dow scored back to back goals before he scored his third goal in between Noblett’s two goals this quarter. This offensive firepower ended the quarter 8-0, but the dominance did not stop for the second quarter.

Noblett scored two more goals pushing the Mounties to a 10-0 shutout of a lead before the Warriors were able to rally back and add two points to the board with a goal from both Myles Fourmy (15) and Aidan Gutierrez (10). The Mounties responded with two more goals of their own when Murphy got in one more goal before Noblett’s third goal of the quarter to finish the half at 12-2.

The third quarter was less of an offensive shootout with Mounties’ Steven Zimmerman (17) scoring before an exclusion against Mt. SAC set up the Warriors’ Anthony Taleff (4) to respond with a goal for El Camino, pushing the score to 13-3.

To close out the quarter, Dow and Trey Mickelson (21) each scored a goal to end the quarter 15-3.

The final quarter started off strong with a goal just 19 seconds in from Murphy, but the Warrior’s goalkeeper and defensive play held the Mounties back in order to allow El Camino’s Parris Ruth (12) to answer back with a goal.

After an exclusion, Trevor Ingersoll (13) came back with a vengeance and scored his first goal of the night only to have the Warriors answer back with a goal from Zackary Johnson (13).

El Camino’s Ruth scored right after Johnson to lessen the lead, but a final closer from Tate Cauley (18) of the Mounties, with just 34 seconds left on the clock, sealed the game 18-6.

Men’s water polo took on Las Positas, Merced and Sierra at the Cuesta College Tournament on Oct. 16, while both water polo teams will face Cerritos on the road on Oct. 20.