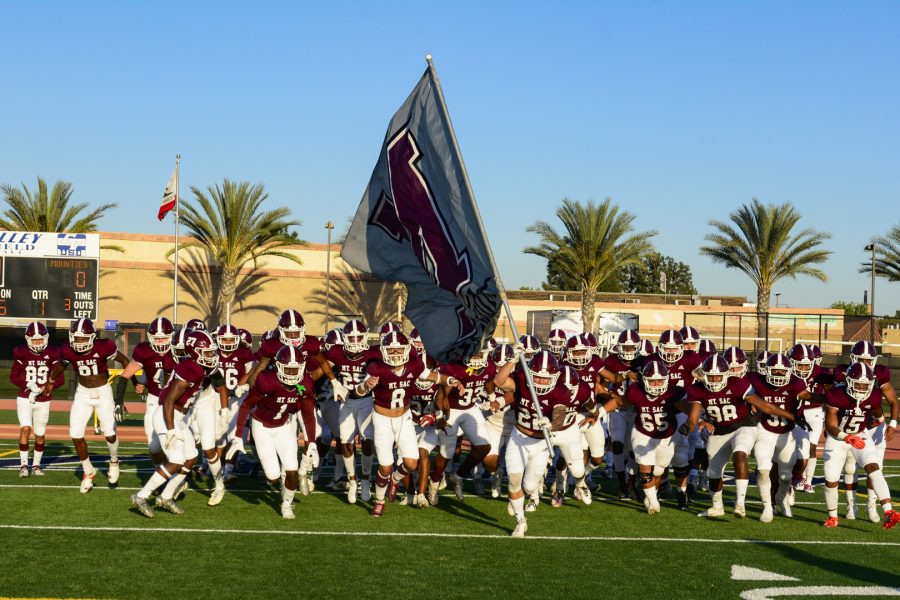 Mt. SAC Football run onto field for a game.

The Mounties looked as uncertain as the times as the squad struggled against the El Camino Warriors on Oct. 16.

Unlike the Mounties football team of weeks past, their first drive of the game ended in just under a minute with a turnover on downs, and once they got the ball back again they were held to a field goal.

The Warriors defense was relentless, sacking quarterback Alex Flores for a loss consistently to move the Mounties back for every inch they had gained.

While Flores’ pass to the Mounties’ explosive receiver Shemar Savage would have ended in a touchdown in any other scenario, the Warriors would stop that 45 yard gain by reclaiming 10 yards in sacks and making a defensive stand at the two yard line to force Noah Carlton to kick a 24 yard field goal.

The very next drive, in about two minutes, the Warriors answered back with a field goal of their own showing an efficiency that would later spell doom for Mt. SAC.

While the quarter ended 3-3, the momentum was already shifting.

As the Mounties’ defense made another critical stop against the Warriors’ opening drive, the offense sputtered on a failed run that led to a fumble – and ultimately – a turnover.

On only their second play of the quarter, Mt. SAC gave the ball back at just about where it was initially punted to.

The Warriors quickly capitalized on this for a touchdown before the Mounties would finally see some luck in converting a 4th and 1 in El Camino’s redzone. That play resulted in a touchdown to tie the game. El Camino would then answer back with yet another touchdown.

Seeming like a traditional offensive shootout from Mt. SAC, it became clear luck was not on the Mounties side when another run resulted in a turnover from a forced fumble.

El Camino quickly converted on this gain again with another touchdown to set the score 10-24 with the Warriors on top.

Keeping it close, Flores fired several missiles to Jordan Erby before Erby’s final catch resulted in a touchdown to end the quarter 17-24.

In the second half, El Camino held Mt. SAC’s first drive to a field goal attempt which went wide left and from there the Warriors showed no mercy.

They scored another touchdown in a minute and half after the failed field goal. Though the Mounties defense pulled a crucial interception at the Mt. SAC 8-yard line, the offense was unable to do anything with it at the end of the quarter.

Far worse, the Warriors would intercept Flores at the goal line.

After exchanging interceptions, their only luck came with two minutes left in the game when Flores connected with wide receiver Reginald Anderson for a 9-yard touchdown to put more points on the board.

At 24-30, there was still a chance that an onside kick recovery from Mt. SAC’s Noah Carlton could keep the Mounties alive for some last minute heroics, but when the Warriors recovered it they let the clock run out in order to end the game.

Despite having a rough game, the Mounties stayed in it for all four quarters as their defense kept it competitive. Unfortunately for the Mounties, El Camino’s defense was just the stronger unit for this matchup.

Mt. SAC plays at home on Oct. 23 against Riverside for a chance to improve their conference record.