Men's soccer won in a defensive show match, while women's soccer dominated in a blowout 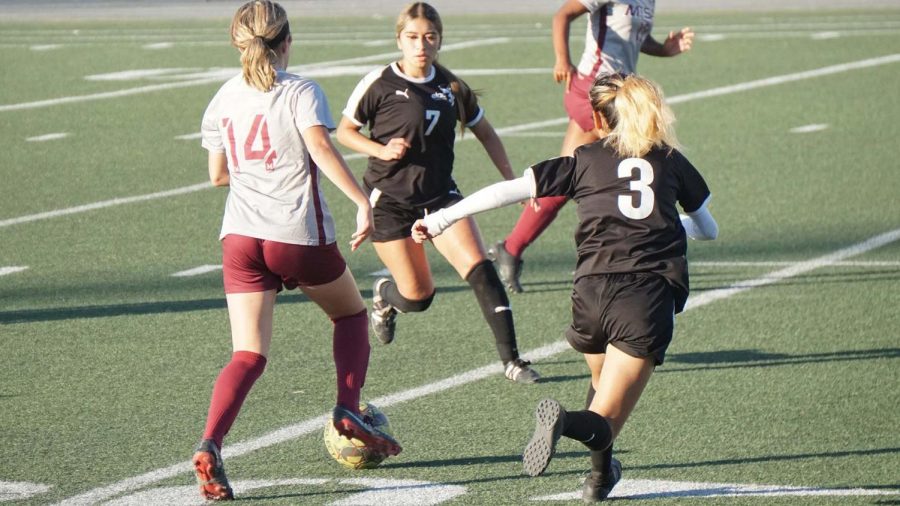 Julia Luceo (14) breaks through the Huskies' midfielders Sara Rodriguez (3) and Kimberly Romero (7) to set up another goal for Mt. SAC on Oct. 19.

Away from home, the Mounties took on the East Los Angeles Huskies on Oct. 19 and both soccer teams kept ELAC on a leash.

The men’s campaign was a slug fest where they ended the half in a defensive nil-nil stalemate.

Mounties’ Emiliano Gutierrez (13) started the half with a shot that went wide seven minutes into the game before Gabriel Arredondo (8) had his goal saved by the keeper.

Mt. SAC spent the majority of the first half on offense with blocked shots until both teams traded saves at the 30 minute mark. That marked ELAC’s first real drive of the game, which only came about because of a 34 second shift of momentum after the ball was kicked back in play by the Huskies’ Jonathan Ortiz (99).

The second half was also filled with three more saves from the Huskies’ keeper, until Arredondo got an angle in and scored the game winning goal just 74 minutes in.

His two shots on goal and crucial winning goal made him the standout player of the matchup.

Mounties keeper only had to save one goal, where Ortiz was kept to save 7 goals from Mt. SAC’s 15 shots. With so many shots, Arredondo’s game winner was just a numbers game as the Mounties’ continual pressure wore on Ortiz.

Where the men were held in a defensive show match, the women’s team had a dominance that was undeniable.

Just 11 minutes in, Julia Luceo (14) scored the first goal of the game and eight minutes later Jacquelynn Coronado (7) added a second goal. Luceo then converted on a second goal three minutes later and the Mounties kept on offense constantly in their 3-0 lead.

The second half was more of the same with Luceo assisting Deanna Rojas (2) who converted one of her five shots on goal into a goal just four minutes into the half.

With more offensive firepower, Coronado converted 57 minutes in after Luceo set her up for the fifth goal of the game. Just 15 minutes before the half ended Karissa Vela (10) went unassisted for the last goal of the game in the 6-0 win.

Mounties’ goalie Leila Peregrina (30) only played for one half and only had to save one goal from ELAC’s Evelyn Olmos (6). No other Huskies were even able to take a shot after the Mounties’ relentless offensive plays.

While the shut out 6-0 sounds bad, Huskies goalkeeper Michelle Ortiz (13) saved it from being a 20-0 decimation. Saving 14 goals on her own, Ortiz was the team’s sole defensive star and spent the full game saving shots. Coaches could be heard telling her it was not her fault and to keep going. Despite the constant pressure getting to her, as every single one of her kicks away from the goal were later returned to her, she did her best and managed to keep the Huskies from losing by double digits.

Luceo spent the game as the Mounties’ offensive star player with three shots on goal, two goals and two assists as the Mounties pressured the Huskies the whole game.

Following these wins, Mt. SAC took on Long Beach for another away game and brought home two more wins. The men’s team came out with a 4-0 win and the women’s team ended with a 3-1 victory over the Vikings.

Both teams will face the Cerritos Falcons at home on Oct. 26.