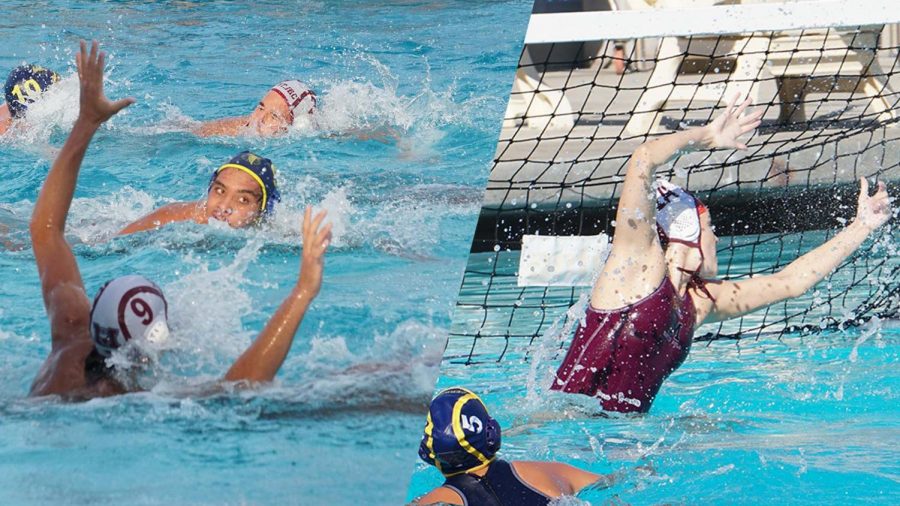 Diego Lopez (9), left, sets up for a defensive stop against the Falcons while Jahanna Palmer (1A), right, deflects a Falcons goal.

In a scenic aquatics center set with palm trees and all the amenities of the beach, Mt. SAC took on the Cerritos College Falcons for an offensive shoot out on Oct. 20.

The Mounties’ women’s team faced an uphill struggle against a dominant Falcons squad that managed to score within their first drive in the first 30 seconds of the game.

Mt. SAC’s Alexis Ramirez (8) did not make it easy for Isabella Berdote (11) to set up that drive, but her attempts to steal the ball were a bit too physical which led to Ramirez being ejected. Without her key support for the next 20 seconds, Miranda Alvarez (5) was able to sink in that goal past Jahanna Palmer (1A) to put the Falcons up 1-0.

Palmer was not having a good quarter as just one minute later another goal made it past her, but the Mounties would rebound with two successful drives. Their first successful drive started with a goal coming after the Falcon’s Alvarez was handed an exclusion to set up Grace Rowland (2) to score and reduce the Falcon’s lead 2-1 before Xen Allen (5) would tie it a minute later.

That tie did not last long as the Falcons scored two more to end the quarter 4-2.

Although the switch to Kelly Jackson (1) for the following quarter led to fewer goals against the Mounties, two more snuck in while Mt. SAC’s Allen got her second of the game.

With the half closing 6-3, the momentum was lost for the Mounties going into the third quarter. The Falcons dominated with Mia Carbajal (4) improving on her single assist and goal from the prior quarters with three more goals and an assist in the third quarter alone. Alvarez similarly assisted Keyla Santos (2) for a fifth Falcon goal.

The Mounties tried to put together some possessions, but Allen was the only player able to score for an 11-4 score with the Mounties trailing.

The final quarter was much more defensively minded with the Falcons’ Berdote and Mt. SAC’s Katelynn Howell (12) trading goals to close out the game 12-5.

Allen made up over half of Mt. SAC’s points with three goals and an assist, making her the second highest scorer in the game behind the Falcons’ Carbajal who had four goals and three assists.

A slow start ensured a struggle for the Mt. SAC squad through the opening quarters. Falcons’ Joey Hurtado (8) put the first points on the board, and although Luke Noblett (7) would fire back in the next drive to tie it 1-1, the quarter ended with Michael Reyes (5) taking back the lead for the Falcons to make it 2-1.

While this deficit still kept the game competitive, Dominic Hernandez (2) scored another goal for the Falcons, and Noblett was held to just one goal for the second quarter due to the Falcons’ defensive play. Hurtado closed out the quarter with back to back goals in the final minute to close it out 5-2.

Shouting reset at the half, the Mounties came alive for quarter three and scored three points on the Falcons with a high flying pass attack of their own. Their goals came after Seamus MacDonald (10) and Reyes scored, however, nullifying their rebound to a gain of one in the now 7-5 struggle.

Both teams would trade two more goals in the fourth to close out the quarter 9-7 with a Falcons’ victory.

Despite this, Adam Dow (14) had a strong showing with two goals and an assist, while Noblett continued his offensive dominance with three goals.

The men and women will face their toughest opponent yet, the Long Beach Vikings, at home on Oct. 27 in the last conference game before the championships begin.

The Vikings women’s team are 17-8 in the regular season and undefeated in conference at 6-0 after having handed the Falcons a 10-9 loss. They score 12 goals per game on average with 20 shots per game and have not lost an away game this season.

The men will face an 18-5 Viking squad that holds an undefeated 4-0 record in conference after having handed the Falcons a 12-7 loss. They score 15 goals per game on average with 25 shots per game while sporting a 4-3 away record. In a non conference game, this squad beat the Falcons after double overtime 18-17.

As the last challenge before the championship games, a win against the Vikings would force a first place tie in a 4-1 slugfest for the men’s team in the South Coast Conference, where a loss keeps them in third behind Cerritos and Long Beach.

A win for the women would force a 6-1 tie with Long Beach (and Cerritos if they beat Pasadena), where a loss here will keep them in third and solidify the top spot to Long Beach. Due to this loss to the Falcons, Cerritos’ women’s team can lose to Pasadena and still win the head to head against Mt. SAC even though their records would be a 5-2 tie if both teams lose.