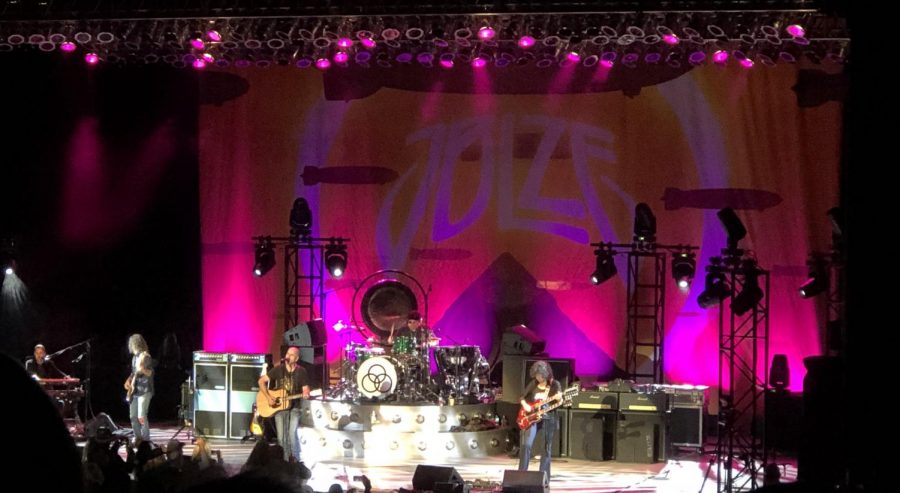 With Jason Bonham on drums, Jimmy Sakuri on guitar, James Dylan on vocals, and Dorian on bass, the band rocked the Greek Theatre with Led Zeppelin covers on Oct. 21.

On a crisp fall evening, the band opened the show with a bang. They came out to “Immigrant Song,” which is a powerful track that perfectly captures the legendary essence of Zeppelin. This song choice did a great job of setting a lively tone for the rest of the evening as the band moved into “Good Times Bad Times.”

The energy of the crowd during both of these songs was infectious. It was apparent that the audience was aware of how rare it is to hear Zeppelin songs live, let alone to hear them played by a living descendant of an original band member.

After this, Bonham took to the microphone to address the concertgoers:

“The Greek is absolutely the most beautiful place to play,” he told the audience.

His remark was greeted with much adoration because it is hard to disagree with him. The Greek Theatre is situated in a way that makes a concert feel incredibly intimate, where every seat in the venue comes with a stellar view of the stage. Located in the hills of Griffith Park, the Greek Theatre is a venue unlike any other, and it is the perfect place to hear the musical magic of Led Zeppelin.

In his opening monologue to the crowd, he also commented on how great of an opportunity it is for him to be able to play in his father’s honor as a way to keep the music of Zeppelin alive.

“It’s going to be just one of those nights – I can feel it – there’s something in the air. So, let’s get back to the music,” Bonham said.

The vivaciousness of the band was undeniable. They played with true vigor and robustness as they moved from songs like “Ramble On,” “Your Time Is Gonna Come,” and “Black Mountain Side.”

It was clear that the drummer genes are strong in Bonham. His ability to capture his father’s legendary spirit was evident throughout the entirety of the concert. In drum heavy songs such as “When The Levee Breaks” and “Four Sticks,” Bonham showcased his talents. During “Four Sticks” he played with four drumsticks, two in each hand. He briefly mentioned before performing the song that he wished to redeem himself from a previous show where he had only played using two drumsticks.

During the two and a half hours the band was on stage, Bonham added a lot of color to the concert by telling personal anecdotes about his father. He spoke on how as a young boy John Bonham’s mother took him to jazz clubs, which ignited his passion for playing the drums. A sweet sentiment, to which he further explained only occurred because his grandmother had fancied the trumpet player at the jazz club. He also told stories of how his father would become musically inspired, and what it was like to grow up with a famous dad. These kinds of comments are jewels for Led Zeppelin fans. They are a way to keep the intrigue and passion for the band alive.

When the band played “The Rain Song,” Bonham remarked afterwards how playing the track always makes him emotional. Tears lined his face as he spoke to the crowd about how the song makes him feel connected to his father.

They also played “Going To California,” which despite the absence of drums, Bonham said had to be played in Los Angeles.

“No place sings it like California,” he said. “This is your guys’ song, and I want to hear you all sing your hearts out.”

The other band members sat down on the stage to sing the ballad, while Bonham stayed behind the drums. The entire venue echoed with the crowd singing the lyrics back to the band, and Bonham recorded the entire song on his iPhone, a huge smile sitting happily upon his face.

Singer James Dylan sounded uncannily close to Robert Plant. While no one could ever perfectly replicate the uniqueness of Plant, Dylan sure did come pretty damn close. If I closed my eyes it was almost as if the 1970s rock god was up there performing, as Dylan imitated Plant’s iconic growls and pleady notes that became synonymous with the sound of Led Zeppelin.

Japanese guitarist Jimmy Sakuri, oddly resembled a young Jimmy Paige. With shoulder length black wavy hair, a long slender body, and bell bottom jeans, I initially had to do a double take to ensure that my eyes did not deceive me.

They closed out their set with fan favorites “Kashmir” and “Stairway To Heaven.”
Hearing “Stairway To Heaven” gave me goosebumps, because the power of the song is sincerely otherworldly. I felt transported to a time that was long before I was alive.

They returned to the stage for an encore performance where they played “Whole Lotta Love” and “Rock and Roll” as the crowd went nuts. To be able to experience the music of Led Zeppelin in 2021 was a blessing, and both Bonham and the audience knew that he had truly done his father’s band justice.