Men’s team was handed their first defeat, while women’s team held onto their unbeaten streak 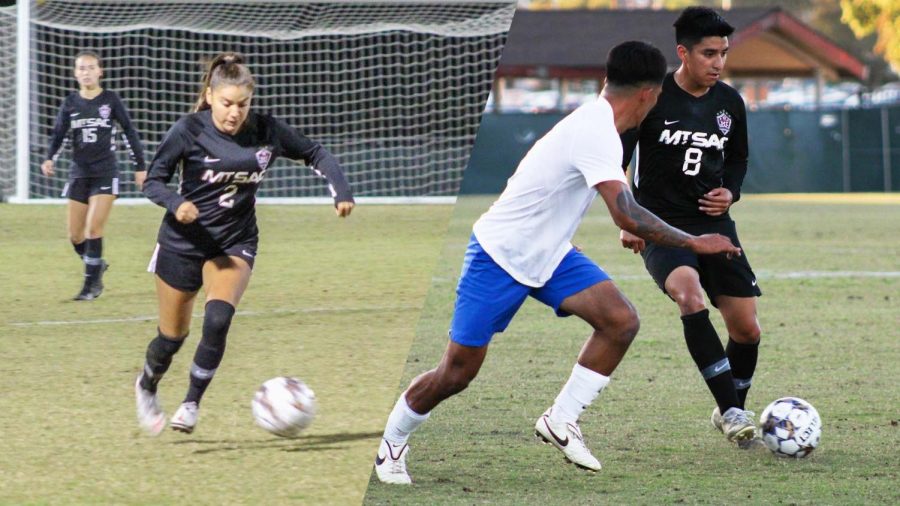 Mounties hosted the Cerritos Falcons on Oct. 26 and the results were not ideal for both the men’s and the women’s soccer team.

The men’s team were unbeaten in their last 10 games and were on top of the conference coming into this match, but the Falcons were also on a 7-game winning streak. Both teams pushed to improve their records.

This was not an easy game for the Mounties, as the Falcons controlled the tempo and played tight defense. The Mounties had a difficult time holding possession and organizing attacks.

Minutes before the first half ended, Falcons’ midfielder Martin Velasquez (8) managed to find the gap in Mounties’ defense and broke the tie with his first goal of the season.

The Mounties continued to try to score an equalizer in the second half but were not successful.

To make matters worse, the Falcons found their second goal midway through the second half. Their midfielder Arnold Castillo (10) netted his fourth goal this season.

Although the Mounties were down 0-2, they did not give up on trying to get on the scoreboard. With 15 minutes remaining, the Mounties pressed higher and took control of possession.

Yet time ran out before they could find a goal.

Mounties’ goalkeeper Jacob Cardenas tried to keep his team in the game with some saves, but the Falcons managed to get past him twice in the game.

With this defeat, Mt. SAC is now 11-2-1 overall and 5-1-1 in the conference, which is still enough to hold the top spot in the South Coast North division.

They will be looking to bounce back from this defeat against the Compton Tartars on Oct. 29.

Coming into this game, the Mounties’ women’s soccer team were on a seven-game winning streak alongside three ties. While the Cerritos Falcons had just bounced back with a win after a tough loss.

The women’s team applied pressure immediately after the whistle was blown.

Only seven minutes into the game, Falcons’ starting goalkeeper Cassandra Contreras was substituted out because she sustained a nose injury after an attempt to catch a loose ball around the 12-yard box.

However, the Mounties were unable to capitalize against the Falcons’ team who were now without their number one goalkeeper. The first half came to a 0-0 draw.

More pressure was shown in the second half, as the determined Mounties sought to stay on top of the conference with a win.

Despite the mounting pressure and attempts at goal, the Mounties were unable to get on the scoreboard. Although this game ended their winning streak, their unbeaten streak continued to 11 games.

Mounties’ goalkeeper Leila Peregrina made two saves this game to help keep this streak going and added one more shutout to her resume. She now has her ninth clean sheet of the season.

They will host the Compton Tartars on Oct. 29 at home.