Mountie Soccer Teams Back on the Winning Side

The men’s team dominated, women’s team held on to win 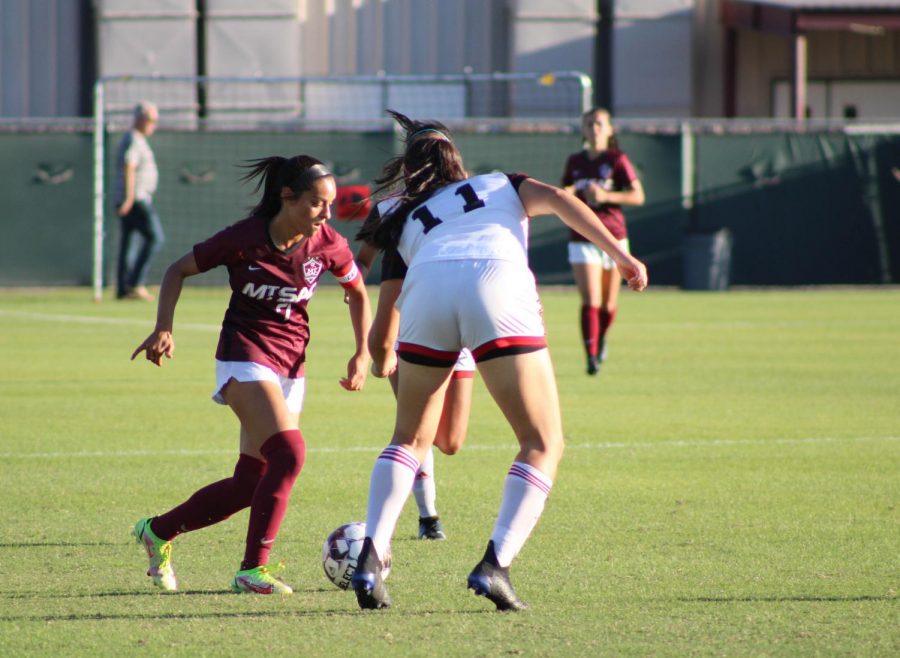 Captain and midfielder Jacquelynn Coronado (7) tried to dribble past a defender in a Mounties attack.

Mt. SAC Mounties hosted the Compton Tartars on Oct. 29 and tried to highlight the sophomore players’ talent for this Sophomore Night game.

After suffering their first conference defeat, the Mt. SAC men’s soccer team made a statement against the Compton Tartars. Their performance let everyone know they are still a force to be reckoned with.

The Mounties got off to a fiery start as soon as the whistle blew, literally, as a vehicle caught on fire in the parking lot about the same time the match began. The referee then decided to pause the game momentarily just a few minutes in because the smoke and smell from the burning car was invading the pitch.

After the restart, both teams were trying to find their tempo again, but it was the Mounties who struck first.

About 16 minutes into the game, they managed to take advantage of a Tartar mistake in the back to open the scoreboard. Midfielder Eddie Cabrera (19) took control of the ball after a bad clearance by a Tartar defender and netted in his second goal of the season.

Once the scoreboard was opened, it did not take long for Mounties to keep the score going. Just eight minutes later, Cabrera (19) got possession of the ball from another poor clearance and passed it to another midfielder Alex Mendez (23), who bent it into the net for his fourth goal of the season.

Another eight minutes later, Roberto Mejia (5) dribbled to the goal line and delivered a pass into the six-yard box. This set up a tab-in opportunity for forward Edward Castro (11) to score, which he did not miss. It was his eighth goal this season.

Right before the first half ended, the Mounties got a corner kick, which they took a short one. Mejia (5) then delivered the ball into the penalty box, which was found by midfielder Giovanni Gloria (25), who scored to open his scoring account this season.

At half time, Mounties led the Tartars 4-0.

The team did not relax – even with a 4-goal lead. They scored another goal as soon as the second half started when midfielder Matt Palos (24) found Castro (11) to score his second goal of the match.

Just 20 minutes into the half, Mounties made a goalkeeper change, Jacob Cardenas (1), who made three saves, was substituted out and Ryan Monlina-Castillo (0) came in to guard the goal the rest of the game.

The final goal came 66 minutes into the game, Cabrera (11) got his second assist in the game when midfielder Uly Perez (20) shot and scored from outside the box for his second goal of the season.

Although the Tartars tried to organize attacks, the Mounties managed to hold them off. Molina-Castillo got two saves to help the Mounties keep a clean sheet.

Mounties’ men soccer team is now 12-2-1 overall and 6-1-1 in conference. They will play an away game against the second place Rio Hondo on Nov. 2.

Mt. SAC’s women’s soccer team made sure that their families had good memories of Sophomore Night as well. Although the scoreboard was not as one-sided as the men’s game, they still managed to come out victorious.

The Mounties opened the score early, only seven minutes into the game when midfielder Audrie Mahassel (16) scored for the first time this season to put Mounties up 1-0.

The Mounties pressed high and kept attacking, but unfortunately luck was not on their side. Midway through the first half, on a rare attack by the Tartars, they scored to tie the game at 1-1.

The initial shot was saved by goalkeeper Leila Peregrina (30), but on rebound the ball got through allowing the Tartars to equalize the game.

The Mounties responded by pressing harder and staying mostly on offense. Their hard work was rewarded right before the first half ended.

Forward Alyssa Williams (24) managed to score her third goal of the season and put the Mounties back on top 2-1.

During the second half, the Mounties continued to attack downfield, but had no goal to show for it. Toward the end of the game, Tartars’ goalkeeper Meliza Lopez (1) got injured after a collision with Mounties’ forward Adriana Romero (27).

The game was stopped when Lopez went down holding her left shoulder. Though she tried to continue, she eventually had to be substituted out. The Mounties could not make another goal despite the loss of the Tartars’ keeper, which made Williams’ goal the game winning goal.

Mounties’ goalkeepers Gabrielle Leon (0) made one save and Leila Oeregrina (30) made three saves to prevent the Mounties’ Sophomore Night being ruined by a tie or loss.

The Mounties’ women’s soccer team has extended their unbeaten streak to 12 games with the record of 12-2-3 overall and 7-0-1 in the conference.

They are holding the top spot in the South Coast North division over Rio Hondo, whom they will play against on Nov. 2.