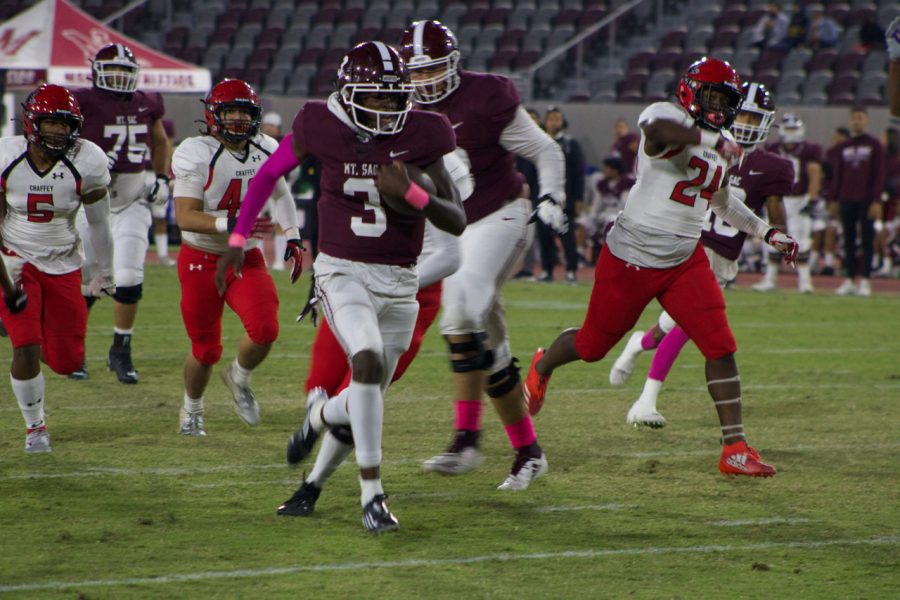 Despite the Chaffey College Panthers being named as the college’s opponent for this matchup, Mt. SAC truly faced off against the referees for all four quarters and overcame 15 of the 22 penalties that were called on Oct. 20.

Unlike the game against the Riverside Tigers, where the Mounties racked up four of the 13 total penalties, the referees really tried to give the Panthers their first win of the season.

After a 7-yard quarterback keeper from Chaffey’s Kevin Lukasiewicz (17), a call was instantly made against Saliato Tuia (94) for unnecessary roughness despite it being clear that Chaffey’s John Gill (75) clocked Inoke Katoa (92) despite Katoa not even being near Lukasiewicz.

This essentially made the play a 19 yard gain – and an automatic first down – despite Chaffey having started the initial return drive with a hold. Most penalties against Chaffey were declined if they even got called.

Not to be soured, the Mountie defense held them to those gained penalty yards and little further.Tuia and Joshua Taylor (45) made a critical stop on a 3rd and 3 at Mt. SAC’s 10-yard line, which made the Panthers lose two yards and forced them to try for a field goal. Their kicker was unsuccessful in converting the field goal and hooked it wide left.

Keeping up the momentum from that crucial stop, no one could contain quarterback Ike Udengwu III (3) as he made a 74-yard touchdown run.

Chaffey had no answer to that drive and both teams exchanged punts. The Panthers got some momentum back their way after a fourth down stop on their own 25-yard line, which led to several drives for Lukasiewicz to move the ball downfield until he was able to connect to Aaron Miranda (80) for a touchdown to equalize the game 7-7.

While Chaffey got a penalty on their kickoff for kicking it out of bounds, their kicker Jocob Meneses (49) equalized the lost yardage by kicking the ball further.

Still, the Mounties pushed all the way down to the Chaffey 4-yard line where the Panthers stood their ground to force a field goal.

After another Chaffey punt, the Mounties drove the ball back from their own 17-yard line by running the ball downfield (despite one penalty pushing the ball back 15 yards) until Udengwu III was able to reach Jaden Allen for an 8 yard touchdown for a 17-7 lead.

The Panthers were then held to another punt and the Mounties offense wasted no time in converting this gift from Mt. SAC’s defensive unit.

Things would not go as they seemed, however, as one Chaffey player was carted off the field after taking a hit and the referees decided that warranted tacking on penalties on three consecutive Mt. SAC drives.

An incomplete pass was not enough for the referees as they called holding against Ben Martinez (75) for a loss of 10 yards.

When Nicholas Floyd (41) took off in the next play for a 36 yard run, the referees halved it and said there was an illegal block.

Running out of things to call, they ended their last penalty of the play by calling a false start to push the Mounties back 5-yards.

None of that could stop Udengwu III and the high powered Mt. SAC offense, however. They would continue to move the ball downfield until Floyd had the chance to run in the ball to end the half 24-7.

Despite some issues with the scoreboard clock, Mt. SAC wasted no time and even had their defense put more points on the board. After a hike went awry for the Panthers, Tupu Alualu (90) recovered the fumble and got the ball the remaining 27 yards for a fourth Mt. SAC touchdown to put the lead at 31-7.

From there, the Panthers were again forced to punt, but their secondary started to force the Mounties to punt as well.

In between the exchanged punts, the referees managed to tack on a 15-yard penalty against Diego Jimenez (70) to yet again punish the Mounties.

When a Chaffey player flat out punched a Mountie and that Mountie responded, the referees called that offsetting so that Mt. SAC would not gain a yard.

The very next play, a three yard rush, got another 10-yard holding penalty to slow the Mounties down.

Udengwu III and the offense did not care about these penalties, however, as they took each setback in stride even though it ensured that yet another play was turned into a punt,

After another Panthers punt, Mt. SAC found penalties finally going their way as an unsportsmanlike conduct penalty against Chaffey for their antagonism finally gave the Mounties 15-yards.

After a few more runs, Kuran Johnson (39) ran in the final score of the game on a 6-yard rush.

Before the game ended, quarterback Ethan Hery (16) was put in only to see more penalties against Mt. SAC.

With two more penalties setting the ball back, Hery was unable to get enough forward momentum and got picked on a 2nd and 25 at the Chaffey 30-yard line.

That interception closed out the game as the clock winded down. Mt. SAC beat the Panthers 38-7.