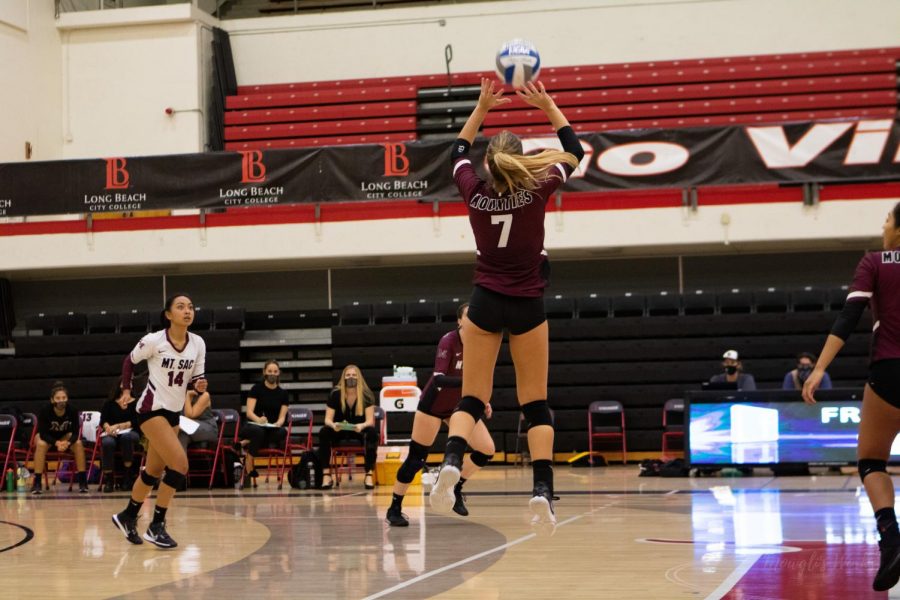 Setter Ally Euston (7) prepares the ball for a Mt. SAC spike against the Long Beach City Vikings on Oct. 29.

The Mounties came ready to play against the Los Angeles Harbor Seahawks at home on Oct. 27 before taking on the Long Beach City Vikings just two days later on the road. Mt. SAC came into these games having won seven out of their last eight games, but these two games were going to put their hot streak to the test.

The first set against LA Harbor left no doubts for the Mounties. They were up by 10 points and retained that lead all of the first set to get the win with a score of 25-15.

The second set was a different story. It was back and forth action the whole first half with lots of highlight plays, including some ridiculous spikes by Michelle Walters (24) and Riley DeGroot (20). Mounties took a narrow 15-13 lead, but that’s when they went on a run to open the game wide open. Mounties would then score seven out of eight points to take a 22-14 lead. Although the Seahawks did climb back into the match, the Mounties held on and won the set 25-21.

The third set could have possibly been one of the best Mt. SAC has played all season. With some amazing defensive plays and by taking full advantage of some poor hits by the Seahawks, the Mounties won the set 25-13. This win gave them lots of momentum heading to Long Beach for their matchup on Oct. 29.

The first set against the Vikings gave off some fireworks right from the beginning as well. It was obvious this was going to be an exciting matchup. The energy of the crowd, the enthusiasm on the benches of both teams and the incredible rallies both teams displayed were dynamic.

Mt. SAC ended up pulling away and winning the set 25-17. From looking at the scoreboard it seemed like this would be another sweep for the Mounties, but the Vikings of Long Beach City were not going to let that happen.

The second set started off tight with no team pulling away from the other. The score was tied at 8-8 before the Vikings went on a 6-0 scoring run to regain the lead at 14-8.

That’s when the momentum shifted.

Mt. SAC did make a run to only be trailing 20-18, but another run at the end by the Vikings gave Long Beach City the second set victory with the score of 25-19.

With the crowd and energy shifting to the Vikings, the Mounties found themselves in a minor hole. This third set had to be one of the top five most entertaining sets the Mounties have played all season. It felt like an instant replay of the prior set.
The score was tied 12-12 and the Vikings went on another run by outscoring the Mounties 10-4 in order to give themselves the lead 22-16. Hope seemed to fade for the Mounties from the audience’s point of view, but the Mounties knew they had it in them to come back.

The Mounties finished the match on an unbelievable 10-2 run to win the set 26-24 and left everyone in the gym in shock.

The run was led by three key players for Mt. SAC, DeGroot (20), JJ Quarrels (11), and Allison Whiteman (23). This was a crazy match filled with lots of energy, and it took the wind out of the sails of the Vikings.

The fourth set was another masterpiece as both teams put their skills on display in the crucial game deciding matchup. The Mounties had the lead 12-9 and that’s when it came time for the Mounties to give the Vikings a taste of their own medicine. Mt. SAC ended up going on a 10-4 run just as Long Beach City did to the Mounties in the third set.

This run gave the Mounties a 22-13 lead, and they did not look back. The Mounties won the match 25-18 to win the series 3-1 over Long Beach City College.

Long Beach City gave Mt. SAC a run for their money, but it was the Mounties who sent the Vikings sailing. After these two victories, the Mounties have won nine of their last 10 games and took on the high flying Falcons of Cerritos College on Nov. 2. The Mounties also ended up winning that game in a clean sweep similar to their dominance against LA Harbor.