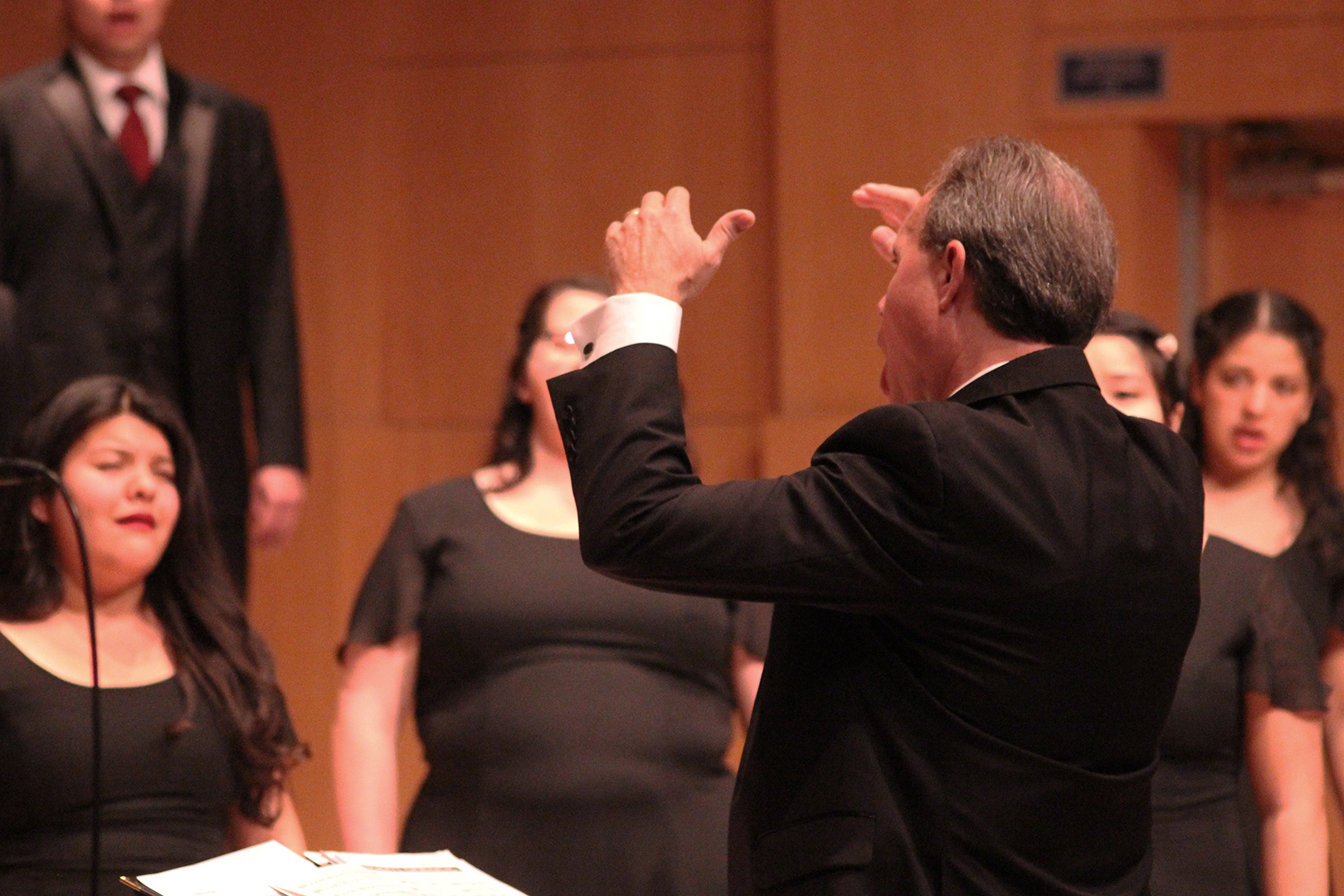 Conductor Bruce Rogers, directs the Chamber Singers on their final set at the Spring Choral Concert on May 31, 2019.

The show began with a Concert Choir’s rendition of Australian composer J. Michael Haydn’s “Beatus Vir.” The ethereal song acted as a precursor for the rest of their performances as they moved into “Tu Sangre En La Mia,” a beautiful poem by Chilean poet and politician Pablo Neruda.

Following this strong start, director William McIntosh took to center stage and addressed the crowd. He exclaimed how happy he was to be back performing before praising his choir, the pianist Kevin Wiley and all the other performers. The Concert Choir closed out their performance with “The Peace of Wild Things,” “Like a River” and “Take Me to the Water.” The latter of which was very lively and sounded gospel-like in nature.

Director Rebecca Tomlinson introduced the ensemble and spoke briefly about the songs that were chosen for the performance. After beginning with “Jubilate Deo” by Michael Praetorius, Tomlinson then spoke about Emily Dickinson’s poem, “Hope is the Thing with Feathers.” She mentioned how Dickinson was largely unknown for her literary skills while she was alive, and only received much success posthumously. This piece had a beautiful message, and the vocal range of the ensemble complimented the essence of it perfectly. They closed out with two more songs before another familiar group took the stage.

Fermata Nowhere, the nationally recognized male a cappella ensemble, began their performance with “Ubi Caritas” to keep on theme with the orchestral and symphonious song choices for the night. They also broke from that traditional style when Fermata Nowhere performed “Who’s Lovin You” by Smokey Robinson, and it was a welcome change of pace. Soloist Daniel Muñoz sang with soul and bravado as his fellow ensemble members offered background vocals.

After a brief intermission, the Chamber Singers walked onto the stage where director Bruce Rodgers talked about the themes for the upcoming songs and how happy he was to be back performing for live audiences. He then added that the song choices were made while reflecting on the hardships we have all faced over the past two years.

The initial theme of the performance was entitled “The Faithful” and featured songs like “Laudate Dominum” to demonstrate the power of faith. Rodgers also spoke briefly about the next song, “Crucifixion,” and explained that the song was written by a slave, Adolphus Hailstork, and that it was a rather powerful and passionate recount of what the crucifixion must have been like for Jesus Christ. The essence of the song was heartfelt and there were soulful undertones throughout the number.

The Chamber Singers then moved into the next theme of their performance which was listed as “In Tribute” for the lives that have been lost due to COVID-19 and the Sept. 11 attacks.

The lights of the auditorium dimmed as the singers clung to candles for a somber performance of Z. Randall Stroope’s “In Paradisum.” As the song ended, the singers moved down from the stage and outlined the perimeter of the venue encircling the audience. They followed this performance with a number called “Healing Light” about the power of the Earth and its healing properties. The ambiance of the room created a reflective mood as percussionist Chris Gomez softly beat upon his drum.

Afterwards, the Chamber Singers moved into their third theme: “The Persecuted.” It began with a number entitled “De Profundis” followed by “Even When God Is Silent” and “Say Her Name.” The last performance referenced a poem written by Alysia Lee to bring awareness to police brutality against black women. Soloist Ahilitney Lucas-Krebs sang with power, gumption and emotion as the Chamber Singers concluded.

The final theme was “Hope,” an optimistic conclusion to the previous themes. They played two songs, “Can We Sing the Darkness to Light?” and “Soon We Will Be Done.” Both choral performances contained messages of resilience and positive aspirations.

The four themes of the Chamber Singers told a story about living a life of meaning and the contemplative nature of finding such significance in a turbulent world.

The performing arts center has a number of shows planned for the rest of November, with their next performance of the Fall Vocal Jazz Concert scheduled for Nov. 20 at Clarke Theatre. After prolonged postponements due to COVID-19 it is nice to see student expressivity back on campus.