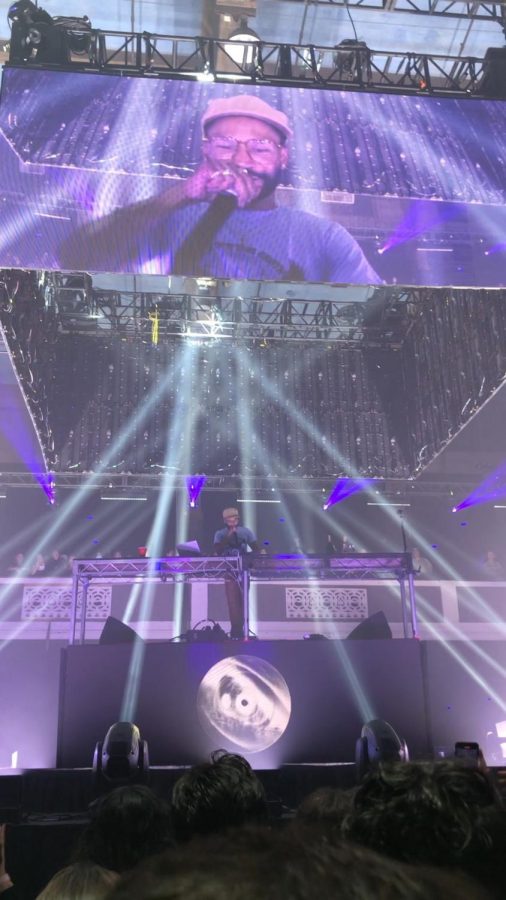 Kaytranada addressing the crowd at his Oct. 30 show at The Shrine Auditorium in Los Angeles

Kaytranada returned to Los Angeles for two sold out concerts as a part of his Autumn ‘21 tour. Originally scheduled to perform one night at The Shrine Auditorium on Halloween, the Canadian based DJ added another show on Oct. 30 due to popular demand.

As I approached the line of fans waiting to pass through security, a huge grin creeped upon my face. The crowd was vibrant, ecstatic and dressed in an array of costumes. You name it and someone in the crowd came dressed as it – witches, pirates, fairies, cartoon characters, clowns – everyone was decked out for Halloween. The enthusiasm for the concert was evident and the energy was infectious.

Despite the amount of people, the line moved rather quickly, and I made sure that I had my vaccination card at the ready. Both Los Angeles shows were fully vaccinated events, yet I couldn’t help but wonder how many people had found a way to skirt the system to attend the concert. Security seemed to look at vaccination proof with glossy eyes, simply going through the motions, but I tried to have faith in my fellow concert goers that we were all taking each other’s health seriously.

Once I was through security I walked into The Shrine and noticed what a unique venue it is. The vast openness of the concert floor seemed more akin to a long dark hallway, with an upper level looking down upon the mischief that was about to take place. The stage could be placed at either end of the floor, in the corner, or even off to one side.

However, Sango, the opening performer, had the stage placed directly in the middle of the floor. He played for about an hour as the crowd danced around amicably and wandered over to the cocktail bars that line the perimeter of the venue. Sango’s sound is unique and contemporary, a mix of hip-hop, soul, funk and electronic music, and a perfect addition to Kaytranada’s tour. It was clear, however, that the crowd was there for the headliner.

After the opening act, the venue began to fill up and it became more crowded. It had been a while since I had been in such close proximity to sweaty strangers. The only concerts I had been to post COVID had assigned seats, and I felt apprehensive about a general admission show as it seemed almost like a no man’s land; still I felt invigorated. I was bubbling with excitement in the moments leading up to his performance.

Kaytranada is not your typical DJ. He strays away from the same sounds that have come to color electronic dance music. His music has soul and his sound is a mixture of low-fi hip-hop samples, R & B, and funk. Kaytranada’s groove is almost irresistible, and it’s something that you cannot help but dance to.

When the lights finally dimmed and the background music faded out, the crowd swelled around the stage in exhilaration. I noticed what a great view I had as the colorfully dressed audience settled into their respective spots. The decision to place the stage in the middle of the venue was ingenious because it made the performance feel much more intimate.

Kaytranada graced The Shrine wearing a blue graphic tee, khaki pants, and a baseball cap, the effortlessly classic cool guy uniform. He had a huge smile plastered on his face and it was clear how at home he felt on stage. A soft blue light washed over the screaming crowd as he opened up his set with “Worst in Me,” a song off of his 2019 sophomore album “Bubba.”

He played a slower rendition of the song, as if he was easing the crowd into the awesomeness that was about to take place. The stage remained moody as fans began to sway to the beat. And to my surprise, his DJ booth began to slowly spin around in place, so that from anywhere in the venue Kaytranada would eventually face you head on.

He then moved into “Freefall” also off of “Bubba” and the stage lit up with a whole spectrum of colors. The screen above the stage mirrored Kaytranada as he deejayed. It outlined him in real time, along with psychedelic colors and trippy visuals of mushrooms and wildlife in the background. The screen wrapped around the DJ booth and it was adorned with electric butterflies, glitching rainbows, and dancing robots. His visuals acted as a perfect complement to his music – a tangible representation of the vibe that he was sharing with the crowd.

As he eased into his set the audience was completely enamored and cell phones were mostly tucked away. His music was captivating, and the crowd seemed to be in the moment. There wasn’t a still body in sight, everywhere I turned people were dancing and smiling.

He played a few more songs off of “Bubba” – which won him two Grammy’s in May 2021. The album is a work of art. The transitions from song to song are seamless, and he performed his set with the same kind of oomph. He blended each record into the next with precision and ease.

Kaytranada played songs like “Dysfunctional,” “Chances” and “If (Janet Jackson Remix)” as a sort of homage to the music that preceded his first album “99.9%.” Sipping Dom Perignon out of the bottle, and occasionally addressing the crowd, he was having the time of his life.

He went on to play fan favorites off of his album “99.9%” such as “Lite spots,” “Glowed Up,” and “You’re The One.” He also performed his single “At All,” which he mentioned was a personal favorite of his, and the entire stage became covered in flashing rainbow visuals that danced around on the faces of the crowd.

Kaytranada knew to play his hits like “Be Your Girl,” and “10%.” Towards the end of the concert he even played a new song that he told the audience, “You guys are gonna experience it, my first time playing this.”

Moving from track to track, effortlessly merging one groovy beat with another, Kaytranada masterfully controlled the audience. His ability to create a show that was so seamless from start to finish was awe inspiring, and the crowd was in love.

But as he wound down, he exclaimed how much fun he had. Performing for about two hours, Kaytranada did not disappoint. He put his heart and soul into his set, and it was evident that he meticulously picked each song to perfectly fit the vibe for the evening. As the sensual and syrupy beat of “Girl” played over the speakers, it was a fitting way to end a very dreamy night.

From start to finish, the Kaytranada concert was almost flawless; it was the complete package. A perfect setlist, unique visuals and an intimate venue.