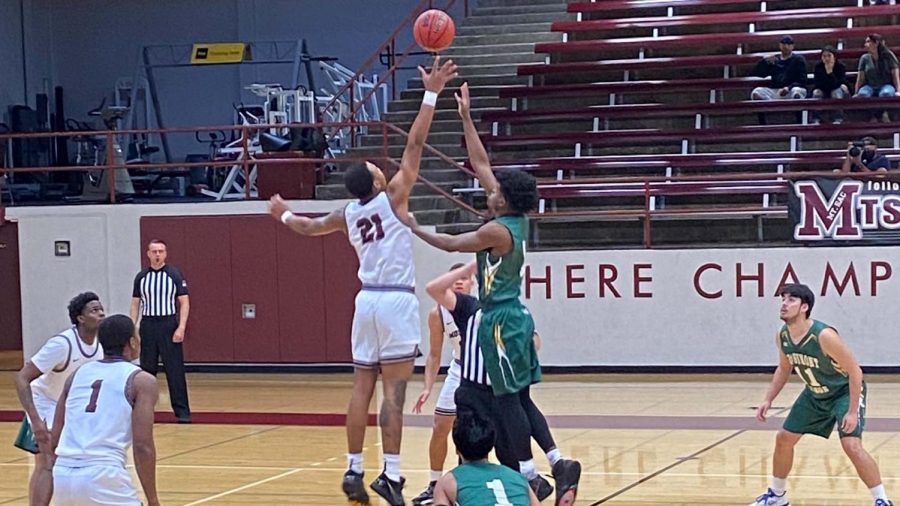 Forward Dyren Brown (21) takes possession of the ball over Grossmont on Nov. 12.

Mt. SAC men’s basketball opened their season against the Citrus College Fighting Owls on Nov. 4. With both schools only 7.5 miles away from each other, this game had a lot of fans and players excited.

It did not start out the way the Mounties wanted. Mt. SAC had 12 turnovers in the first half and the Fighting Owls took advantage. It was also very difficult for Mt. SAC to defend against Citrus as they had three players score double digits in the first half.

It seemed that Mt. SAC just could not get around the Owls, and Mt. SAC found themselves down by 20 points at the half at 54-34. Mt. SAC’s Shaquil Bender (1) was doing his best by carrying the Mounties by scoring two 3-pointers to score 18 of their 34 points by himself.

Since college basketball is a tale of two halves, it was a good sign that the Mounties looked a lot better in the second half.

Mt. SAC got a huge spark from Christian Jones (13) and Khalid Wilkins (24) off the bench to try and get the Mounties back in the game. The Mounties actually made a big comeback to cut the lead down to single digits late in the second half, but Mt. SAC just had no answer for Citrus’ Leonard Turner (25) and his 25 points.

Citrus held on to the win at their home court with a final score of 93-79.

Mt. SAC’s next game was at home on Nov. 12 against Grossmont College as a part of the Gene Victor Tournament.

To begin the tournament, a moment of silence was held in honor of former Mt. SAC basketball coach Gene Victor. Victor had died at the age of 95 on April 24 of this year and left behind a 57 year coaching legacy, where he had even helped invent the passing game in 1953. Shortly after, Mt. SAC and Grassmont headed to the court to begin the second game of the Gene Victor Memorial Classic.

Although Mt. SAC won the tip, Grassmont quickly stole the ball and made the first two points of the game. Edmonson (10) and freshman Justyn Hunter (5) stepped up and led the team in points during the first half. The pair combined for a total of 22 points in order to put the Mounties up by 23 points at the end of the half.

Bender (1) led the team in points in the second half, netting a total of 13 points to seal the win against Grossmont. The Mounties won 81-57, which allowed the Mounties to proceed to the championship game of the tournament against Golden West.

The Mounties would continue on to beat Golden West and come out victorious in this tournament. Bender (1) led the team in points, scoring a total of 22 points, while Edmonson (10) led the team with three assists in the 94-78 victory.